Burmester invited us to visit Berlin when launching the new BC150 floorstanding loudspeaker  – you can read an earlier version and exclusive preview that formed the basis of this review here. This new speaker design is an impressive statement; not only in terms of its physical presence and its £97,500 price tag, but in the sheer amount of research and development engineering that went into the project.

Just a look around the specification sheet shows why the BC150 is notable. Each BC150 weighs in at a shade under 200kg, a figure achieved by using a combination of aluminium, MDF, and steel (where appropriate) for a cabinet. This trio of materials combine (aided by some carefully chosen visco-elastic materials) making a cabinet that maximises the benefits of all three materials while minimising their own respective downsides. An aluminium frame with MDF housings and steel plates, carefully bonded together is a rare and uniquely successful approach in making a cabinet as non-intrusive and non-interactive as possible. 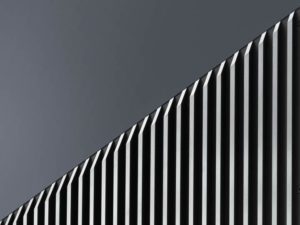 Each component or subsystem in the BC150 is given the same uncompromising, obsessive-compulsive approach to design and engineering. Alongside the two AMT folded ribbon tweeters (one front firing; a second, smaller and rear-mounted for adjusting spatial properties in room), the midrange is heavily modified to Burmester’s exacting specifications. That last sentence needs exploring; usually ‘heavily modified’ means “can you put our name on the front of the basket?” not “can you change the dust-cap for a phase plug, can we make that phase plug oval, and can we revise the doping materials on the paper of the cone, please? Thanks!”. In fact, when it comes to the side-firing bass unit, the company making the driver liked Burmester’s changes so much, they retrofitted many of them (such as beefing up the magnet) into its own designs.

The crossover too, shows just how seriously Burmester is taking things with the BC150. The board is large, populated with the highest grade components (many of which are ‘potted’… more on that later) and then sits on its own suspension system within its own chamber inside the loudspeaker. Short of playing the loudspeaker during an earthquake, nothing’s going to trouble that crossover. Furthermore, because it’s going to have to handle some high power, everything is built to last. Perhaps the adjustment for the rear-firing tweeter highlights this best; rather than a simple potentiometer mounted in the rear of the speaker, Burmester went the extra mile and built its own stepped attenuator. No one else does this!

Those aforementioned potted capacitors are a part of Burmester going the extra mile once more, in that the BC150 is one of the few passive loudspeakers to achieve UL certification. This means every aspect of the loudspeaker needs to be tested for fire safety, and usually applies to electronic components. Granted, if you are sufficiently infernoed to be concerned about the potential for loudspeaker terminals or internal capacitors in a crossover network to either catch fire or release toxic fumes, it’s probably already a bit late, but the fact Burmester even considered going the distance on this is impressive in its own right.

One of the things you should get from all this is that the engineers in Burmester are driven by passion, and it’s a passion that is shared by the people who end up buying the loudspeakers and enjoying them. OK, few engineers are unmotivated by their own projects, but to create a project like this, you need engineers who will spend hours on end talking about the design of the BC150’s feet, and how many iterations they went through to create the right dial-in adjustable foot sitting on its own bearings. They’ll even tell you about the creation of the tool used to adjust that foot with the kind of bright-eyed enthusiasm you might use to describe your child’s first day at school.