IsoTek has a significant range of power products, but perhaps the one that has always been resoundingly popular is the Aquarius. Its predecessors – the Mini Sub and then GII Mini Sub – put IsoTek on the map. Both the Mini Sub models and subsequently the EVO3 Aquarius that followed were conditioners admired by those most reluctant and curmudgeonly of power product buyers – Naim Audio users. Having been programmed not to like the idea of power conditioners by Naim’s most zealous supporters, they bought the Mini Sub and EVO3 Aquarius in droves. However, time moves on and the EVO3 line is making way for the V5 models from IsoTek and they come in their spiffy new livery. How will IsoTek’s buyers react?

The IsoTek EVO3 Aquarius was first debuted at the Munich High End Show in May 2009 and officially released to market towards the end of 2009. Since then, EVO3 Aquarius has been considered a benchmark for mains cleaning as it represents that sweet spot of performance and value for money – not only within just the IsoTek range, but in a wider context. 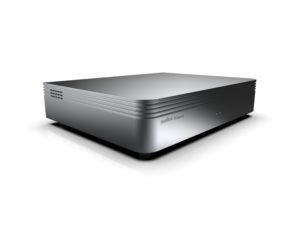 V5 is a bold departure for IsoTek. The company has used a very similar case work for its products throughout the 21st Century. It’s established as IsoTek’s ‘look’… and the V5 line migrates from that look completely towards something far more ‘now’; cleaner lines, curved edges, all very modern and minimalist. There’s the option to have the IsoTek V5 Aquarius in black or silver; it has previously been available in black and silver, but until V5, the black version always looked like a bit of an afterthought (at least, it did to me.) Not so now – it is rightly marketed as a beneficial feature.

Today’s V5 Aquarius is a multiple power cleaning system, featuring six independent power cleaning networks in a single chassis, two outputs running for high-current devices such as power amplifiers, while the remaining four are designed for preamplifiers, source and network components. As with the EVO3 it replaces, its role in life is to reduce Differential Mode Mains noise, and the risk of cross-contamination between individual inputs, so that the connected loads do not influence each other’s performance.

The V5 Aquarius, along with the rest of the new V5 range, might be the product of a total redesign from the ground up, but it still stays true to the company’s design principles. This meant IsoTek’s team subjected the EVO3 Aquarius to rigorous questioning to reconsider and ultimately improve its job in hand, the result being the V5 Aquarius. It appears no single element was overlooked in the V5-ification process!