Integrated amplifiers are a favourite category of kit for me. For many audiophiles, it is simply not practical to find a home for a huge power amplifier along-side an expensive pre-amp and then outlay a bundle on the requisite cables to string the system together. The process is either a space or a budget buster and let’s not bring up the ‘WAF’. Despite this, integrated amps get a bad rap in some audio circles. No ‘true’ audiophile could claim that title and compromise with ‘just’ an integrated. On the other hand, the discerning audiophile can one up his snobby brethren, buy an integrated, and free up more cash to spend on other gear or, gasp, more music. 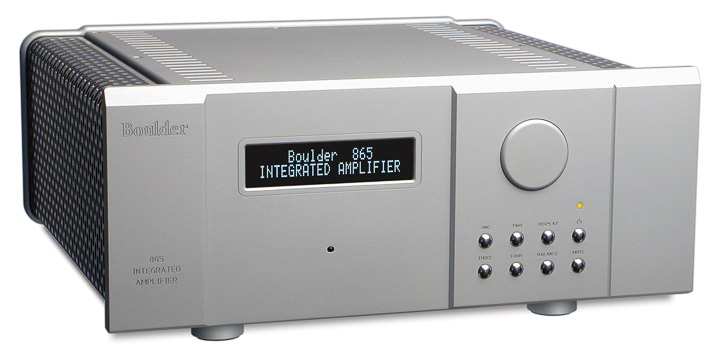 That doesn’t apply with Boulder Amplifiers’ 865 integrated amplifier. Not only is this stunning example of audio bliss an integrated, it is a venerable one too. First reaching the market all the way back in 2008, and it has remained unchanged since its release. Our justification for visiting the amp is the brand has only recently returned to UK shores. It also shows how much things have changed in the audio world: when it was first available, the 865 was at the very top of the category price-wise, but is now eclipsed by many larger price tags. The 865’s longevity comes as a refreshing change in these changing times, where products seem to have ever-shorter shelf lives. Finding gear that stands the test of time proudly and without compromise is a rarity and one that is greatly appreciated.

The 865 benefits from both the tech and culture from of America’s most respected manufacturers of ‘bespoke-class’ gear. Boulder Amplifiers was founded in 1984 with a design team steeped in pro audio. All their gear is in-house designed and hand made by their own staff in Boulder, Colorado. Aspects of the 865 are found on other Boulder components costing 15 times the price of the 865!

The 865 is housed in a 25.5kg case of brushed aluminium sculpted in a striking and timeless industrial design. The 865 brings 150 Watts at eight Ohms and 300 Watts into four Ohms, making it suitable for most any speaker you might consider using. The optically connected volume control knob is almost flush with the case and spins with no resistance. Care must be taken not to spin it too vigourously as the volume will ramp up almost instantaneously throughout its two hundred step attenuation range. Eight buttons grace the front; Power, Mute, Balance, Display, and inputs one through four. The two layer LCD panel is clear and easily readable across the room and its brightness is adjustable. The rear panel features 6.35mm speaker binding posts (Spade connectors are highly recommended), four pairs of 3-pin XLR balanced inputs; a pair of balanced outputs for bi-amping, adding a subwoofer, or pre-amp only functionality; and a Master/Slave switch to use with Boulderlink to connect to an additional power amplifier. A handsome aluminium IR remote works flawlessly.

After spending some time with the manual, I hooked up my AudioQuest CastleRock spade-ended speaker cables to my reference Vandersteen Treo CT’s. Additional AudioQuest balanced cabling connected the PS Audio DS DAC and Oppo 105D disc player to inputs one and two. Unbalanced devices such as a turntable and phono pre-amp can be accommodated using a Boulder unbalanced input cable to convert single ended to balanced.

The pre-amp functions of the 865 are simple and elegant. Switching between inputs is one-button action from either the front of the unit of via the remote control. There is no delay. Moving from the PS Audio DS DAC to the Oppo 105D, the 865 had no issues with immediate switching and there was no unpleasant volume mismatch to beware of between these two balanced sources. I did not have a second Boulder amplifier available to check out the Boulderlink. The 865 can also be used in ‘Theater’ mode should you choose to integrate it into a surround sound system.

Great amplifiers imbue a speaker with a sense of ease. Music flows without any strain or hesitation. This feeling of natural immediacy was evident from the beginning of ‘Landslide’ from the eponymous Fleetwood Mac album [Warner Bros.], a classic I have enjoyed for almost forty years. The finesse and clarity of the acoustic guitar propelled the song along framing the electric guitar. Stevie Nicks’ voice had that undefinable ethereal quality that makes it so distinctive. The 865 gave terrific space to this song. The effortless presentation from the 865 matched the song’s intimate nature beautifully. Creating a presence of sophistication is usually the purview of separates. A top flight integrated like the 865 is also able to bring these qualities without compromise. 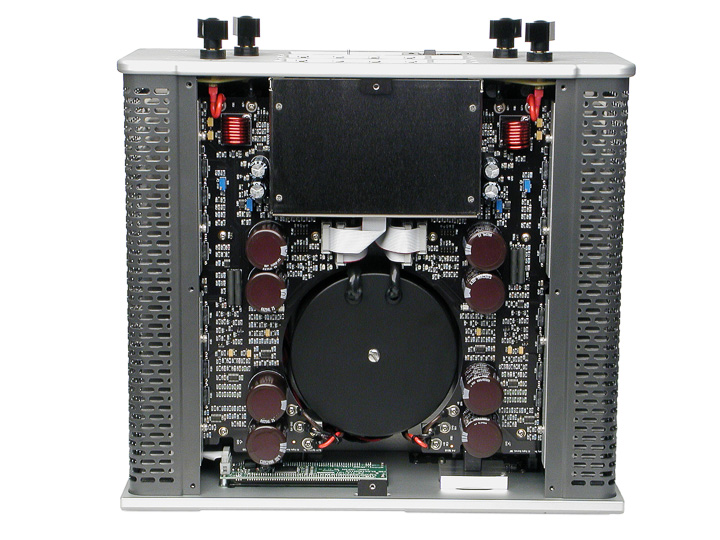 Another requirement for a top end amp is the ability to provide both power and grip to low end sonics. I am not interested in flabby bass. I want instant response and control. Stygian depth is what I received from the 865. Trent Reznor’s ‘Copy of A’, from Nine Inch Nails’ Hesitation Marks [Columbia/Polydor]is a techno thriller of a song. The low end is almost infrasonic and the combo of the 865 with the Vandersteen Treo CT’s produced the most powerful, but tightly controlled low end I have experienced from my reference speakers. Turned up loud as this song deserves, it was as imposing as my home cinema system with the subwoofer working the room. It was astonishing as it was exceptionally well presented. At no time did I perceive the speakers running loose. The powerful bass was complimented by the specifically placed mid and high sonics. Their crisp tactical placement became more meaningful as they cut through the thundering bass. Once again, the 865 brought the house in a one box solution.

Providing clarity to the complex or subtle is another hallmark of a top-flight amp and pre-amp. Eiji Oue and the Minnesota Orchestra’s interpretation of Jean Sibelius’s ‘Lemminkåinen In Tuonela’, tone poem for orchestra (Lemminkåinen Suite No 2), Op. 22/2 [Reference Recordings] is both delicate and intricate. The use of single and double reed instruments creates a haunting effect amidst the strings. The image of the oboe represents a voice lost in the woods while the double viols presage danger all around. The violin’s cast a warning tone to the reeds as the oboe calls out as a lonely voice in the wilderness. The emotional conveyance is palpable as you sense the danger and the forlorn almost resigned call of the oboe. Orchestra positioning is complete and precise. The spacing between musicians is clear and defined. Massed instruments are conveyed with a coherence of singularity without the sacrifice of their individual contributions to the whole. Any integrated that can encompass the nuance and scope of a recording that can be both delicate and powerful in both delivery and emotion is a worthy audiophile choice. The 865 achieves these aims with an effortless joy.

Bringing these qualities to a silky mid-range centric recording like James Taylor’s October Road album’s first track ‘September Grass’ [Columbia], I can revel in the joy of simple acoustic guitar, bass, and drums in a small group setting. Recordings like this are the audio equivalent to that favourite pair of shoes. They feel right and I can spend hours in them. I want to settle in for the afternoon and let the stress of the day roll away. What I do not want is edge or grain. I do not want coloration. I am seeking that hard to find accurate timbre and have the music create the gestalt of memory triggering the daydream qualities of returning to the moment – good times made possible by the time machine of music. Few pieces of kit make this possible. The 865 is one that does with aplomb.

In the months I have had the 865 in house I have found no style of music where it did not acquit itself masterfully. The amp brings power, finesse, and musicality to every genre and from any quality source available. The 865 is versatile enough to play stand-alone pre-amp or integrate with a home cinema, or maybe it simply needs to be itself as the centrepiece of your no compromise two-channel rig. However you choose to insert it into your home and life it will do the job for years to come. That is what venerable things do! Highly recommended.

Distributed in the UK by: Padood Ltd