There are three versions of the W8. The standard, the SE and the SE + that I have been listening to. Bear in mind that this version costs about double the price of the standard model. The SE+ variant means that it has a number of internal upgrades that add considerably to the cost of the standard version. The electromechanical parallel resonators and the acoustic phase linearisation network sound very grand upgrades and I am reliably informed that the first comprises of a tuned cable of absolutely exactly defined length, connected to the positive speaker terminal to offer what sounds to me like a resonating tuning fork, perhaps there to counter any mechanical resonances present. The latter comprises a capacitor/resistor network which apparently bends the phase to endow the design with better imaging. Neither of these in-cabinet improvements are new to me. I have seen the first devices used outside the cabinet in a free-standing cable design and the internal phase correction is a widely employed device too. But the SE+ endowments go further. There are a pair of Steinmusic Speaker Match Signature devices, designed to eliminate EMF plus an improved Mundorf Silver Gold Oil capacitor on both, widebander and rear tweeter, which replaces the KZK white line version found in the standard W8. The widebander’s main cap is even bypassed by a Duelund tinned copper cap. Also, attached to the magnets of the aluminium-coned wideband drivers are a set of Harmonix RF 5700 Tuning Bases. The upgrades continue with Bybee Quantum Purifiers which are also present in the SE version, and two series 16-cm series resonators added to widebander and the 4” driver. Oh and the Swing Base comes as standard too. At this stage, let me say that, without a standard pair of W8’s for comparison, I have absolutely no way of commenting on these sonic upgrades. It’s a lengthy list, I asked the UK distributor to comment on the differences between the standard and SE+ versions and he said that they were “massive”. 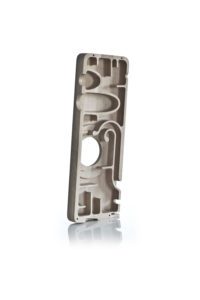 Each cabinet interior is a work of art although you’ll never see where most of the design beauty lies. They are formed from solid wood sections and not MDF or any of its ilk. Imagine the cabinet split vertically in two lengthwise and both sides being machined out in a complex labyrinth of enclosures including a loading for the side-mounted bass unit which curves through elegant radii, carefully designed to avoid any turbulence. It meets the outside world through a slot vent at the bottom of the rear of the cabinet. I doubt that there’s a single piece of superfluous cabinetry in that 15 litres of internal volume. You couldn’t achieve this with MDF and even with solid wood you would never arrive at something so exquisitely executed without recourse to a computer controlled CNC machine. This is where a lot of the extraordinary presentation of the W8 SE+ starts life. The individual loading and positioning of the drivers within this cabinet is really what the speaker is all about. Then the two mirror image sides of the cabinet – oak in the case of the review samples – are glued together and beautifully finished with subtly curved top and bottom edges. It is extremely elegant.

Before moving on I should describe the Swing Base set up. There is a slot cut at the bottom of each cabinet and a metal bar fitting slips into this and runs along the back edge. It’s a loose fit, but each bar terminates in circular pieces that are used to suspend the rear of the cabinet from two precise lengths of steel cable, terminated with a ferrule and hung inside two outriggers rather like a suspension bridge. Hooking each of these onto the cables decouples the rear of the cabinet from the floor while a ball bearing, sitting in its own cup nests into another cup submerged within the cabinet toward the front. When floated like this the whole cabinet sways around at the smallest touch. It’s an interesting solution to decoupling the cabinet though it doesn’t work as well on carpeted floor, but the company has its own ‘Carpet-Aid’ for this.

Siting the speakers begins with working out how much free air you can afford them. Initially and after a day’s listening in my usual and intuitive spots I found that they were too close to the wall and moved them halfway across the room toward a near-field position with the bass units facing out. I’ll spare you the details of the lengthy process as your own room will present you with enough challenges. I ended up with them about one-third the way across the room with the bass units facing inwards but after all this, I have to say that they sounded really interesting no matter where they were.