Audiovector is a company that gets a lot of coverage but still doesn’t get the recognition it deserves! I guess some of that is because there are still a lot of Danish speaker makers and some inevitably have more marketing power than others, but Audiovector remains on top of a lot of contemporary trends. A few years ago it introduced its Active Discreet range of loudspeakers with wireless connectivity and amplification provided by a ‘discreet’ black box that can be connected to a range of models. It was also one of the first dedicated two channel brands to introduce in/on-wall loudspeakers and OEM versions of these were included in Naim’s NaimNet multi-room systems back when that wing of the company was in business.

The QR series is the entry level range for Audiovector yet the speakers are built in Denmark at the company’s Nordhavn facility. The cabinets are sourced externally as is the case with almost all remotely affordable models today. The range consists of a stand-mount, centre channel, sub, and on-wall models alongside two floorstanders of which the QR5 is the largest and latest. The QR range feature a planar ribbon tweeter instead of the more common dome design – specifically an Air Motion Transformer model that has been dubbed Gold Leaf. There is a mesh in front of the driver that’s plated in rose gold and which is designed to work as an S-stop: a filter that controls sibilants. It is intended to work in the same way as the pop filters placed in front of microphones for singers in a studio. The tweeter sits in a machined aluminium faceplate that’s anodised in a tungsten titanium finish to contrast with the gold. It’s a very slick loudspeaker all round with post formed top corners and attractively branded aluminium trims around the mid and bass drivers. 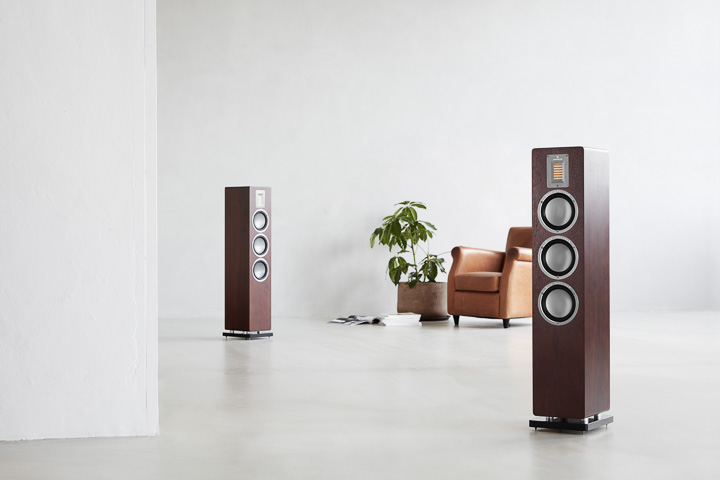 The latter are a new design for Audiovector with a sandwich cone construction that combines two layers of aluminium with a filling of damping material to minimise ringing, it’s an approach that we have seen used by a variety of manufacturers but this is one of the smaller brands to go to such lengths. The midrange and two bass drivers look identical; they are both six inch types with ‘Pure Piston’ cones but the differences are behind this slick façade. They have different voice coils, resonant frequencies, cone weight, frequency response, and sensitivity. Within the cabinet the midrange has its own sealed asymmetric enclosure to nullify standing waves. The mid takes care of frequencies above 300 Hz and hands over to the tweeter at 3kHz. The system as a whole has a higher than average sensitivity of 91dB, but that is for a four Ohm impedance; at the more commonly quoted eight Ohms that figure would be 3dB lower.

The cabinet initially appears to be sealed but look closer and it’s apparent that there is a reflex port, a slot in fact, underneath the box which is raised above a plinth. Unlike front or rear firing ports, this provides a relatively predictable environment for Audiovector’s engineers to work with when designing the speaker. The back panel is plain except for a large aluminium terminal plate that presumably supports the crossover on the inside. One pair of cable terminals are provided, which simplifies connection but does mean that bi-wring/-amping is not an option. The base plinth extends the QR5’s footprint to improve the stability of what is quite a tall metre plus high cabinet and comes fitted with nylon bolts to suit a polished floor; attractive stainless conical spikes are supplied in the box. Magnetic grilles are also supplied for those that want to cover up the metalwork.

The QR5 is a relaxed and refined loudspeaker; it has wide bandwidth and an easy delivery that’s the perfect antidote to all those bright and zingy little boxes. Refinement is a rare thing in audio and in the QR5 that sophisticated sound does good things for tonal richness; voices sound fabulous, maybe a little bit rich, but more in a satisfying way than blurring the subtleties of expression and phrasing. In particular, the tweeter is fabulously smooth and effortless, which means that nothing grates even with less sophisticated recordings, where some adroit added charm can be a real boon. The guitar on Ryley Walker’s Golden Sings That Have Been Sung[Dead Oceans] sounds fabulous; the tone is gorgeous and helps you to appreciate what’s so special about this artist. It also does nothing to undermine the emotional power of the music; the climax of ‘Sullen Mind’ has all the drama of a genuine travesty. It’s mildly irritating that compression stops this from making the dynamic impact that it must have live, but the QR5 manages to bring out the charm of this commercial recording without ruffling any feathers in the process. 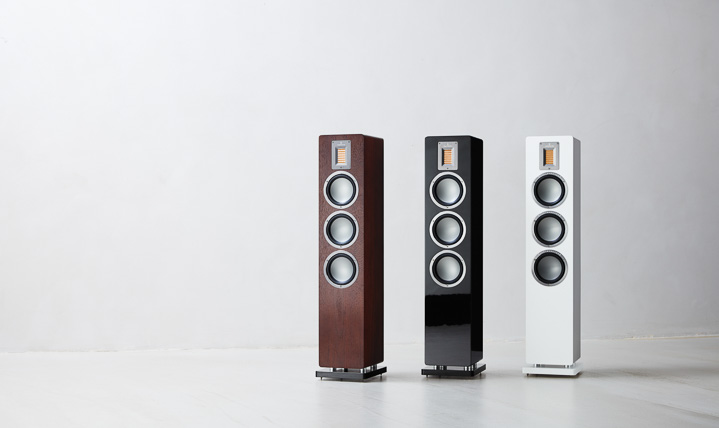 That initial experience was with the Arcam SA20 also reviewed this month (as it seems like a sensible system match, price wise). However, switching to my usual combo of Townshend Allegri Plus pre and ATC P2 power amp brought an increase in vibrancy and scale, with rather nice image depth to boot. This brought more life to the mid and treble and increased bass weight, proving that the QR5 has a lot to offer and is as much a slave to its partnering equipment as any decent loudspeaker. Under these circumstances it projected well into the room and delivered good dynamics. There is no substitute for power if you want to bring a piece of music to life and sensitivity is a key part of the equation. It’s why you get a big difference in level between albums with these speakers and some truly grumbly lows, especially when playing Raime’s ‘Coax’ [Tooth, Blackest Ever Black], a particularly deep and dark recording that often gets uncomfortable with smaller speakers, but retained its clean menace with the QR5.

The treble is also unusually clean. Ribbons usually sound sweeter than the domes found on most speakers and this is no exception. It lets you revel in the nuances that make certain artists and recordings more engaging than others. It can also cope with complex pieces of music without ever sounding mechanical thanks to the absence of the usual break up modes. Its timing is on the majestic side, however; the bass doesn’t stop and start with the quicksilver speed you need to get a strong sense of immediacy. This is not critical with all types of music but does lend anything percussive a realism that’s exciting. However, the piano playing of Patricia Barber on ‘Subway Station #5’ [A Distortion Of Love, Antilles] does ripple with a watery magic that’s quite beguiling. Also, while this characteristic is intrinsic to the loudspeaker, it can be strongly attenuated by careful source and amp selection. Pick a system that accents the beauty of sound rather than its energy and the Audiovector QR5 will react accordingly.

It’s one of those speakers that lets you relax with the music and that’s clearly not a bad thing, I like the way that it is pretty well unflappable even at higher levels and that the bass is so fulsome. This could overawe smaller rooms but with only about 40cm behind them the balance was very even in my medium sized space. I tried a track that is notorious for its sibilants, another Patricia Barber number called ‘A Touch of Trash’ [Modern Cool, Premonition]. On this the vocals did seem a little cleaner than usual, the emphasis on S sounds didn’t disappear, but they were reduced enough to stop it being a distraction. Lou Reed’s classic ‘Walk on the Wild Side’ [Transformer, RCA Victor] sounded appealingly open and his voice projected well over the fabulous tone of the double bass. It lacked a little of its edge perhaps, but none of its innate charm. Another bass heavy track, Hadouk Trio’s ‘Vol De Nuit’ [Live à FIP, Mélodie], showed how well the Audiovector can produce deep clean lows while giving the ‘voice’ in the piece, an oud, the space to express itself in a clear fashion. 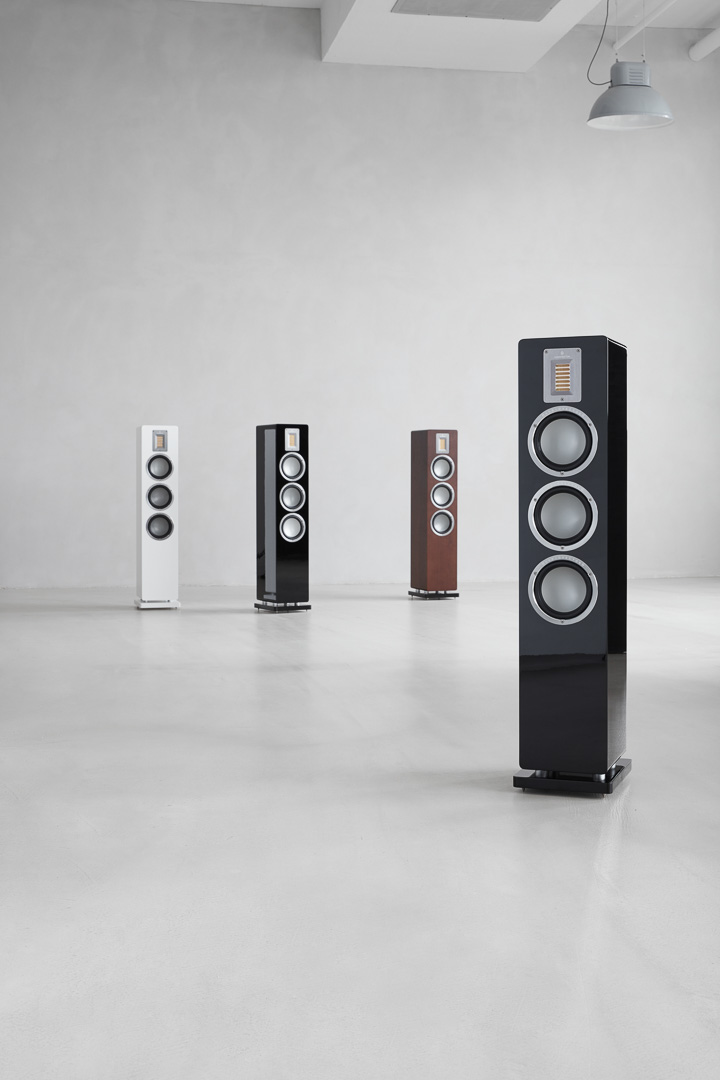 The Audiovector QR5 is a lot of well finished loudspeaker for the money with a relatively relaxed demeanour, clean leading edges, and strong bass. And while those who are after maximum thrill power might get those thrills elsewhere, anyone looking for a speaker that lets you enjoy the music for hours on end without having to try will find them very appealing. You can also see why there are centre, sub, and surround channels in the QR range; it’s clearly able to cope with the dynamics of home theatre sound with ease, and there’s a lot to be said for that.