Note: this is the first of a two-part review, concentrating on the DAC in its home audio capacity. The second part – as a headphone DAC/amp in its own right – will be published in an upcoming issue of the magazine.

It’s hard to believe, but the original Dragonfly DAC from AudioQuest first hit the streets back in 2012. It eventually morphed into two models in 2016 – the entry-level Dragonfly Black and the more up-scale Dragonfly Red. Now, they are joined by the Cobalt; as the name suggests a vibrant blue USB converter, designed for a wealth of uses. This does not replace the existing models; it sits above them. In essence, you could think of it as what happens when the Dragonfly meets 2019’s technology.

The DAC part of the DAC itself is the latest ESS ES9038Q2M (for ‘mobile’) chip, fed by a Microchip PIC32MX274 USB receiver chip, with the company’s monoClock ultra-low-jitter clock, StreamLength asynchronous USB, and also sports elements of AudioQuest’s own jitter-busting Jitterbug, all in something that looks an elegant USB storage key. The two named chips mean a third more processing speed overall, meaning a better sound from an even smaller form factor. The filter is now ‘slow-roll-off minimum phase’ (previous iterations were fast roll-off only). There is no way to change this or any other function of the Dragonfly from the case; in fact, the only indication is the change in light of the Dragonfly on its top.

Although it comes with a USB 3.0 ‘Dragontail’, AudioQuest wanted maximum backwards compatibility, which means it works under USB 1.0 standards with ease. The advantage to this is ‘no damn drivers’ and it means it works with practically everything that ever sported a USB output. The downside is as it comes, like the Red and Black before it, hi-res is limited to 24-bit, 96kHz PCM. It will support higher rate MQA files, however.

This is where the spec-readers and the real-worlders differ. The former will look at those specs and dismiss the Cobalt as just another Dragonfly with a new DAC. Some may gracelessly add the Jitterbug circuitry as a sop to change but see this in a very narrow light. In fact, it shares almost nothing with its older but smaller brothers.

In the home, in the majority of cases, the Dragonfly Cobalt is going to hang off the end of a USB output of a computer (the exception is something like the Stack Audio Link, of course, and that is worthy of note in and of itself), with a mini-jack to two-RCA phono cable on the other end of the little blue box. This also means the whole 64-bit bit-perfect volume control ends up being ‘dimed’ and ignored in a system context.

What Cobalt does is a lot of what the two cheaper Dragonflies do, but more so and better. It’s an inherently dynamic, powerful sound, full of energy… but not over-exuberant, as can be the case with the Black and to a lesser extent the Red.

Let’s talk numbers, specifically the 24/96 ceiling. The MQA work-around (and potential third-party software fixes) aside, this will elicit one of two results; either an absence of caring about such things (common in those who have a portfolio of ripped CDs) and ‘deal-breaker’. Both are entirely understandable positions, but there’s also a third position of active interest in sound and potential disinterest in higher-resolution sound. In fairness, I’m pragmatically closer to that middle ground than I should admit to, but I’d also argue that if my DSD collection was suddenly rendered unplayable, that would amount to hundreds of hours of music… and perhaps three hours of music I might actually miss. I can’t help but think I would rather have a fine-sounding 24/96 DAC than a mediocre-sounding DAC that plays to high-grade DSD, and in essence, that’s precisely what you get with the AudioQuest Cobalt.

It is exceptionally clean and detailed sounding, building heavily on the already clean and detailed Red. If the Black opened the window, and the Red cleaned the window, then the Cobalt builds a bigger window and brings industrial window-cleaning products to the window-cleaning party. There’s also surprisingly good stereo presentation, with good depth and height when played through the right system, and very good image solidity. While the difference between the Cobalt and desktop DACs is easy to hear in direct comparison, as a standalone, it never once announces to the world that you are listening through a USB DAC and just sounds like a damn good DAC, which is fairly potent stuff.

There’s one potential torture test that the Dragonfly Cobalt sails through; the ‘compare it to a Mojo’ test. Although the Mojo is on balance the better option (especially when it comes to high-resolution of course), what’s surprising is just how close the Cobalt gets, even outclassing the Mojo when it comes to the ‘kick back and listen some’ moments. The Mojo is more detailed, but the Cobalt is the more musically alluring and natural sounding. Perhaps what’s so good about the Cobalt is that there is so little in it between this and the Mojo. Batteries, a set of controls, and a much bigger form factor all add to the Mojo proposition, too, it must be said. On balance though, this wasn’t an uneven fight, the two were well matched and trading blows. I’ve used the Mojo a lot in travelling, but I have to say I’m ‘excessively diverted’ by the Cobalt. 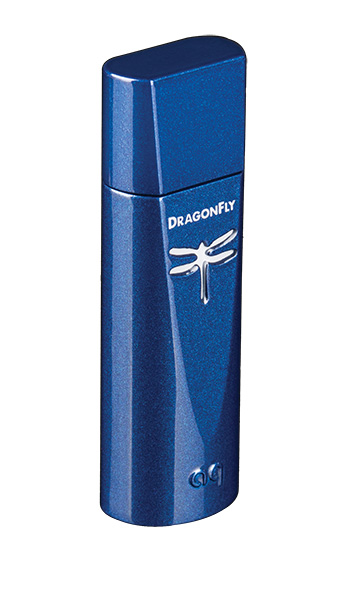 But that portability angle is not the focus of this review and it highlights a spoiler alert; you’ll need to read the Stack Audio Link review in tandem with this one to hear how it sounds best in a domestic setting; while it’s very good as the ‘DAC’ in the Mac+DAC sandwich, hearing what it can do on the end of a dedicated streamer that plays to the Cobalt’s strengths is excellent. In a way, the two are better than the sum of the (admittedly very good) parts, and the two combined really do, ahem, stack up (this won’t be the last time you hear that quip).

In a way, the hi-res issue is more of a question when used in this context (if it’s your only DAC, then you may find the lack of DSD and native support for files beyond the DragonFly’s 24/96 ceiling more of a limitation in the home than you might while travelling with it). It’s also perhaps an indicator of just how little we actually need higher-resolution formats. A good 16/44 file ripped from a CD played through the Cobalt sounds really good indeed, although comparisons with MQA show up the more temporally-tighter sound of that format. In the same way that I never felt I was listening to a DAC that had been compromised by a lack of power supply (or PCB real estate), I never felt the loss of those more hi-res files. I did compare a couple of tracks between the Chord Mojo and DragonFly Cobalt, and this allowed me to both compare like with like in format terms and how higher resolution files compare with their 16/44 equivalents. This was interesting because in almost every case on PCM, I felt the difference between the two DACs was greater than the difference in formats (DSD was different, and there was a step forward in performance).

The two DACs are different in character, with the Mojo going for a fuller and more satisfying performance with a little more definition in the bass, the Cobalt going for the faster and more fun. On balance, the Mojo was the better performer, but not by a large margin. If this was to be my only DAC for desktop and portable use, I’d go with the Mojo. But, if I had the choice of a bigger, better desktop device and a portable… the jury is still out on that one. And using them hanging out the back of the Stack, I’d go with the Cobalt. That one really is something special. That’s ‘inviting your audio buddies around and playing them something that knocks ‘em dead and costs less than their power cords’ special.

In a way, this review is one of upholding the status quo. The Red is better than the Black, the Cobalt is better than the Red. However, in a way it’s also nothing of the sort; what the Cobalt does push ahead of the Red and the Black by a considerable margin. It doesn’t make the Red sound ‘broken’ because the Red (and the Black) are excellent performers in their own right, but if you can go from Red to Cobalt, do so. And then there’s the Stack Audio Link, which turns this into a giant-killer on the main stage.

If you have a demonstration of two or more DragonFlys (DragonFlies?), it takes longer to swap the DACs over than it does to hear the benefits of the Cobalt. Whenever there are three products in a line, there’s a temptation to class them, “good, better, best!” but in this case, it’s, “good, better, bloody hell!”