Audiobyte is the best digital audio company you’ve never heard of. In fact, Audiobyte is a subsidiary of Romanian digital experts Rockna Electronics and if you follow the digital audio world closely, you’ll definitely know that name as both the brand in its own right and the products produced by its clever design team.

Audiobyte’s current Hydra line comprises Hydra.VOX DAC with headphone amplifier and its supplied Hydra.ZAP power supply. The keen-eyed might spot two sets of power feed outputs from the Hydra.ZAP; a matching Hydra.HUB digital transport was in final development at the time of the review and is expected to cost less than £2,000. There is also a control app already available on Google play, but us i-Users will have to wait. 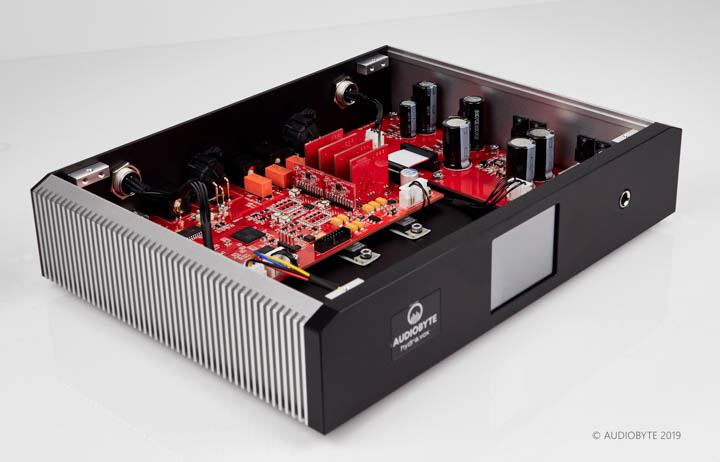 Both units sit side-by-side or on top of one another with a near-identical three-quarter sized case with an informative colour touch screen in the centre. These allow you to drill down deep into the options of both devices, enabling you to do anything from fine-tuning the voltage. It uses a supercapacitor array to feed the ±5V for the digital side of the system while the 8V reference voltage and the main analogue stage (which can be set anywhere from ±16.5V to ±19.5V, is optimised at 18V and I liked it best at 19.1V) are well regulated. The array does take some considerable time to charge, but both the display and a drop in noise from the power supply (moving from ‘near-silent’ to ‘silent’) tell you when the array is fully charged. A little green light tells you whether ‘Vox’ or ‘Hub’ are connected, and you should only connect or disconnect the devices from the Hydra.ZAP when it is in standby. One point not made clear in the manual is the connection is not completed until the supercapacitor is fully charged, and that means the first hour or so waiting for the caps to saturate could result in frantic ‘it’s not working!’ calls to the manufacturer or distributor, especially as the first reaction here would be to put the DAC into standby, which stops the capacitor charging process. The DAC takes some time to run-in, too; the sound you get immediately after that first hour and the sound you get a few dozen hours later is quite different; the scale and refinement are there from the outset, but the harmonic structure to the sound and the way it puts music together in an extremely organic manner takes some time to appear.

The Hydra.VOX is fed by the Hydra.ZAP using two umbilical cables; one five-way cable feeding the digital audio circuitry and an eight-way cord for the analogue power supplies and the reference voltages. When connected, there’s a dim Audiobyte logo on the front panel in standby, but on powering up, the panel is just as informative as the power supply, and you might want to deep dive into the menu to set up PCM and DSD in the best possible settings for your tastes and system. You can adjust filter settings for both types of file (or run DSD in direct mode), you can defeat the headphone socket and run the DAC at full level and enable/disable the autodetect for the headphone socket. If you use the level control, there are up and down controls in pale blue at the bottom of the touch-screen. While discussing the screens, remember when powering the DAC up or down, you do so from the power supply, not the DAC (like an idiot, I spent several minutes mashing the front panel of the DAC looking for the standby button).

The meaty part in the Audiobyte is two-fold. First, it’s one of the handful of modern devices that includes I2S connections through HDMI. If you think I2S was just a digital flash in the pan from the 1990s, remember that it’s basically the native tongue of digital audio, avoiding any kind of transcoding necessary to package digital for transit from device to device. Done properly, I2S rips out several stages between codec and ear, and if you have the devices that can connect this way – Audiobyte and Rockna, for example – this is the must-do way to connect.

Next, the architecture is developed in house and fed as firmware to a Xilinx 7-series Field Programmable Gate Array. This is not dissimilar to Chord Electronics programming its own DACs into FPGA chips instead of using custom or off-the-shelf DACs. It means the one-bit DAC and signal processing are all unique to Audiobyte and – even though the DAC currently has a sampling rate close to DSD512, if more is needed, more can be provided through firmware updates. This also means the DAC is capable of some very heavy lifting; Using 80 DSP cores running at 200 MHz and 68-bit processing, the Hydra.VOX has internal audio file capacity of up to 35-bit, 768kHz rates. Also, a unique feature of the Hydra.VOX is the seamless integration between analogue and digital filters in order to preserve accurate phase of the audio signal. The digital filters inside FPGA are programmed to exhibit a “mirrored” phase response, thus cancelling the phase error from the analogue domain, creating a very accurate phase response over the audio band.

There’s a ‘category error’ that is easy to fall into with regard to the Hydra.VOX/ZAP combination. Because they are three-quarter sized and come with a headphone socket, you naturally pigeon-hole them in ‘personal audio’. Don’t. While the pairing represents an excellent headphone amp and DAC system in their own right (although in that context, the absence of balanced headphone outputs might sway against them), they are also so much more than that. In fact, it was in a conventional audio context that they really show what they are capable of, and as a first-rate DAC, they are in the top tier. The sound can perhaps best be summed up as ‘organic’ and ‘fluid’. It’s a very dynamic and detailed presentation but that coherence across the frequency range is what first jumps out at you. 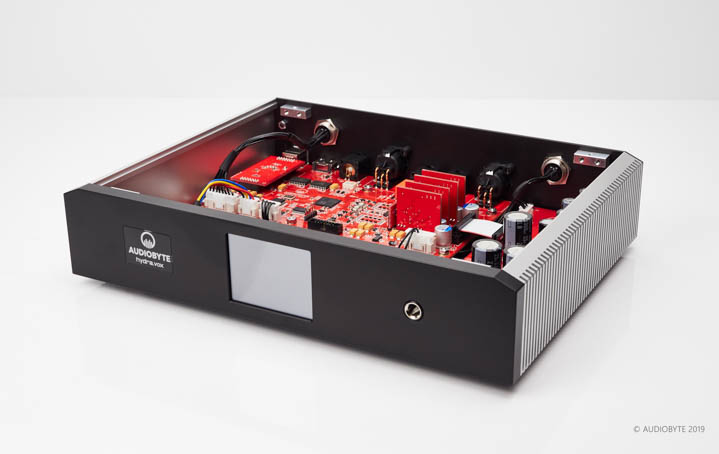 A solo piano can be a surprising torture test for a DAC, because it’s such a known and pure sound, even the mildest digital hash quickly turns a Steinway into a Segway. The ‘La Campanella’ from that audiophile classic Nojima plays Liszt [Reference Recordings] is a fine example of just how easy it is for good digital to shine over expensive-yet-mediocre digital audio; here the upper registers are played with precision and clear delineation… and none of the raspy grittiness that many systems portray as ‘high-frequency information’. There’s a lot of good frequency extension and the notes are easy to hear and pick out, but that ‘digital’ sound is gone.

The clarity of piano is swiftly joined by the sheer scale of the soundstage. The Hydra.VOX/ZAP create a wide and deep soundstage with some – rare in the digital domain – stage height. For this, some of those classic Decca SXL recordings turned digital – with, admittedly mixed success – are useful. My oft-played overture to The Pirates of Penzance by the D’Oyly Carte company from the early 1960s is a textbook test that the Hydra.VOX aces. If it makes my Wilson Duette Series 2 produce an even wider stage than usual, that’s a very good sign.

Other noted torture tests for digital – large scale orchestral, solo voice – came and went without a problem, and they were swiftly replaced by music that wasn’t just played to challenge the system, but for sheer enjoyment. There’s a bit of a left-brain/right-brain dichotomy in audio, and the Audiobyte Hydra.VOX/ZAP is so good because it’s one of those rare products that provides succour to both sides of the cerebellum equally. It has the analysis and detail of the DACs that focus on the numbers and technical specifications, and yet it has the deftness of touch and the wideness of soundstage found in valve equipment. 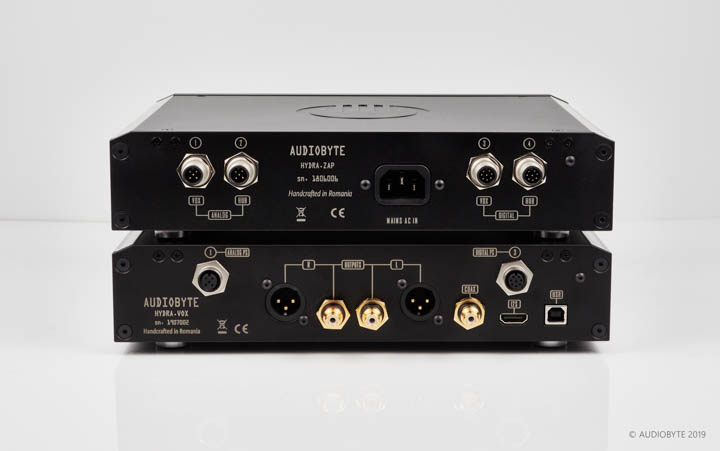 On their own, the Audiobyte Hydra.VOX and Hydra.ZAP make a cogent, refined and detailed sounding DAC that doesn’t do that hashy-shouty impressiveness that often passes for ‘high-end digital’… and I suspect that ‘best digital audio company you’ve never heard of’ title goes away very fast when the two-box Hydra is joined by the Hydra.HUB. If you are upgrading a CD player or streaming from a PC today, the Audiobyte system deserves a heavy listen. If you have a device with I2S output, this is a must-hear option.