The headphone world thought the sky was falling when Apple decided to can – pun intended – the headphone socket. While there were still ways to use a wired headphone, pretty much on that day, a lot of the world waved goodbye to wires in their portable audio, and never looked back. In fairness, what also happened was a number of companies upped their game and released high-performance wireless personal audio products. 1MORE’s True Wireless ANC in-ear ‘headphones’ – the first True Wireless design to receive THX approval – are a great example of how far this technology has progressed.

The 1MORE True Wireless ANC do a heck of a lot. They feature the tried-and-trusted hybrid dual-driver design (that uses both a balanced armature and 10mm dynamic driver), which has been a staple of 1MORE’s in-ear monitor designs. They also use the high-quality, latest and most expensive iteration of Qualcomm True Wireless processing (this sends a signal simultaneously to left and right channels, as opposed to the higher latency from earlier iterations that fed both channels to the right ear-bud, which then sent a second signal to the left ear-bud). This gives them a 10m range. The 1MORE True Wireless ANCs also support aptX and AAC high-quality Bluetooth audio (and if anyone still thinks ‘high-quality’ and ‘Bluetooth’ are mutually exclusive… please stop replaying 2017 over and over again; we’ve moved on). As the name suggests, the 1MORE True Wireless ANCs feature an active noise cancelling circuit, and the clever part in this is they use two microphones per channel; one to read and cancel external (environmental) sounds, the other to reduce resonance in the ear canal itself. ANC has four basic settings; Strong, Mild, Pass-Through and Off. 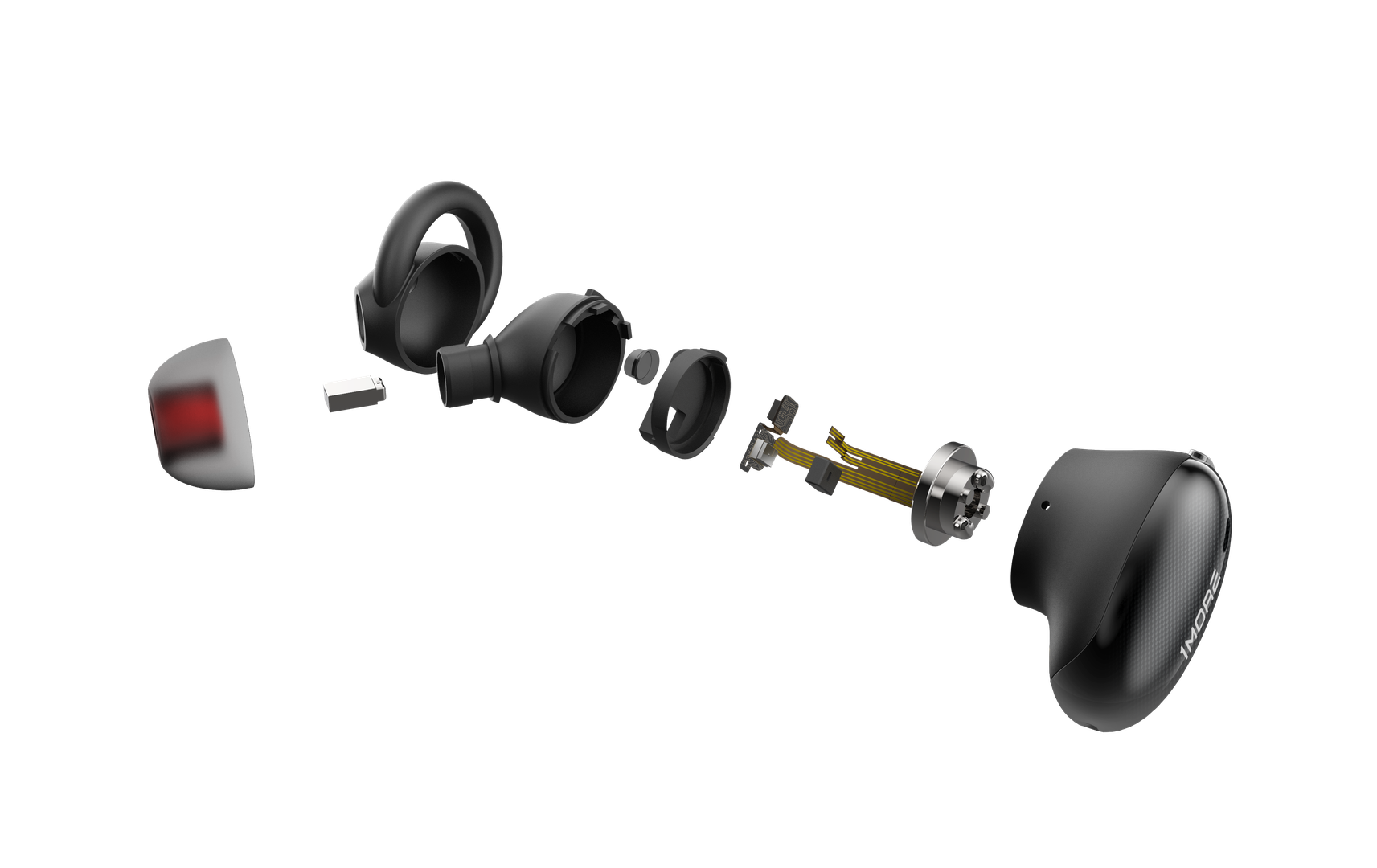 As with most True Wireless designs, operation is through touching the shell of the headphone/earphone rather than pressing some hard buttons. Of course, different combinations of pressing and wiping denote different functions and unless you spend the first day or so walking around with the manual as some kind of decoder ring, you’ll invariably mash the wrong combination and end up trying to raise the volume by turning off the noise cancellation. A few hours use soon puts you right, and at least when you are on the first knee of the learning curve, the pre-recorded voice that tells you what listening mode you are using is more of a whisper than a shout. You can also control this setting through 1More’s own app.

Naturally, with all that going on, the battery life takes a bit of a hit. 1More claims up to six hours of battery life in the unit itself, and up to 22 hours of juice when you factor in the charging case battery. The two take one and two hours respectively to charge. I think these figures are a little enthusiastic (a more real-world setting playing music through Bluetooth with ANC switched on might get you somewhere under four hours of play before the in-ear batteries are depleted).

Ear fit is crucial here, and 1MORE do provide a lot of permutations of ear tip (two sets of three silicone tips and three ear grips) to make sure the True Wireless ANC fits your ear snug enough to not bounce around when you do. Get it wrong and the 1MORE True Wireless ANC deliver a lacklustre sound and even the noise cancelling seems to suffer. Moreover, the right ear tip selection is more complicated than many units because when it’s ‘almost’ right you barely notice the gradual turning motion of the unit as it gradually corkscrews its way out of your ear. Once again, this is a function of packing a lot of tech into a small space, and it means that the 1MORE designs do sit slightly proud of your ears, looking a bit like a more organically-crafted version of those ‘hands-free’ Bluetooth phone ear-buds of a few years ago. 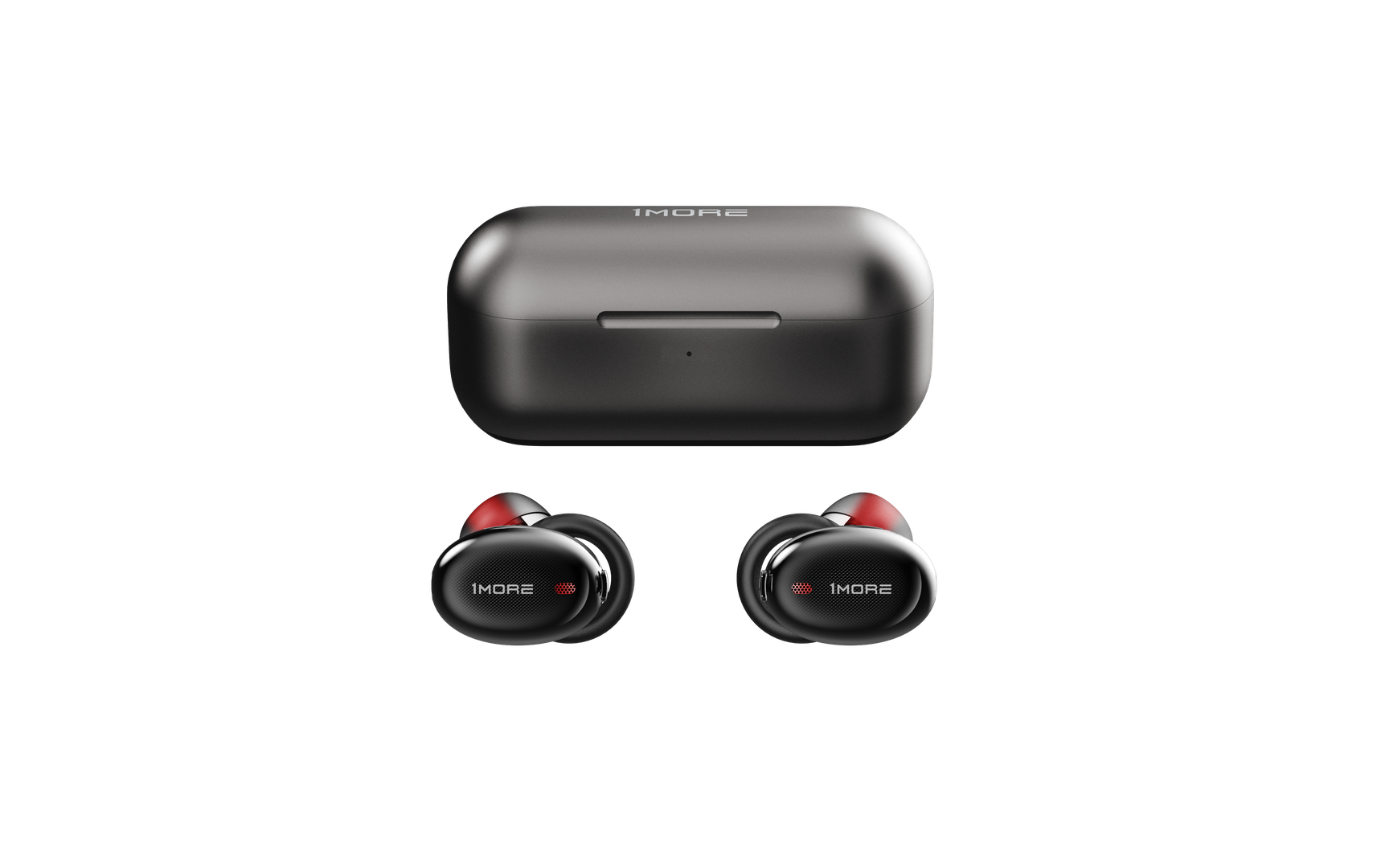 Get the ear-fit right, though, and the performance is very good indeed. The True Wireless ANC is very much in the ‘mainstream’ and ‘travel’ end of the performance spectrum as the sound quality has a bit of a scooped mid-range; there’s lots of bass, plenty of treble, with a slight dip in the middle. But, as many seasoned travellers (those were the days) will tell you, that kind of tonal balance is perfect for listening on the move, aided by a noise cancellation system that’s extremely good at filtering mid and high frequencies.

To fine tune the sound of the True Wireless ANC, 1MORE called upon the services of Grammy-winning sound engineer Luca Bignadi, and it shows, especially when the ANC system is turned on. At which point the earphones are at their most balanced-sounding and expressive, with a more lucid midrange alongside the clean and exciting treble and the powerful bass.

The make or break nature of ear fit aside, the only big downside to these in-ear headphones is they remind me of a time when active noise cancelling was a necessary part of travel. In other words, they remind me of ‘travel’. One thing’s sure… when all this unpleasantness is done with, the good quality of the noise cancellation in the 1MORE True Wireless design coupled with their light weight, good sound and excellent battery life (with the charging case) means these make a great travel companion. As it is, they work well on for the walking commute around the house although they are not ideal for runners.

As with anything in the personal/portable audio ‘space’, 1MORE’s True Wireless ANC designs face some very stiff competition from above and below, from some of the biggest names in consumer electronics and from no-name brands that spring up and disappear in an afternoon. Nevertheless, within that bear-pit of competition, the True Wireless ANC more than hold their own. Which is perhaps why it’s taken us so long to get a hold of a set… they sell out almost as soon as they hit the stores. Even in a time when travel was at its lowest point in a century, the 1MORE True Wireless ANC’s abilities as one of the best travel audio systems around were clear. If you dislike the ubiquity of Apple’s buds and want something both distinctive and with good performance, 1MORE might be the True Wireless choice.