The setting: The CanJam tent at the Rocky Mountain Audio Fest 2016.

“Have you heard Audeze’s new planar magnetic headphones?” blurted an excited friend and colleague from Head-Fi. “They’re in-ears, if you can believe that!” In order to understand my colleague’s self-evident wonderment, it helps to know that Audeze built its entire reputation by building high-performance, full-size planar magnetic headphones. First came the premium-priced LCD-series models, then the mid‑priced EL-8 models, and finally the affordable Sine-series headphones—all of them full-size models. What no one saw coming was a family of compact, full-range planar magnetic universal-fit earphones.

Full of curiosity, I headed straight over to the Audeze demo station where I discovered the firm’s all-new iSINE-series planar magnetic earphones, which looked and sounded very distinctive indeed. There are three models in the iSINE range: the virtual-reality system-orientated iSINEVR ($399), the iSINE10 (£349), and the top-of-the-range iSINE20 (£549), which is the subject of this review. Interestingly, both the iSINE10 and iSINE20 earphones can be ordered either with standard signal cables or in special bundles that also include the Audeze’s iPod/iPhone/iPad-compatible CIPHER cable with a compact, built-in DAC/amp/DSP module (for a £50 upcharge). Our review sample iSINE20 included the CIPHER cable, whose benefits we will discuss in a moment.

Relative to traditional universal-fit earphones, the iSINE20 looks unconventional and is worn in a somewhat unorthodox way. The iSINE20 earpiece enclosures are fairly large (too large to fit within the outer ear), comparatively thin, and shaped like skewed hexagons whose outer surfaces are lightly dished and covered with outward facing, mesh-covered vents. Almost everyone who has seen the iSINE earpieces has commented that they bear a striking resemblance to the wings of the Imperial TIE fighters seen in Star Wars films, only in miniature. You can almost picture a big, dark set of full-size Audeze headphones saying to the little iSINE20, “I am your father, iSINE. Search your sound signature; you know it to be true.”

As I mentioned above the iSINE20 does not fit within the wearer’s outer ears, but rather is worn alongside the ears, with mesh vents facing outwards, and with rear-mounted, tapered sound outlet tubes facing inwards and extending into the wearer’s ear canals. The earpieces are very light (about 11g per side, without cables) and are designed to be held in position either by sets of plastic ear hooks or by in-ear ‘earlocks’—both of which ship with the iSINEs. From the wearer’s point of view the sensation is that the iSINEs are ‘floating’ in close proximity to one’s ears, but with light-fitting and comfortable sound outlet tubes directing music into the ear canals. The sound outlet tubes are fitted with silicone ear tips as with conventional earphones, but the ‘feel’ of the iSINE20 is considerably different—with a noticeably lighter fit and lower backpressure within the ear canals. 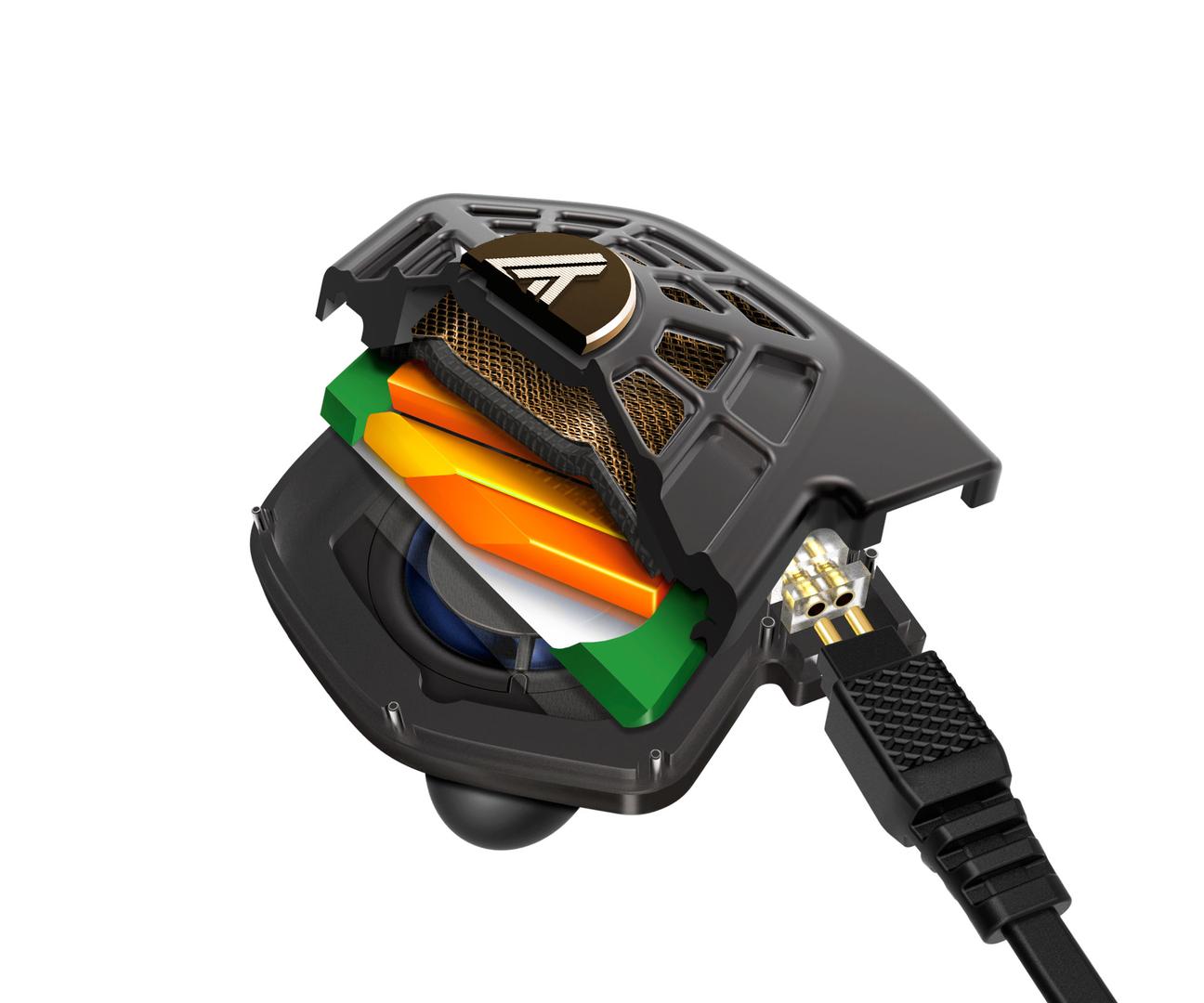 Unlike any other earphones of which I am aware, the iSINE20 uses a true semi-open back design (hence the outward-facing mesh-covered earpiece openings). Presumably this design touch reduces backpressure on the driver diaphragms and promotes a more transparent, uncompressed, and free-flowing sound. Another major goal of the driver design was to achieve unprecedentedly low distortion, which Audeze specifies at < 0.1% THD @ 100dB, which is very low indeed.

The iSINE20 ships with an extensive set of accessories including six pairs of silicone ear tips (in sizes S, M, and L), three pairs of ear hooks, two pairs of ‘earlocks’, a cleaning tool, a garment clip, a padded earpiece storage tray, a carry pouch, a ‘Certificate of Authenticity’, and a USB memory stick containing the User Guide and Warranty. Also included are two detachable 1.5m signal cables: a standard cable fitted with a 3.5mm mini-plug, and an iPod/iPhone/iPad-compatible CIPHER cable terminated with a Lightning-type plug).

The CIPHER cable is a significant component in its own right: it incorporates an iDevice-compatible, three-button remote/mic module plus a built-in Lightning–powered 24-bit/48kHz DAC and headphone amp complete with an integrated DSP engine. Importantly, the DSP engine applies Audeze-developed voicing correction curves that help give the iSINE20 a subtly more full-bodied, weighty, and well-rounded sound. Better still the CIPHER cable interacts with a free Audeze app that provides a cool 10-band graphic equalizer and two user-configurable pre-sets, thus allowing owners to fine-tune the iSINE20’s voicing as they wish. One neat feature of the CIPHER cable is that it retains the most recent EQ settings it has been given through the Audeze app—even when the earphones and CIPHER cable are transferred from one iDevice to another.

How does the iSINE20 sound? I found, as did every guest listener I polled, that the iSINE20 doesn’t sound like a traditional universal-fit earphone at all, largely because it conveys much the same sort of wide-open, spacious, airy, and transparent sound one might expect from a top-shelf, full-size, open-back planar magnetic headphone. In short, the iSINE20 sounds much like Audeze’s upper-tier headphones do, but in a smaller, lighter, more comfortable, and far more affordable package.

If you run the iSINE20 earphones as passive devices powered by a high quality amp/DAC (e.g., the superb Chord Hugo 2), you’ll find the earphones offer excellent resolution and definition, lightning fast transient speeds, and a somewhat midrange-forward sound. Top-end extension and articulacy are very good, while bass extension and pitch definition are also very fine. The catch, however, is that the bass is perhaps a little too lightly weighted relative to the more prominent mids, while the upper midrange and highs show just a hint of sonic ‘dryness’. 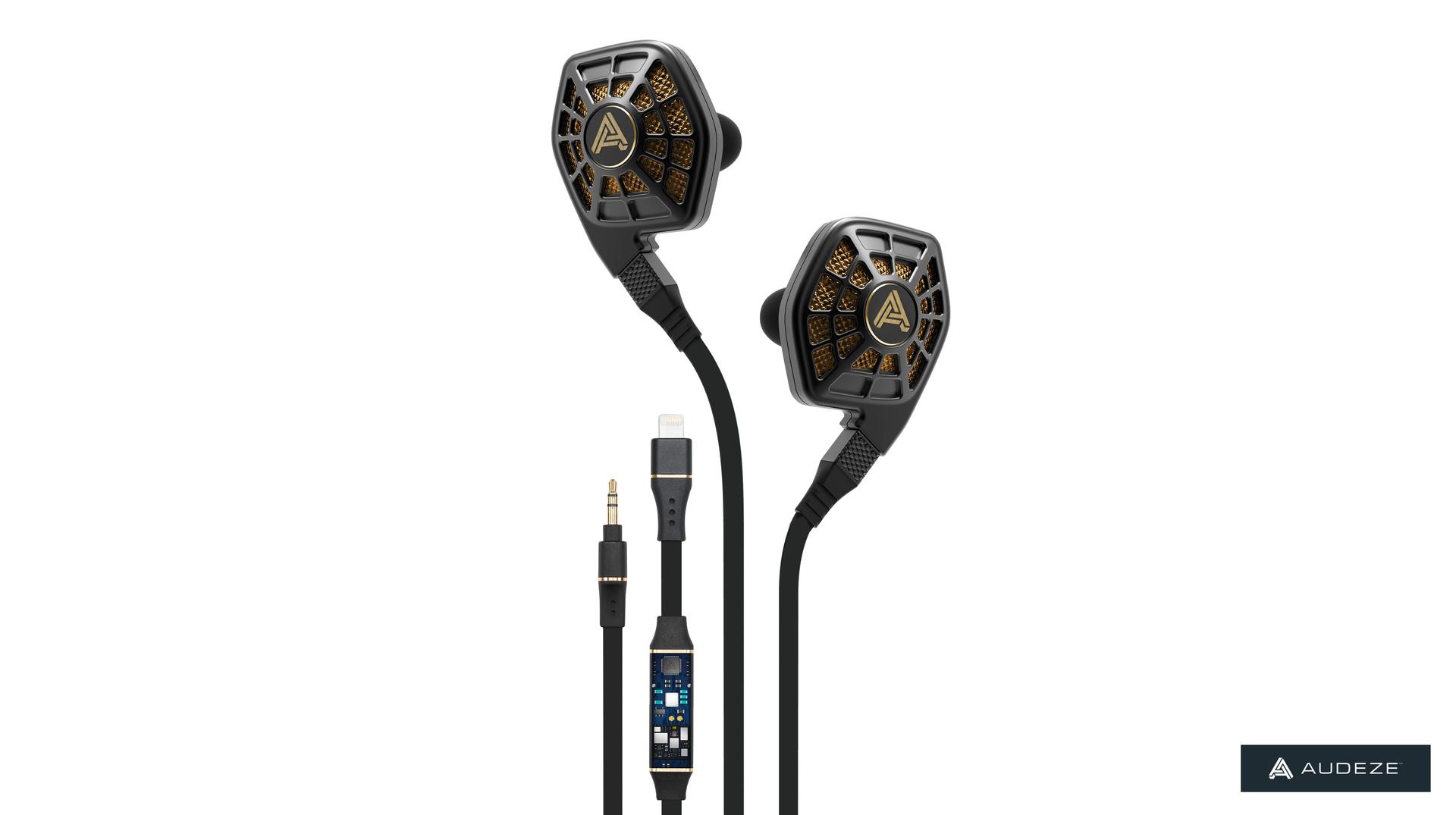 Ah, but run the iSINE20 earphones from an iDevice with the CIPHER cable in play and the earphone’s voicing changes—in subtle but pervasive ways—for the better. Although the self-powered CIPHER cable cannot deliver the sort of unearthly clarity and low-level detail of a premium amp/DAC like the Chord Hugo 2, the CIPHER nevertheless brings compelling benefits of its own. Among those benefits are a subtle but very welcome touch of additional bass weight and warmth, a gentle re-balancing of the iSINE20’s voicing to help the earphone sound more neutral and less midrange centric (yet without suppressing the naturally vibrant quality of the iSINE20 mids), and very subtle adjustments that help the upper mids and highs sound a little more liquid and a little less dry. With the CIPHER cable in play, the net effect is of hearing the iSINE20 perfected with voicing that is more than a little reminiscent of Audeze’s well-loved LCD-3 headphones. Given that the LCD-3 is many people’s best headphone ever produced and the disparity between it and these earphones in terms of price, size, price, weight, price, portability, and price again, it’s clear that the iSINE20 and CIPHER cable is capable of setting a new standard in earphone replay.

A track that beautifully highlights the iSINE20’s sonic strengths is Bebe’s ‘Animales Hambrientos’ from Cambio De Piel [WM Spain, 16/44.1], which juxtaposes Bebe’s wistful and breathy voice against an accompaniment consisting of an intricate mix of acoustic percussion instruments, piano, and elaborate synth textures and effects.

Many earphones would have a difficult time delineating the track’s multiple layers, but the iSINE20 makes child’s play of them, serving up each instrument and synth effect with superb clarity and full, rich tonal colours. On percussion transients, in particular, the iSINE20 captures the leading and trailing edges of notes just about perfectly. But the centrepiece of the iSINE20’s presentation is the haunting sound of Bebe’s voice, which weaves its way up, down, around, and through the mix drawing the listener deeper and deeper into the track. This is the sort of performance you might expect from a top-tier headphone, but it is rare thing indeed to hear from a mid-priced earphone with a self-powered amp/DAC/DSP cable selling for a tick under £600.

Audeze’s iSINE20 is a great mid-priced earphone and one that’s capable of redefining our expectations for what products of this type and price can do. For best results, try the iSINE20 with its associated CIPHER cable for iDevices and prepare to be amazed. Very highly recommended!

Sensitivity: Not specified, but maximum SPL is rated at >120 dB while maximum power handling is rated at 3 Watts

Weight: 11g per side, cables not included

DAC capabilities: Decodes PCM files at up to 24-bits/48kHz

Price: £50 upcharge when bundled with the iSINE20