Sennheiser’s Ambeo Smart Headset is an Apple Lightning powered, App-augmented earphone with microphones at the ears for noise cancellation… or binaural recordings without the need for a dummy head. The former is commonplace, but the latter is unique, and truly outstanding.

The earphone is a single driver design, the size of which is not specified. It’s sonically on a par with a pair of Sennheiser’s sub-$100 earphones, which means good mid-band and high-frequency clarity and detail, but with a light touch to the bass. There are three sets of tips supplied and a good seal makes a big difference to bass performance. The Ambeo Smarts are fitted with permanently-attached earhooks that are bendy enough to be comfortable and ensure a consistent fit, but not rigid enough for sport use. Its right channel cable comes with a small in-line mono microphone for phone use. 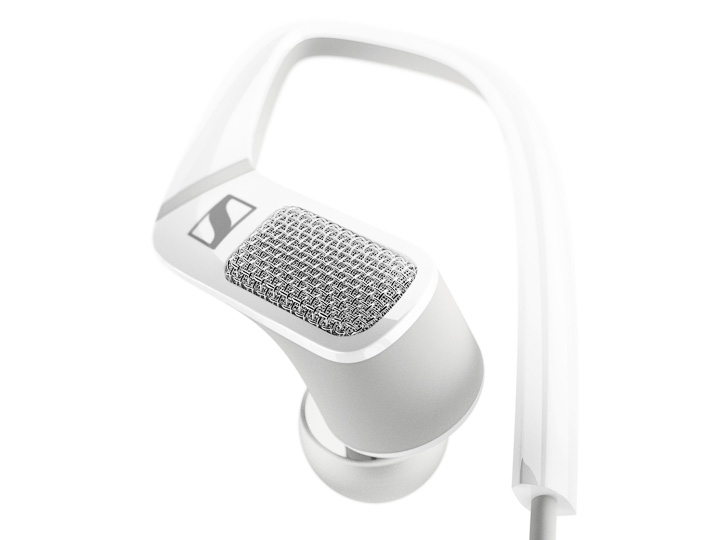 However, behind those little silver grilles on the outside of the Ambeo Smarts is where the fun really begins. That hides a pair of omnidirectional microphones. These can be used to enable an extremely potent noise cancellation system. This uses what Sennheiser calls ‘Situational Awareness’, meaning you can switch between ‘Active Noise Cancellation’ (which is very good at swallowing up the world around you) and ‘Transparent Hearing’ (which amplifies the world around you without needing to remove the earphones). Transparent Hearing is not simply a mute button; it boosts the midrange to accent articulation of voices. This is useful in an area of high ambient noise, such as trying to hear a flight attendant over a jet engine. Its level is controlled by Sennheiser’s recommended SmartHeadset app, and ranges from almost no augmentation to a marked amplification – great for spies, travel, and the hard of hearing.

But it’s the binaural recording part where the Ambeo Smart Headset lives up to that ‘smart’ part of its name. Working with recording experts Apogee, Sennheiser included built in A/D and D/A conversion, ‘Soft Limit’ gain control, and microphone preamps in the stick-of-gum sized control pod connecting headset to iDevice. There are two level settings and the automatic gain control is free from obvious ‘pumping’ effects, and the microphone preamps are effectively noise free. Note, however, that because of the processing power this recording circuit draws, you don’t get to monitor the sounds you make as you record them.

Using the Ambeo Smart Headset in a video context using the standard iOS camera app requires learning to always point your head in the same direction as the smartphone. Similarly, for audio-only field recordings (on Apogee’s MetaRecorder app), remember that it’s best that you remain still and quiet; although the Ambeo Smart is extremely well isolated from the noisy sack of bones located between the microphones, there’s only so much it can avoid – a loud sneeze mid-way through a recording can seem like the world is exploding! 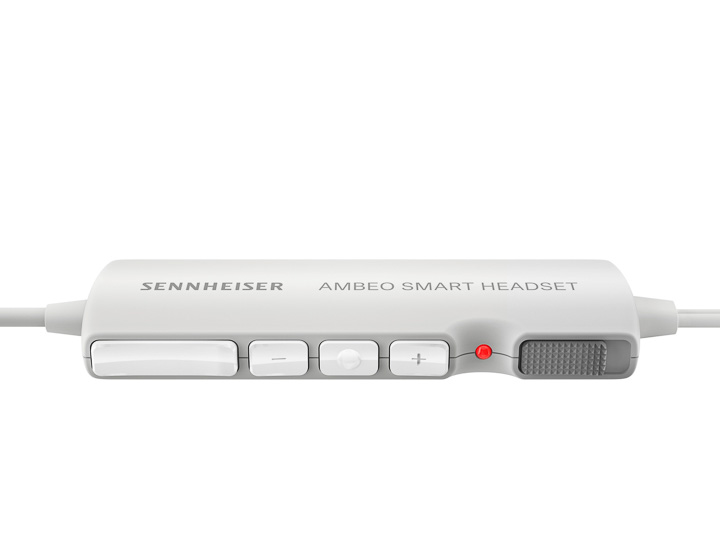 It’s worth persevering though because the fascination with binaural sound played through headphones is beguiling; soon, you’ll feel a burning desire to get up early and catch the Dawn Chorus or take a walk through a vibrantly noisy environment like a bazaar or a bustling street, only to play it back later that day, enthralled. Expect lots of binaural recordings of cats on YouTube.

Better microphones, no abrupt movements, and the fact that no living, breathing human being is totally quiet, all mean that a dummy head confidently outperforms the Ambeo Smart Headset. However, it’s also worth considering that a dummy head on a stand with cables running to a field recorder is ‘somewhat’ conspicuous and can cost as much as 25×more than the Ambeo Smart Headset.

That democratisation of binaural is what makes the Ambeo Smart Headset so great. And will be even greater when it can be used with the more 3D-chummy Android system. It may be on the ‘specialist’ side, but the Sennheiser Ambeo Smart Headset is in a class of its own.