You can start almost any review of a VPI turntable with, “A few years ago, VPI revolutionised a sector of the high-end vinyl market. Now it’s done it again.” And guess what? With the VPI Prime 21 and Prime 21+, it’s changed the game once again.

VPI uses an ‘if it ain’t broke. Don’t fix it’ model for many of its best designs, allowing a slow but continual upgrade of products over the years. As a result, it’s not hard to see the DNA gone into the Prime 21, as it echoes the design used first in the Prime, then Prime Signature above it and Prime Scout below. The Prime 21 slots in between Prime and Prime Signature, financially, design-wise and sonically. And, while 2020 might have been the year everyone wants to forget, the VPI Prime 21 celebrates 2021 in style. 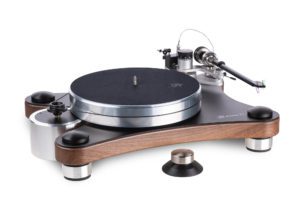 I have a lot of time for the Prime design, and I’ve logged a lot of hours with it too. I bought the original Prime after reviewing it in Issue 146, and still use that turntable on a regular basis. However, long-term use does highlight a few ‘foibles’ with the original design. The finish – while good – isn’t quite as sumptuous as models like the Signature and beyond. Perhaps most importantly, though, the Delrin feet and the arm feel a little bit too ‘fiddly’ for a deck of the VPI Prime’s level; it makes perfect sense for a four layer foot and a 3D printed unipivot to feature in models like the Prime Signature and the Avenger line, but it seems a little ‘tweaky’ in a turntable that is often compared to top-end Regas and Well-Tempereds (OK, so an arm that has a bearing made up of a golf-ball, a piece of monofilament and an oil bath is perhaps the definition of ‘tweaky’, but in use the Well-Tempered arm is easier to set-up than you might first imagine). None of these things are a deal-breaker, which is perhaps why the Prime has proven so successful and sparked its own VPI range, but they are observations none the less.

Clearly, they are also observations that have been recognised by VPI too. The Prime 21 is the Prime given a few buffs and an extended remix. The overall fit and finish is improved (there’s a logo and its semi-matt black finish looks deeper and richer). What’s perhaps not so immediately visible is beneath that richly finished plinth is a new machined top plate with additional bracing and isolation (you can tell… it’s a lot heavier).

Those feet of the Prime are replaced by the ones first seen on the HW40, which are both bigger, more of a colour contrast, easier to install and even more feedback-proof than the originals.

Perhaps the most noticeable change is the move from the JMW 3D-10 Reference arm to a 3D Gimbal tonearm. This still retains the VTA adjustment tower but a conventional gimballed arm means no more jiggling tonearm when it comes to lifting the cartridge on and off the record. In truth, you get used to this very fast, but can be off-putting to those new to high-end decks. Once again, it’s something that is perfectly fitting in a Prime Signature and beyond, but those viewing the Prime as their first real high-end turntable might get the jitters when they see the arm moving so freely. VPI spent a lot of time developing a gimballed tonearm that didn’t undermine the performance as they heard it; the development that first went into the Mark Levinson turntable and then to the limited edition HW-40 turntable meant that VPI felt it was possible to make a high-end gimballed arm without throwing the baby out with the bathwater, and with its 3D-printed arm, it offers a ‘best of both worlds’ approach.

There are two ‘versions’ of the Prime 21. The standard version, and the Prime 21+. What the 21+ adds is the Shyla moving coil cartridge and the new Weisline tonearm cable. Named after Mat Weisfeld’s daughter, the moving coil design is a collaboration between Audio Technica and VPI, using a line-contact stylus, a 0.26mm boron cantilever and PC-OCC coils (and terminal pins) wrapped around a neodymium magnet and permendur yoke, all in an aluminium and plastic body with a classic dark red, black and gold livery.

Weisline is a collaboration between VPI and Nordost. It’s a solid-core design, using four 28 AWG oxygen-free copper conductors in a Fluorinated Ethylene Propylene extrusion. The twisted pair layout allows each channel conductor to be separately shielded, with a separately shielded earthing cable, and all three are terminated in low-mass, gold-plated conductors. Available separately, these would add £1,750 and £600 respectively to the cost of the Prime 21 if bought separately, so you save several hundred pounds buying the Prime 21+ as a complete kit. It also comes set-up and ready to use out of the box.

The turnkey nature of the Prime 21+ is worth discussing, both in terms of the process and the ideas behind that process. Like the Prime, the Prime 21 is extremely easy to set-up, and – unless you are all thumbs or extremely ‘refreshed’ – the Prime 21+ makes the job even easier. Everything you need is in the box, there’s an instruction manual and an instructional video. It’s possible to get from opening the box to playing music inside of 20 minutes, although I’d argue that most will do this in an hour or so. Prime 21+ takes away the need to install a cartridge or scrabble round for phono cables. Of course, you can devote hour after hour to fine-tuning a vinyl set-up and many experts are paid handsomely to do just that. But, a high-end turntable without the need for a mechanical engineering degree to install it… that’s an attractive proposition for many.

The worry was, however, that this is lazy system-building; that the expert could put together a better Prime 21+ than VPI itself. The response to that is ‘shut up!’… if you want to roll your own, there’s a Prime 21 with your name on it and it’s £2,000 cheaper than the Prime 21+. Then you can spend about £3,000-£3,500 more trying to get to a point where you create a package that’s better than the Prime 21+. That’s the joy of the Prime 21+; far from lazy system-building, this is a carefully assembled set of products that work together far better than they have any right to. 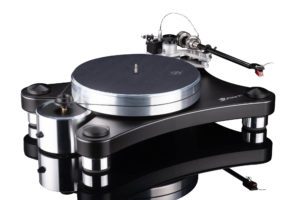 How that carefully assembled system sounds is a clever mix of grace and space, with a liberal sprinkling of pace to boot. It’s extremely dynamic-sounding and throws out a huge soundstage. This is not dissimilar to its Prime older brother, but more so… and not dissimilar to the HW40 limited edition deck, but not to the same extent. The Prime 21+ is no shrinking violet in its presentation; this is music writ big and bold, although the deck is also controlled enough to keep that bombastic performance in check when not called for. ‘Norman F***ing Rockwell!’ by Lana Del Ray [NFR!, Polydor/Interscope] is kept controlled when it’s just her voice and a piano, but full-scale during the orchestral swells. The difference between the original Prime and Prime 21 is perhaps most noticeable here, as the newer deck has a greater ability to ‘scale’ with the music. As the original was already a front-runner here, that’s a very good sign.

Bass, too, is first rate. It doesn’t matter whether that bass is orchestral [Beethoven’s Fifth, Kleiber, DG/Linn Recut] or synthetic [Bassomatic’s Set The Controls For The Heart Of The Bass, Virgin], the bass is controlled, deep, yet bouncy enough to keep all bar the most beat-obsessed happy. This excellent bass is largely matched by an excellent midrange and unrestrained, free, and expressive high-frequencies, but even though you hear a considerable amount of detail in the midrange, your mind is so swayed by the expansiveness of the soundstage and the size of the presentation, you’ll end up almost failing to notice how good the midrange is until some time later.

The only real downside to the Prime 21+ isn’t really much of a downside. The deck really completes itself with the optional ADS power supply, which brings greater control over speed precision (and makes changing speed less of a belt-driven activity). This isn’t a concern with the Prime, as you expect some manual speed changing at the lower price. 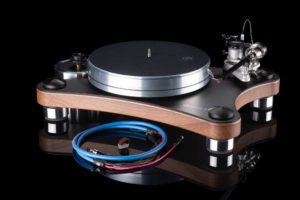 In the Prime 21+, VPI has achieved the turn-key high-end turntable without compromise. Sure, you can build something better, but you probably won’t do so for anything close to the same money. Each component in the system is a ‘honey’ and putting them all together sings like an angel. Unless you enjoy the self-flagellation of picking and mixing (or you have a favourite cartridge that you must use no matter what), I find this a tough act to beat at anywhere near the money.