Max Townshend is not the sort of guy to make a product and then focus on marketing and selling it; he is an engineer to the core and cannot stop thinking of ways to improve his products. He is one of the few in this industry that doesn’t follow the herd, who goes back to the science to find new solutions to the problems of audio signal retrieval, control and transmission. He was the first to introduce cryogenic treatment, an idea he shared far and wide and shouldn’t have been surprised that it was copied by all and sundry. As a result his latest treatment system, Fractal, is a closely guarded secret and all of the Townshend products that have copper in them get a full dose of it. The highly regarded Allegri transformer passive preamp uses wire that has had this treatment and is one of the best sounding preamp’s you can get. But it’s not very big, has very basic features and doesn’t have remote control, so Max decided to make a better Allegri.

The first attempt at this was the short-lived Enigma that appeared at one Bristol show but never went into production because it attempted to use multiple switches to provide a wide range of small volume steps, and getting switches that were sonically consistent proved impossible. For the Allegri Reference, Max went back to the drawing board and decided to use relays, which are essentially switches in a vacuum and thus more consistent in operation and far longer lasting. By using 120 relays and a pair of autotransformers, the Allegri Reference offers 129 half-decibel steps; a far wider range than anyone has managed with stepped volume pots. Townshend has also managed to include a remote control for input, mute and volume using Apple’s machined aluminium handset. In fact it does more than that; you can choose whether to display volume as a minus dB figure or conventionally with higher numbers indicating higher volume. The display can be permanently on or off, or remain on for five seconds or five minutes after an action. The Allegri Reference has five inputs but these are unusually configured with two shared by XLR and RCA sockets and one shared between the minijack on the front and RCAs on the back. The gain of these can be individually set so that you get similar output regardless of the source. The final feature is a home cinema bypass that can be assigned to any input. 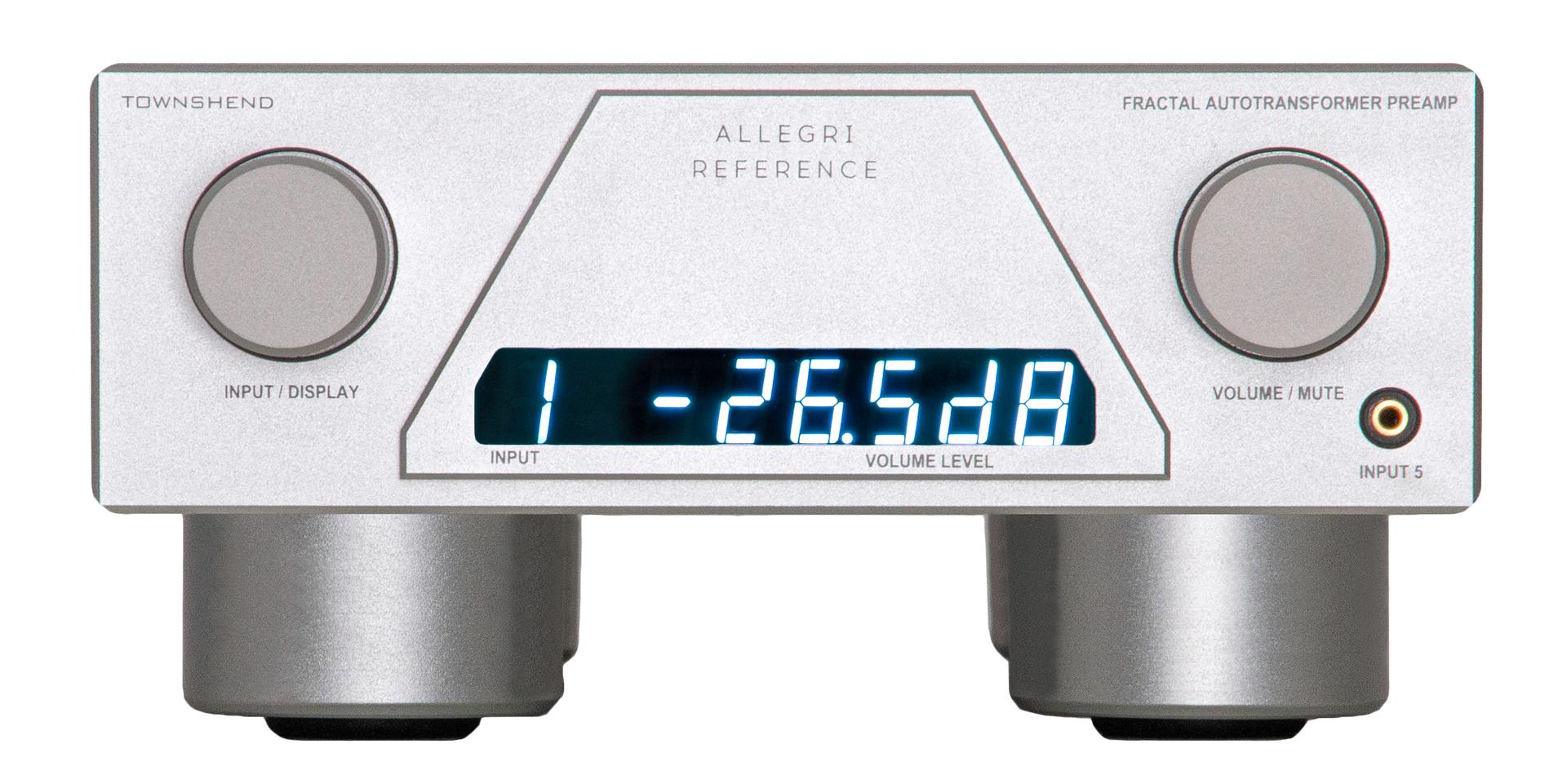 The presence of a display and the processor that enables these features indicates that there is some power present. This is provided by a 12v wallwart that plugs in the back alongside the in- and outputs. There is no on/off switch but it’s very low power.

The difference between the Allegri Reference and the Allegri+ is not just the relay operation and remote control; it stands on rather large feet. Those familiar with Townshend’s Seismic isolation supports will recognise that the same approach has been used here. In order to isolate the preamp from vibration in the supporting surface it uses damped springs that are selected specifically to keep out energy for the given weight of the component. The Allegri Reference is mass-loaded and uses constrained layer damping in that half-width but usefully full-depth case.

I have been using a Allegri and latterly an Allegri+ for some time now and rarely find a preamplifier that can match its transparency, openness and timing abilities. The absence of electrical power means it has an instant advantage over active preamps and the use of autotransformers gives it the edge over transformer-coupled preamps in my opinion. So I thought I knew what I was getting with the Allegri Reference but boy was I wrong! It’s a monster of the most refined and revealing variety that I have ever encountered. It has many of the characteristics of high-end preamplifiers such as a very smooth effortless delivery, wide bandwidth and high transparency to detail but it goes further in all these departments than the majority. What is so entrancing is the combination of speed, resolution and a total absence of grain that it delivers, it’s massively refined yet infeasibly dynamic and reveals so much so that the tendency is to play longer and louder than is good for one’s familial partnership.

Its abilities seem only to be limited by those of the source that provides the signal; the better that is the higher the sound quality, which means it’s very easy to differentiate between sources and recordings alike. Familiar music offers up low level resolution that was possibly hinted at before but now has shape and character such that it’s easy to hear and place in the context of the music. It makes complex music more accessible by virtue of eliminating the edginess and glare that so many preamplifiers introduce and presents it in a totally coherent fashion. While power amplifiers are all generally pretty good – albeit with some better than others – preamplifiers come in a far wider variety of standards from ‘tolerable’ to ‘outstanding’, with thousands of gradations in between. It’s hard to appreciate how critical the preamplifier is until one like this comes along and reveals that what you thought was a limitation of the source was actually a distortion being added by the preamp. The Allegri Reference appears to be devoid of additive distortion, which is very rare indeed, but such is the clarity of everything that passes through it, from Javier Perianes’ incredibly subtle piano to Esperanza Spalding’s multi-layered vocals and beautiful bass playing that this is the only logical conclusion.

It makes for intoxicating listening with absolutely gorgeous bass alongside real delicacy on Michael Wollny Trio’s Wartburg [ACT], while the breathy nuances of Lou Reed’s ‘Vanishing Act’ [The Raven, Sire] show how the fragility of voice and piano are perfectly matched. The nearest preamps I’ve heard to the Allegri Reference are very high end tube examples from Kondo and Silbatone but they don’t necessarily have such a low noise floor as has been achieved here, and they cost considerably more. What I found most engaging about this degree revelation is the life and energy that it brought out of favourite records, Joni Mitchell’s ‘All I Want’ [Blue, Reprise] has a crystalline transparency that exposes the poignancy of the song, and the speed of banjo playing by Gwenifer Raymond on ‘Bleeding Finger Blues’ [You Never Were Much of a Dancer, Tompkins Square] is clearer because you can hear the attack of each note, as well as the tapping of her foot. Timing is not apparently enhanced or affected in any way so if the source delivers the goods you know all about it, especially when the Grateful Dead are playing live in their heyday [Europe ’72, Warner Bros], and then it’s as good as being at the original event as anyone with only one pair of speakers can achieve.

Recently, I put on Television’s Marquee Moon [Elektra] which is a deliberately edgy, raw sounding production that can sound thin and etched on some systems, but here it retained all the angst and intensity with that lo-fi balance but didn’t grate, it just sounded the way it should, which made for maximum thrill power. Meanwhile, Lana Del Rey’s NFR![Polydor] is a very polished studio construct that always sounds good. With the Reference, the bass was less crunchy and the voice and piano more nuanced; the total absence of grain meaning that edges are not exaggerated and quieter sounds easier to appreciate. The imaging was also outstanding with tremendous depth both fore and aft of the loudspeakers, something that appeared on a lot of other recordings that usually sound fairly flat. 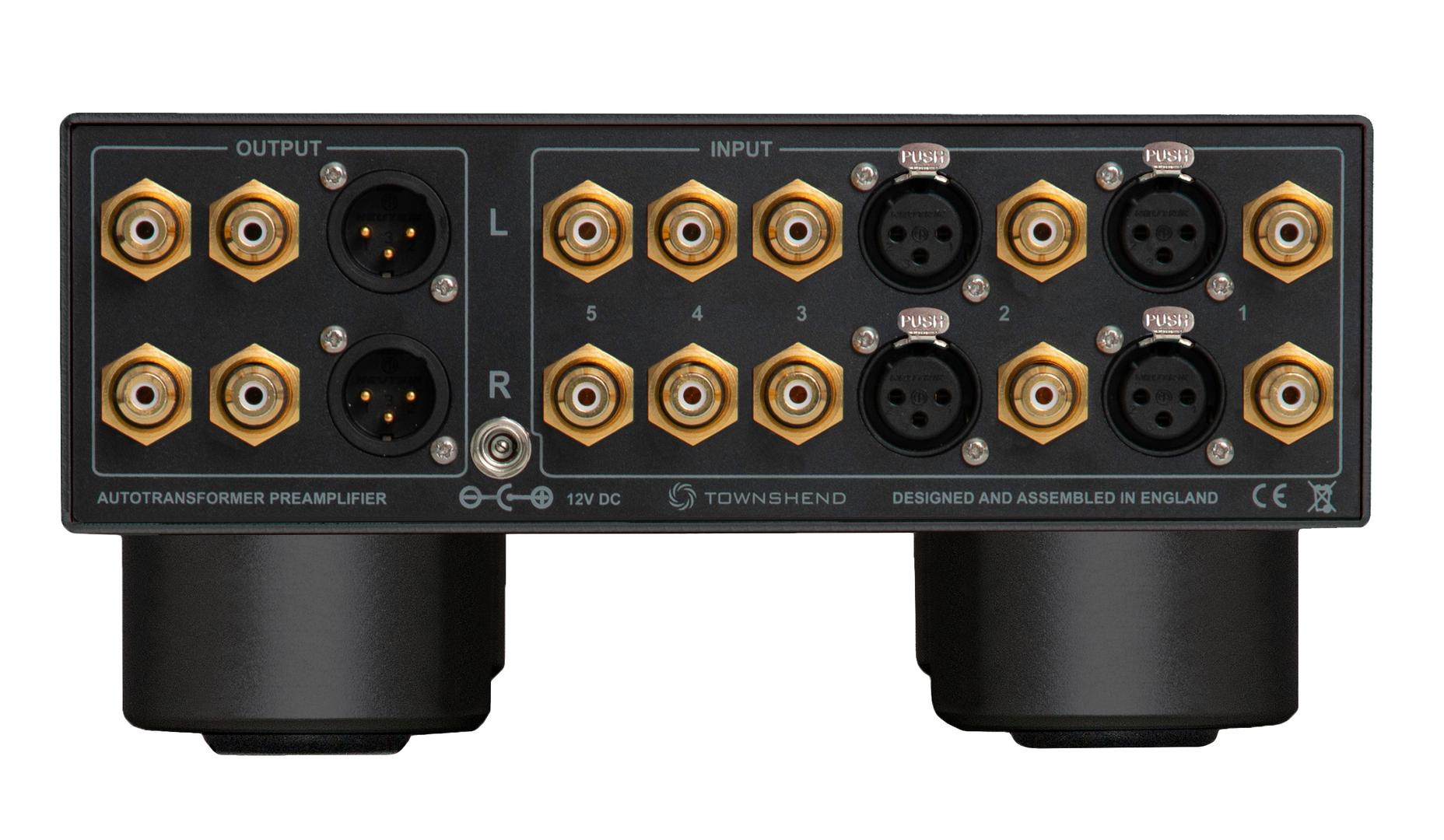 The Townshend Audio Allegri Reference is a genuinely high-end preamplifier with a good range of inputs and features in a well built and extremely well thought out design. If it was in impressive casework, the price would be three or four times what is being asked here and – in truth – that’s what Townshend Audio needs to do for it to be taken seriously. But, like other Townshend products, you get state of the art sound quality for a significantly more accessible price than preamplifiers at this level usually command, and that seems like a pretty good deal to me.