The very top end of turntsablism is dominated by a few great names, but perhaps the biggest one at this time is the Japanese brand TechDAS. Coming from good high-end stock (chief designer and CEO Hideaki Nishikawa is one of the doyens of high-end audio, and worked at Stax and – perhaps more relevant for the current brand – was chief designer for Micro-Seiki). In other words, his skills as a turntable designer are some of the best in the business.

The original Air Force One turntable is a remarkable affair, using air damping and vacuum hold down to deliver one of the most authentic sounds in record replay. Unfortunately, such audio perfection comes at a cost, and the Air Force One was at the high end of super high-end audio. The Air Force Two swapped oil damping for air, and came with a one-piece platter to make it less expensive, but ‘less’ was still out of reach for almost all of us. Which brings us to the Air Force III, the ‘affordable’ TechDAS design.

Air Force III ues a smaller chassis, which not only lowers costs, but means the deck can support up to four tonearms. This is made from a precison cut block of solid aluminium. Aluminium features strongly in the platter, too, as the basic type platter is made of high-mass solid aluminum. TechDAS claims other types of platters are in development and will be made available as optional upgrades. The company usually honours its pledges, so you can bank on that claim.

Instead of having built-in insulators as seen in the bigger Air Force designs, the turntable sits on four feet, using a pin point support method, which will prevent feedback in most settings (TechDAS is considering an air-insulation platform for more difficult environments). Most importantly however, the Air Force III uses the core ‘air control’ technologies of the Air Force One, such as an air bearing that floats the platter at 30µm and a vacuum disc hold down. Unlike most air-bearing arrangements, TechDAS prefers a compression system to a glorified fish-tank pump, because such things (found mostly in dialysis and heart-lung machines) are inherently ripple-free and noiseless. Just a mark of how obsessive – in a good way – the TechDAS team are, the deck has speed control, with ±0.1rpm adjustments, not for DJ use, but for those with perfect pitch who can’t stand a record that is cut a fraction of a rpm too slow or fast.

Speaking of obsession, our deck came supplied with the Swedish Audio Technologies arm, a 9” gimbal-bearing tonearm that features extensive use of carbon-fibre in its design. The SAT arm is designed by Marc Gomez, a Spaniard living in Gothenberg in Sweden. His background is engineering. Lots of people have a background in engineering in the audio industry, but few have one quite like Marc Gomez. His client list looks like a Who’s Who of top European engneering projects: everything from the Porsche Carrera GT, Hewlett Packard plotters, and Rolls-Royce water-jet engines, to medical devices for Astra Zeneca, components for Saab, and Volvo. Oh, and the Ariane rocket engine. So yeah, “It’s not rocket science” jokes don’t apply here. His areas of specialism are mechanical engineering and materials science, especially in the development of parts made by composite. But, his passion is audio, and specifically meeting the needs dictated by a cartridge when tracking the groove on a record, so in 2010, Gomez set about designing and building the best pick-up arm ever. Which is something of a bold claim, until you actually see the arm in the flesh. 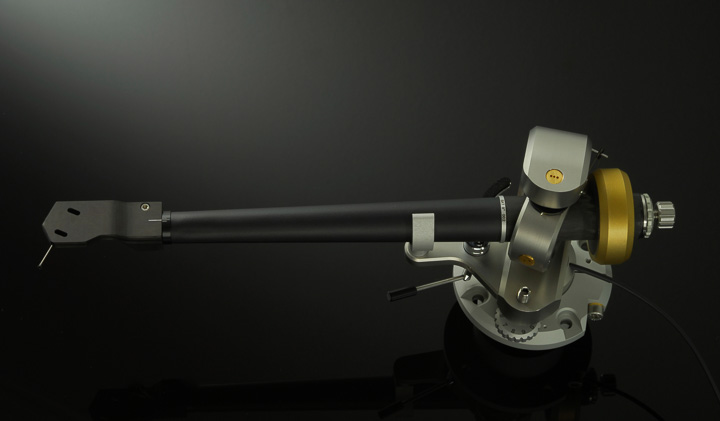 His arm uses a sophisticated single-piece resin-impregnated carbon-composite armtube, damped three ways on the inside, and sheathed in a polymer on the out. The detachable headshell uses layer-upon-layer of carbon sheet (about 40, apparently), although uniquely the lead-out wires run captive through the arm tube itself. The bearing is adjustable to suit the compliance of the cartridge (now that’s a clever idea!) and made of tungsten carbide pivots seated on sapphire. Everything, from the ‘intelligent’ anti-skate weight, through the way the bearings sit in full horizontal and vertical balance, to the clever almost-on-the-fly adjustments of both SRA and VTA, speak of the same kind of uncompromising obsession that built the turntable.

In terms of installation, the clash of ideologies has a bit of a resolution. The TechDAS Air Force III is the kind of turntable you could set-up for yourself if you are only slightly handy. You need to apply good working practices (levelling and air-line dressing are good examples) but anyone capable of following an instruction manual should be able to put together the Air Force III relatively easily. As to the SAT, it’s even easier, because you are not going to be the person who sets it up! It’s not overly complex, but painstaking, and requires training.

Give an expert a day to install the turntable properly, give it a really good cartridge (in this case, a rare Koetsu), and a really fine phono stage (take your pick) and you are handed a sound quality that redefines what is possible from vinyl. The crazy part of this is this is the most unmagical sound from a turntable you’ll likely ever hear, and paradoxically that’s what makes it so magical. Gomez is often at pains to call the SAT a pick-up arm instead of a tonearm, and I can see why. There is no tone in the SAT, no resonant richness, no ‘that’s where the magic happens’ in the performance. It’s just the most ‘get out of the way’ arm you’ll ever hear. This was the most complete reproduction of the LP, noticeable even from the run-in grooves (they sounded different on each record, which is how they are supposed to sound). That absolute sense of fidelity and precision that ticks all the audiophile boxes shone through, but this was just so much less than that. From the first track to the last, from Gilbert and Sullivan to Television, from CBS to Decca and back again, the SAT arm just played music without grace or favour, without addition or subtraction, and without any kind of guile. At the end of a quick blast of Elvis at Sun, followed by a louder blast of ZZ Top, you knew this was not something normally experienced. This was something so unspecial it was deeply special. Maybe something better will come along, but for now every other arm I’ve tried prior to this sounds like a tonearm, not a pick-up arm.

You know when you have experienced that rare sonic paradigm shift, because you go back home, turn on your own – usually pretty damn good – version of the same, and it sounds contrived, artificial, and wrong. That’s what the SAT does to you!

I’ve concentrated on the SAT because it does so much more than the usual arm. But it would be as nothing without a damn good turntable to help it make less of an influence than usual. The Air Force III is that turntable. It adds nothing and subtracts little. Moving up the Air Force line lets more of the studio through in terms of air and solidity, but all you have in the Air Force One is there in the Air Force III, just written a mite smaller.

Which one is right: does the turntable or the arm make the most difference? Judging by the performance of the SAT, I’d say the arm, but the deck isn’t just along for the ride. So, the answer is probably… both! Fences are comfy to sit on sometimes! 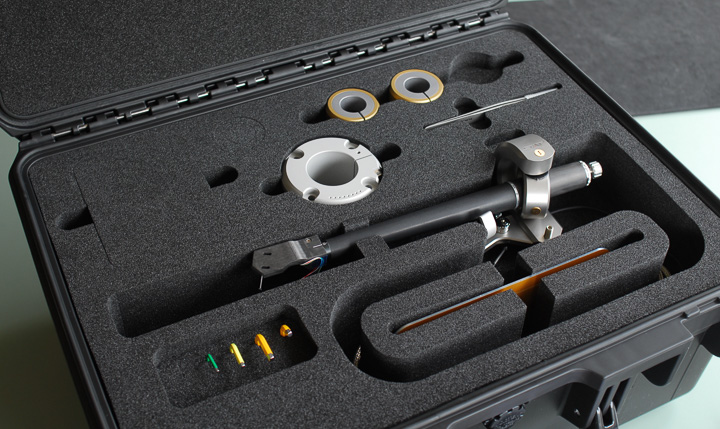 These are not cheap devices. The TechDAS Air Force III might be the company’s entry level, but it still costs as much as a car. So does the SAT arm, and you aren’t going to penny-pinch elsewhere at this level. But the crazy thing is when you get to hear them, you might think that is money well spent!

Bearing type: Air bearing that lifts up the platter to 30µm