As you may have read, Sennheiser’s search for a buyer for its high-profile, well-regarded yet not-all-that-profitable consumer audio division ended at the start of May 2021. The announcement that Swiss hearing care company Sonova Holding AG is now the proud owner of all that history, all that cachet and all those high-profile, well-regarded yet not-all-that-profitable soundbars, headphones and DACs came just ahead of the launch of these IE 900s – which makes them a product that signifies both the end of an era and a brave new beginning.

But new ground can only be broken once, right? In the world of consumer electronics in general and hi-fi equipment in particular, once that new ground has been broken, everything that comes afterwards is just a variation on a theme. And you’d be forgiven for thinking the good people in Sennheiser’s consumer audio departments might have bigger fish to fry right now than simply turning out a variation on a theme, no matter how impressive that variation might be. Anyway, on the face of it the biggest variation on the wired in-ear monitor theme the IE 900 represent revolves around their remarkably hefty asking price.

You’d be hard-pressed to come up with a consumer electronics category that’s currently less fashionable than wired in-ear headphones. ‘In-ear’ strongly suggests ‘portable’, and ‘portable’ is currently a euphemism for ‘wireless’. And let’s face it, ‘£1,099 per pair’ has never been all that fashionable where in-ear headphones of any configuration are concerned. So it seems reasonable to suggest the IE 900 are something of a niche product. But this is not to suggest Sennheiser hasn’t lavished the sort of attention on the IE 900 that has always made the company’s in-ear monitors such compelling propositions. 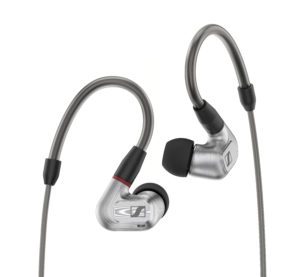 Even if considered simply as a feat of engineering, Sennheiser’s achievements with the IE 900 are significant. Each earpiece housing is milled (on five – count ‘em! – axes) from a single billet of aluminium – on the outside, this creates an interestingly contoured, jewelry-like appearance, while on the inside it means a triple-chamber absorption system. Dubbed ‘TC3A’, the system (which also features an acoustic vortex milled into the nozzle) is designed to counter the ‘masking’ effect that manifests itself at lower volumes. In simple terms, human hearing struggles to identify high-frequency sounds if lower-frequency sounds occur at the same time and at a higher volume – so the absorber system removes peaks of interference, allowing uncoloured reproduction of the frequency range even at modest volume levels. That’s the theory, anyhow.

Doing the sonic business inside each earpiece is the most recently fettled version of Sennheiser’s 7mm extra wide-band transducer. This new ‘X3R’ transducer, naturally enough, shoots for super-tight tolerances and class-leading fidelity – Sennheiser is claiming the lowest unit-to-unit variations ever achieved in miniature dynamic drivers such as this. The company uses precision cameras to monitor components during production, and tests the transducers before and after pairing. A claimed frequency response of 5Hz – 48kHz and THD of 0.05% at 94dB does rather hint at high-level performance. Many rival manufacturers like to incorporate a balanced armature or two in support of a dynamic driver when designing their own high-end in-ear monitors – but Sennheiser (not without justification) asserts that one driver to cover the entire frequency range, if properly implemented, represents the epitome of high performance.