Although Roksan is one of the fixtures in the Brit‑fi firmament, there has been some realignment of late. Last year, practically without warning, the last of the two original founders of the company sold Roksan Audio to loudspeaker company Monitor Audio. The reason behind the sale was understandable on both counts; Monitor Audio wanted an established electronics brand to partner its speakers and, after more than 30 years, the founder wanted a break. This ultimately caused a cross-country factory move and some changes in distribution, but the Roksan product line remains unchanged.

This poses a slight problem for Hi-Fi+, because most of the Roksan product line is already well-covered. However, the latest Radius 7 and its matching Nima unipivot tonearm have yet to receive a review, and the Corus Silver moving magnet cartridge has never had an airing (we did look at the Roksan Corus, but back in issue 24). As they make a perfect partnership, we felt it was time to check them out, especially as there is a limited edition version with a built-in charitable donation that is worth describing.

The most obvious change in the Radius is its extensive use of glass-coloured acrylic in the chassis and subchassis. This gives the Radius 7 a greenish hue, but Roksan happened upon a pink-tinged variant that delivered the same goods as the standard acrylic. To extend the pink motif further, the normally neutral-coloured Nima arm also sports a pink armtube. The colour scheme is not just style led, as a percentage of the proceeds of the Radius 7 Pink goes to Breast Cancer Care. Having lost my own mother to metastatic breast cancer in 2005, this is a charitable venture I can relate to.

Charitable donation to Breast Cancer Care notwithstanding, the demographic profile of the audio enthusiast world is so heavily weighted toward middle-aged men, that I can’t help wondering just how successful a pink turntable might be, especially in a world still so dominated by black, silver, and wood veneers – it’s like the last 30 years of interior design just passed us by. In fact, the deck looks remarkably good, both in standard finish and in pink. In fact, I’d argue that it looks slightly better in pink, because the green tones can look a bit ‘zombie apocalypse’ in the wrong light. If your deck sits under the wrong light, snap up a pink Radius fast.

OK, no more colour scheme talk. The Radius itself is an improvement over the Radius 5, largely thanks to a better motor power supply (which also now includes a speed control switch, instead of having to swap belt positions on the motor spindle), and better deck-to-motor decoupling. Like most Roksan designs, the turntable is built up of separate layers (we’ll use the terms ‘chassis’ and ‘subchassis’ for convention sakes, but ‘motor layer’ and ‘bearing layer’ are probably more accurate). Viewed from the top, the two layers look like eccentric cams, centred around the bearing itself. The two layers are joined together with decoupling standoffs, and there is no construction required by the user at this stage. Instead, all you need to do is mount the lock-nut feet, dress both the captive power and arm cable, put the opaque acrylic platter on the bearing housing, and attach the white circular belt to the outside of the platter. Once installed, aside from an annual re-lubing of the bearing itself, the turntable is effectively maintenance-free. You need a good light, rigid, and level surface, and you might want to consider a record clamp (consider it, but don’t actually go for it, as in most cases it undermines the sound).

The Radius 7 comes supplied with the Nima arm, and you would be ill-advised to break up the band. the Roksan’s Nima unipivot looks ostensibly similar to Naim’s popular yet discontinued Aro arm; so similar in fact that Naim users still maintain that Nima is an anagram of ‘Naim’ and not ‘famous, fair, little king’ in Persian (which might seem more logical, given the Persian roots of Roksan’s founders and that so many of their other turntable products are similarly named). In fairness, the resemblance is striking, both in looks and performance, and it’s little wonder that the arm does end up on the end of a number of LP12s in place of the hard-to-come-by Aro. In fairness, the Nima’s design commonalities with the Aro are more to do with working from similar directions rather than a direct ‘lift’ of the design (Roksan had been working with an underslung counterweight before the launch of the Nima, and there are only so many variations on the ‘cup on a point’ pivot housing that can be made). But if you want a tonearm that has truly striking midband detail retrieval and an infections sense of rhythmic ‘bounce’, the Nima arguably the only arm this side of £1,000 that can make the grade. Set up is more ‘demanding’ than the deck itself, but with the cartridge pre-mounted, most of that involves setting tracking force, anti-skate, and azimuth. The deck and arm both come with comprehensive, diagram-led instructions should you decide to go further than the Corus cartridge.

A variation of Goldring’s 1000 Series moving magnets, the Corus Silver is the Last Man Standing of Roksan’s MM series. Like the 1000 series, the body of the Corus remains constant, but the Silver sports a Gyger II stylus profile and improved assembly and suspension system over its predecessors. This means that any existing owners of Roksan Corus cartridges can upgrade them to Corus Silver status simply by buying a replacement moulded stylus body piece. The cartridge tracks at about 1.9g. 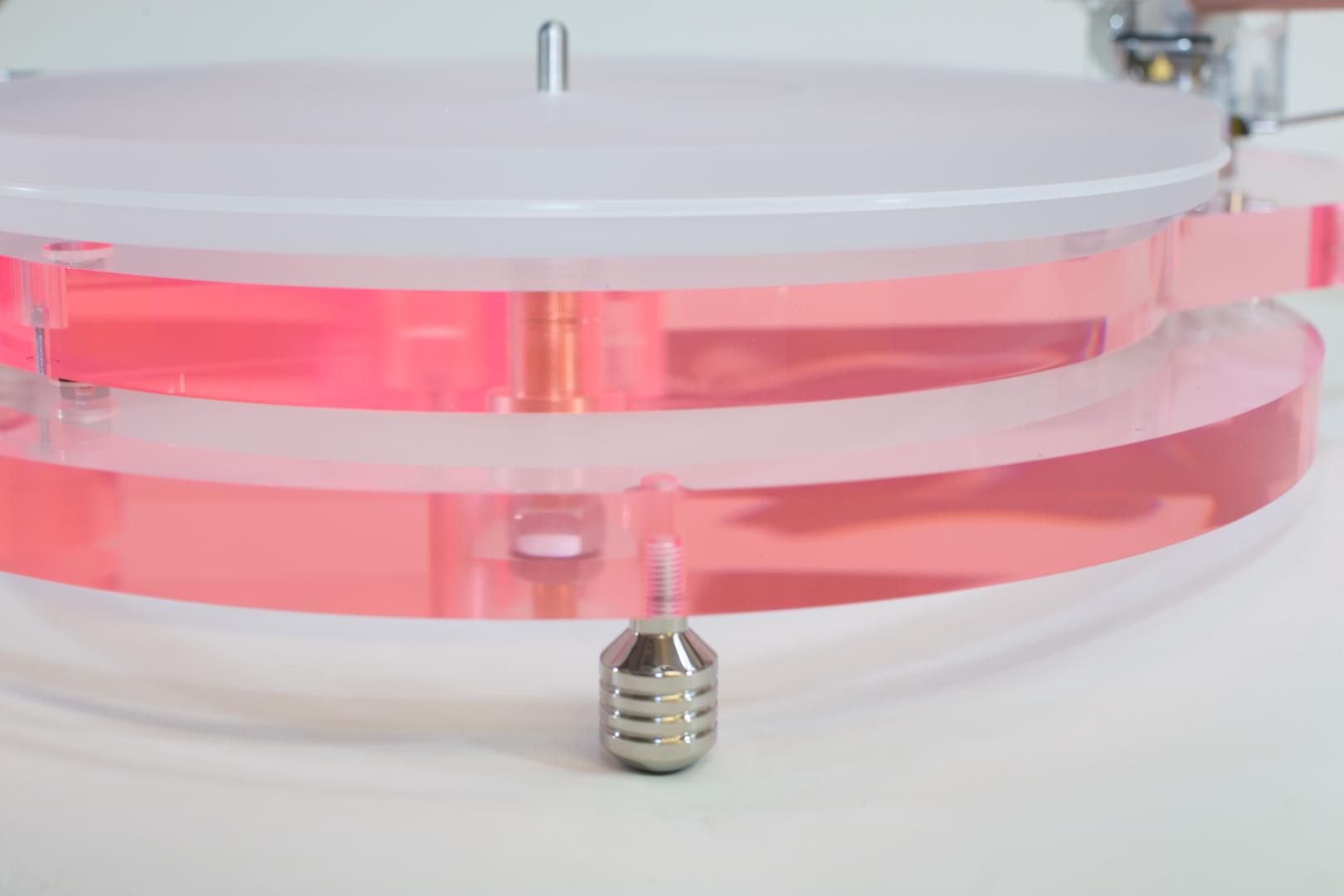 Roksan’s Radius package has always sat somewhere between the entry point and the super-decks, taking many of the positive elements of both, with few trade-offs in the process. So, the Radius 7 has none of the fussy demands of set-up, installation, and partnership of the super-decks, but delivers the kind of remarkable detail and mid-band clarity that most entry point designs will never be able to achieve.

The sound of the Radius is just the right side of ‘energetic’ and ‘vibrant’ to make a system come to life without it sizzling and sounding too exuberant. It has a great sense of dynamic scale, range, and energy, allowing it to really shine when playing my resident test recording of the LSO and D’Oyly Carte company performing The Pirates of Penzance [Decca]. You get the sense of physical singers occupying spaces on stage, rather than a cardboard cut-out stereo image. It brings out the sheer sense of enjoyment they had in playing the parts, too, such is the level of detail across the board. Moving over to ‘Prime Mover’ by Zodiac Mindwarp and The Love Reaction [Tattooed Beat Messiah, Vertigo] showed that this is not simply a forward sounding turntable, as it managed to convey the bright, toppy, late-1980s recording with all its energy intact, but added nothing and took nothing away.

Compared to a more expensive VPI Prime, the Radius does surprisingly well. This is a better comparison than it might first seem as both use unipivot tonearms. The two go largely toe-to-toe at the upper and midrange points, but where the Prime pulls ahead is in the bass. While the Roksan delivers a clean, taut bass, the VPI delivers a clean, taut, and deep bass. The Roksan is not bass light though, indeed, partnered as might be appropriate given the Radius’ price, the lack of overhang may be better suited to systems than more stentorian designs, which can sound stodgy in context. It’s just that the decay of the left hand of a piano seems to be less noticeable on the Radius.

The Roksan Radius 7 is well positioned, both in price and performance terms. This makes any bass limitations the Roksan platform might have less of a concern, because it is more likely to be partnered with systems that don’t plumb the depths. And the rest of the performance makes for an attractive, detail retriever, with excellent dynamic range, great vocal articulation, and a lot of energy. And, if you buy it in pink, you are not only getting something distinctive, but with a built‑in charitable donation. Strongly recommended, especially for systems in the £3,000–£7,000 mark.