The San Diego-based firm MrSpeakers has earned a reputation as a manufacturer of world-class headphones and not – as the name might suggest – loudspeakers. Over the past two years MrSpeakers product design efforts have centred on creating an expanding range of upper-tier (and often award-winning) ETHER-series planar magnetic headphones, which range in price from £1,475 to £1,700. Given this history, we have come to think of MrSpeakers as an upscale brand.

Therefore, the new ÆON from the company came as a bit of a surprise; this closed-back, planar magnetic headphone will sell for just £799.99 UK or $799 US—or around half the price of the firm’s famous ETHER models. Despite its accessible price, the ÆON is said to use most of the technologies and to offer much of the performance of the bigger ETHER headphones, which explains MrSpeakers’ marketing tag-line for the model: “No Compromise Sound & Comfort; Affordable Price”. 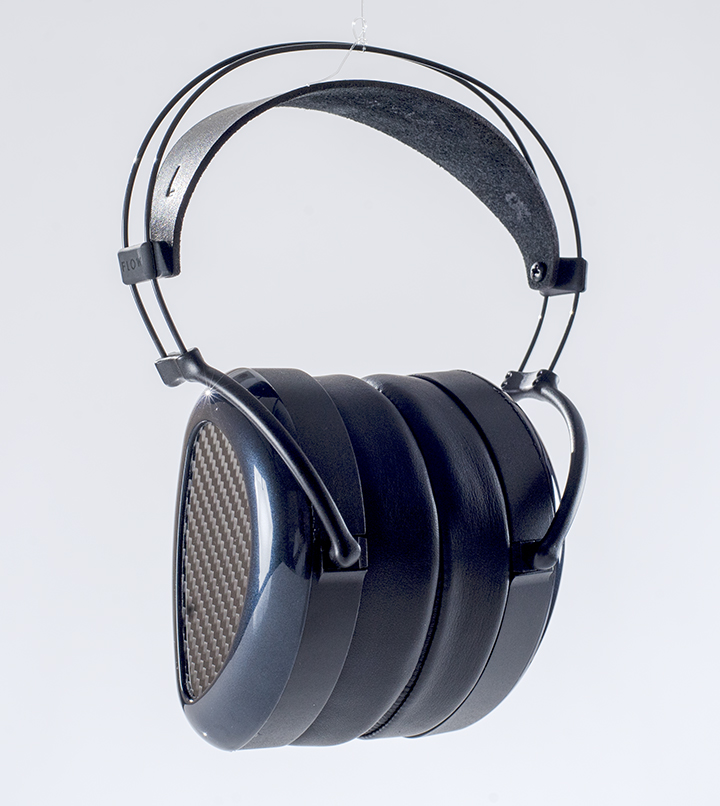 In spirit and in practice, the ÆON could be considered the descendant of MrSpeakers closed-back ETHER C and ETHER C Flow models, although the ÆON looks quite different to the ETHER headphones. In particular, the ÆON features attractive ear-shaped ear cups (much like many recent HiFiMAN models do), where the ETHER headphones sport large, circularly shaped cups. And, where the ETHER C ear cups are fashioned from carbon fibre, the ÆON ear cups are moulded using ABS material and finished in a delicious shade of dark metallic grey-blue lacquer, with inset genuine carbon fibre trim panels.

Like the ETHER models, the ÆON provides a NiTinol ‘memory metal’ headband frame, but one fitted with graceful new arc-shaped ‘hinge-free’ yokes that are considerably simpler in construction than those found on the ETHERs. Also like its more costly siblings, the ÆON features a comfortable dyed-through leather headband strap that is suspended beneath the NiTinol frame and attached to a pair of friction-fit, sliding strap keepers that allow adjustments to accommodate different head sizes. Thick, bevelled synthetic leather ear pads are included. Finally, the ÆON ear cups are fitted with MrSpeakers’ traditional four-pin HIROSE push-pull signal cable connectors. The ÆON ships with a set of fabric-covered ‘DUMMER’ signal cables (where the ‘DUM’ part of the name stands for ‘Distinctly Un-Magical) terminated with HIROSE connectors on the headphone end and with a combo 3.5mm mini-plug/6.35 phone plug adapter on the amplifier end.

On the inside, the ÆON features planar magnetic drivers that offer roughly two-thirds the working surface area of the larger ETHER drivers, but that otherwise use the two signature technologies that set all MrSpeakers planar magnet drive units apart. These technologies include proprietary V-Planar driver diaphragms and Trueflow magnet array waveguides. In a nutshell, V-Planar diaphragms feature lightly pleated or ‘knurled’ surfaces said to allow almost the entire driver surface to move in a linear fashion, rather than bowing inwards and outwards in the centre like the membrane of a drumhead. V-Planar technology is the brainchild of Dan Clark and Bruce Thigpen (of Eminent Technology fame). In turn, Trueflow technology is a clever system whereby the magnet array grid of the driver is fitted with miniature airflow-smoothing waveguides that help prevent distortion by reducing disruptions in airflow as the diaphragm moves back and forth. The key point is that the ÆON driver is, for all intents and purposes, a slightly scaled down ETHER Flow driver, which is a fine design pedigree to have.

Last but not least, the ÆON comes with a clamshell-type carry case moulded of black thermoplastic with a zipper closure and a soft, plush-feel liner. The ÆON case is essentially a second-generation version of the widely admired ETHER case, with improvements that include a thinner design overall, plus an internal pouch for carrying a digital audio player, plus a space for the ÆON’s signal cables.

If the foregoing description sounds promising (and it should), let me tell you in advance that it doesn’t begin to do justice to the real-world sophistication and nuance of the ÆON’s sound. Stated simply, the ÆON sounds far more accomplished than its relatively modest price might suggest, as we will discuss in a moment.

For my listening tests I used a Windows/jRiver Media Center-based music server loaded with standard and high-res PCM, DSD, and DXD audio files feeding a Questyle CMA600i DAC/amp, an RHA DACamp L1 portable DAC/amp, and the Moon Audio Dragon Inspire IHA-1 valve powered headphone amplifier. For comparison purposes I had on hand both the original MrSpeakers ETHER C headphones (with v1.1 driver upgrades) and newer generation ETHER Flow headphones, both of which have been favourably reviewed by Hi-Fi+ in issues 135 and 141 respectively.

Perhaps the first thing that captures the listeners’ ears about the ÆON is its articulate, transparent, and emotionally communicative midrange and upper midrange response. In those regions, the ÆON frankly does not sound like any sub-£800 headphone I have yet heard; instead, it sounds as if it really should be carrying a four-figure price tag. While some might rightly argue that the ETHER models do offer a smidgeon more refinement and resolution than the ÆON, I think most listeners would agree that the ÆON comes surprisingly close, which is greatly to its credit. The midrange is, realistically speaking, where most music lives and it is in this area that the ÆON’s greatest sonic strengths are revealed. 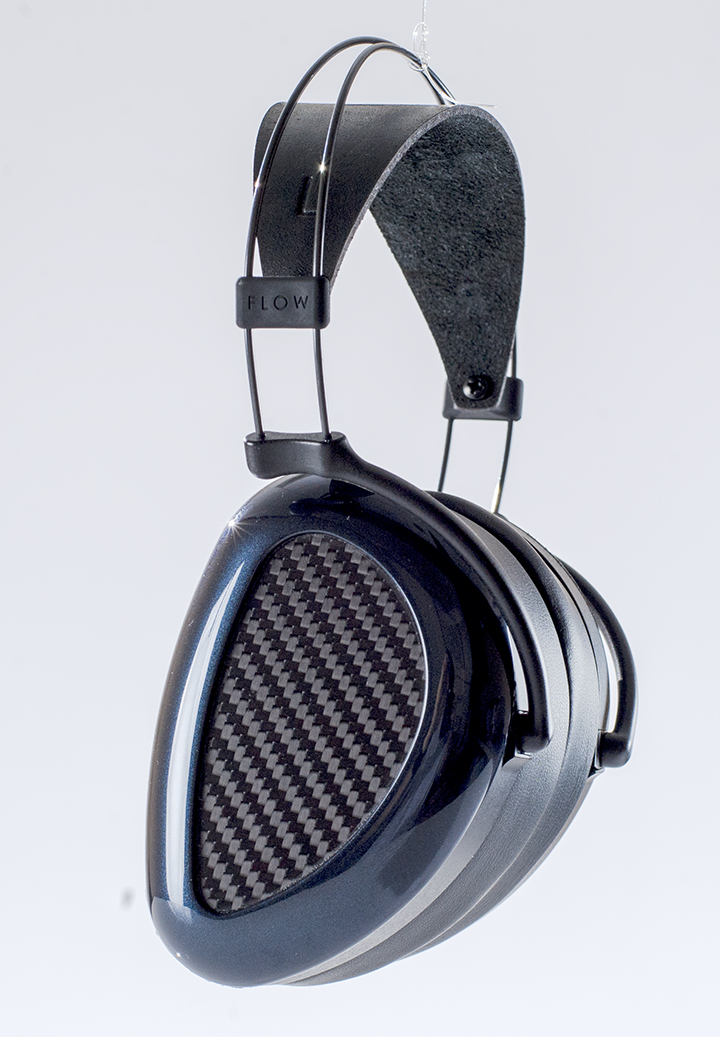 For an example, consider the track ‘I Could Eat Your Words’ from Patricia Barber’s Verse [Premonition, 16/44.1]. The track opens with an extended passage that highlights all of the deep and breathy delicacy, textural intricacy, and all-around nuance of which Barber’s voice is capable, and the ÆON does a fine job with the voice, making it a fascinating and captivating treat for the listener. There is a finesse about the ÆON’s sound, coupled with a self-assured quality that leaves the impression that one’s ears are ‘in good hands.’

But as the track unfolds, the rest of Barber’s ensemble—consisting of Michael Arnopol on bass, Neal Alger on guitar, Dave Douglas on trumpet, and Joey Baron on drums—joins in at about 1:40 into the song, adding terrific musical richness and depth. Two initial stand-out elements are Arnopol’s confident-sounding and deep-plunging acoustic bass lines, and the beautiful contrasts provided by Baron’s deft brushwork on his snare drum and cymbals. The ÆON gave a taut and beautifully controlled rendition of Arnopol’s bass, while showing admirable definition and detail on Baron’s percussion work—especially on the cymbals. But perhaps the real pièce de résistance in the track arrived in the form of Douglas’ brilliantly sultry and evocative trumpet solo—a solo that, as reproduced through the ÆON, sounded so vibrant, so rich in emotion, and so immediate that it took on a deeply moving quality of ‘reach-out-and-touch-it’ realism.

The word picture I am hoping to sketch for you is one that suggests just how refined, sophisticated, and emotionally engaging the ÆON really is. I don’t mean to say it’s a ‘perfect’ headphone or anything of the sort, but rather to assert that it offers exceedingly fine performance for its comparatively sensible price. But some will surely want to ask how the ÆON compares to MrSpeakers’ ETHER C and ETHER Flow.

I found that on ‘If I Could Eat Your Words’, the ETHER C offered a slightly but noticeably higher degree of resolution on upper midrange and treble transient and textural details, leading to a more tightly focused sound overall (although I found this performance gap could be narrowed by fitting the ÆON with high performance after-market signal cables such as Kimber’s Axios headphone cables). On the same track, the ETHER Flow offered more solidly grounded mid-bass, which was noticeable on Arnopol’s acoustic bass lines, and it also offered slightly richer and more vivid tonal colours, plus somewhat more resolution and three-dimensionality from top to bottom. Even so, I think most listeners would consider the performance gaps between the ÆON and the ETHER C or ETHER Flow to be fairly narrow ones, meaning that the ÆON offers impressive value for money, to say the least.

The MrSpeakers ÆON takes listeners very far up the ladder of high-end headphone performance and does so for a tick under £800. More importantly, it’s an affordable transducer that honours the music in all the ways that matter most. For this reason and many more, I encourage you to place the ÆON on your ‘must audition’ list. You’ll be glad you did.