In all honesty, most domestic DACs fall somewhere between ‘inadequate’ and ‘woefully inadequate’ when it comes to telling the world what they are doing. There are exceptions of course – Chord Electronics and its colour-coded control surfaces being an obvious example – but many domestic digital devices limit their interfaces to a few small LEDs denoting frequency, lock, occasionally your choice of source, and power. Sometimes, there’s not even a button to be found. The German brand RME comes from the pro-audio world. They do things differently there, and the ADI-2 series – including the ADI-2 DAC tested here – positively bristle with displays and control surfaces.

This is not the only aspect of professional audio that filters across to the general public. First, display aside, the product is that combination of solidly built and no-nonsense in approach; the power supply is an external box, and the case is solid, but not made from solid unobtanium covered in dodo leather and panda eyelids. The rear connectors aren’t cast from the purest copper known to man by dwarf-lords. And, unlike many domestic audio brands, the obsession with brand names on the circuit board is not as important as how it performs in its job. You won’t find RME crowing about using the latest chipset from the DAC brand du jour, just an impressive set of provided specifications and measurements.

The ADI-2 DAC’s no-nonsense approach extends to its inputs and outputs. It lacks some of digital audio’s alphabet soup, eschewing inputs such as AES/EBU, BNC, HDMI, I2S, RS232, and RJ45. Instead, it covers the basics with a lone USB 2.0 Type B, RCA coaxial and Toslink optical S/PDIF connectors (AES/EBU is supported if you use an adaptor on the coaxial input). For analogue, it features both single-ended RCA and balanced XLR stereo connectors, and two headphone sockets; a 3.5mm TRS minijack socket for in-ear designs, and a 6.3mm TRS jack socket for headphones. These are not ‘commoned’, but in fact reach back to two separate headphone amplifiers – a lower-gain, lower-noise design for extremely sensitive earphones and in-ear monitors, and a higher-output design for driving traditional headphones.

Then, we get to the nitty-gritty: the control surfaces. Using four push-buttons, three rotary/push knobs, and a small but colourful front-panel display. These are designed to set-up, and operate the DAC, and work in harmony with the black ABS shield-shaped remote. If you begin to wonder why a DAC needs this degree of user interaction, a quick flip through the comprehensive English/German manual quickly demonstrates the thoroughness of the RME concept. You can assign names to inputs and set the preamp to deliver different output levels for the line outputs and/or the ‘Hi-Power’ headphone output (the IEM output remains at a fixed reference -3dBu level), reference input levels. mono/stereo options, the choice of four digital filters, the ability to assign the centre dial to act as a volume or balance control, and controls for adjusting stage width, crossfeed, parametric EQ, tone, and de-emphasis.

Additionally, there’s a choice of three ‘top screens’, or the active display when the DAC is in use. The default is a basic ‘dark volume’ setting which shows a basic textual display of input, output, tone/EQ settings, sampling frequency, output type, and output volume. Volume overloads on this basic screen are clearly visible as the main volume control turns red. Other options are a State Overview, which isn’t a Presidential overview of the Union, but a display of active inputs and their bitstream content, hardware sample rate, and clock source. This is not that useful in fully stable systems, but for those of us who constantly fuss around with different devices (not always with complete success), this is something of a godsend. Finally, there is an Analyser display that shows a basic frequency plot and left-right level display of whichever output is selected. This is a band-pass filter calculation rather than a Fast Fourier Transform, akin to the metering used in a commercial recording studio. As this also gives an indication of output if either analogue outputs or the Type B USB connection are being used to record. Couple that with warning splash screens for a range of errors (including short-circuit detection), and you can see just how alluring this kind of feedback is to most users. While for domestic use, much of the reasons behind this full-on display are fit-and-forget, and of academic use, once the system is set-up, one can’t help but be deeply swayed by that degree of interaction with the RME’s control architecture, and this is echoed in that remote handset. I will admit that I questioned the need for a handset at all at first but overcame my prejudice fast and quickly found it surprisingly useful.

The utility of the RME interface does not buy the ADI-2 DAC a free pass, and it has to live up to its performance sonically as well as ergonomically. And here, notionally, there are three DACs in one to assess: ADI-2 DAC as headphone device, IEM device, and in the context of a traditional audio system. In fact, a quick drop of 3-in-1 works here, because the three different outputs are remarkably similar in tone and intent. This is somewhatdifficult to discuss in absolute terms because you are going through three separate audio pathways that can sway the performance, but the consistency of that performance shone through regardless. This is easier to check on the two headphone sockets because it’s possible to use an IEM at a low gain on the high-output connection, and a pair of headphones through the IEM output. Experimenting with all three types of output results in a headphone socket with more gain, an IEM socket with less noise, and line outputs that sound remarkably similar to the two personal audio options.

That performance, irrespective of output, is one of great detail and insight into the recording as if the RME ADI-2 DAC wants to show off its pro-audio roots once more. You can really ‘hear into a mix’, easily differentiating electronic reverb tails from natural acoustic reverberant spaces. The RME is also great at delineating instruments and voices in a complex mix; I wanted to use the Deadpool 2 OST[Sony CD] if only because it allows me to talk about the track ‘Holy Shit Balls’ legitimately. It’s a parody of typical portentous orchestral music used in movies, with a choir intoning those three words of the title over and over again, Carmina Buranastyle. Like a lot of soundtrack work, though, it’s also well recorded, and the ADI-2 DAC lets you deep dive into the music and the recording itself. The consistency of sound meant this quality of analytical insight applied to high-res PCM and native DSD, too.

The array of options does benefit the listener greatly too. They are designed to be implemented in set-up (if required) rather than applied like seasoning on a disc-by-disc basis, but they do work with the system rather than hamper it. I found the filter options more useful than the EQ (although I found EQ helped balance out the forward and bright sound of some IEMs), preferring the default Short Delay Sharp in most cases. Crossfeed, however, is genuinely fascinating, reducing the stereo width in the treble and emulating the sound of speakers in a live space. To some, it’s pointless… to others a revelation. This gives headphones a more out-of-head presentation and makes digital seem a little more like a turntable, in all the right ways. The sound takes on a depth to the image and an organic sense of physical presence that those of us firmly dunked in analogue replay will love.

Limitations are few in number. The RME is a DAC that stresses detail over rhythm, and some will choose a less forthright, more pleasingly ‘boppy’ sound. Moreover, if you want your DAC to give less than great recordings a soft-landing, look elsewhere; that resolution is always present, always a can opener into the studio… good and bad. Finally, this is not the device to tame demanding headphones with low sensitivity and impedance, as they can sometimes wind up thin and light sounding, EQ notwithstanding. 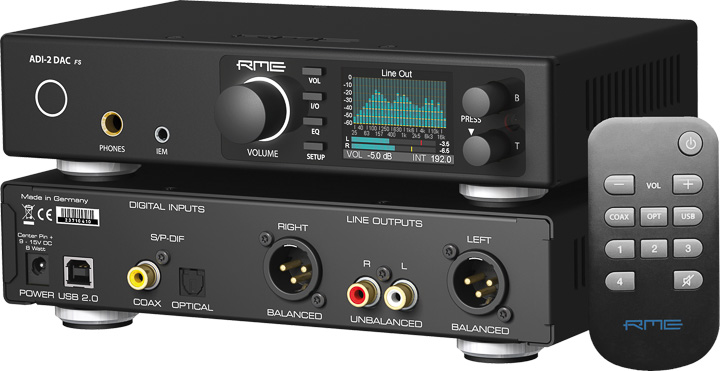 We’ve barely scratched the surface of what the RME ADI-2 DAC can do, and what it can do is extremely impressive. If you want a DAC that tells it like it is – both regarding detail retrieval and status update and analyser display – the RME ADI-2 DAC is hard to beat for the money.