As late as the middle of the last decade, the only legitimate audiophile option for the interface between loudspeaker and floor was the spike. You drove them as hard as possible into a wooden or concrete floor or sat them on protectors to prevent the spike cracking marble or tile. Your audiophile ‘cred’ was measured by how inert you could make that loudspeaker, based on the logical assumption that the only part of a speaker that should move is the transducer.

However, an equally logical assumption emerged a dozen or so years ago, that instead of trying to make the loudspeaker cabinets a rigid part of the building, we should instead attempt to somehow decouple them from their environment. Everything from springs to squash balls to ball-races was drafted into supporting roles for loudspeakers (and even audio electronics) with mixed success. The battle doesn’t exactly rage, but it still continues to this day, with some rigidly (pun intended) supporting spikes and others still pursuing the next great interface.

Some of the most consistently successful products to sit under loudspeakers in recent years are the Gaia feet from Canadian isolation specialists IsoAcoustics. These come in three different sizes for different weights of a speaker. The smallest – Gaia III – works with loudspeakers up to 32kg, the Gaia II for loudspeakers between 32kg and 54kg, and the largest Gaia I for loudspeakers up to 100kg. You get four Gaia feet and a mounting kit in each pack, so to install under a stereo pair of speakers, you will need two kits. The Gaia pack comes with a range of screw threads and is designed to replace the spikes supplied with your loudspeakers (not all speaker designers use the same M6 and M8 threads, but the IsoAcoustics website does have an online configurator and SCV a-near infinite range of free options). Just swap out the spikes, level the loudspeakers (using the two knurled collars to lock the screw at the speaker and Gaia ends, and align the logos on each Gaia either directly toward or away from the listening position. While that last might smack of audiophilia nervosa, remember that IsoAcoustics cut its isolation teeth on the ISO Series small speaker stands used to stop monitor and mixing desk interacting with one another in some of the best studios on the planet, and even the most curmudgeonly recording engineers swear by them. These are not people known for taking audiophile hocus-pocus at face value. 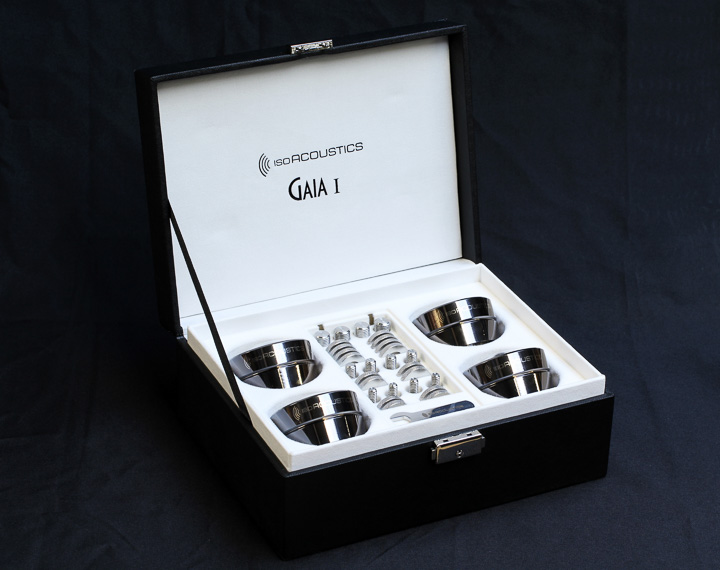 The Gaia ‘pod’ itself comprises a machined and dark-chromed stainless steel top and base section, separated internally by a secret-sauce internal elastomer structure, this prevents any resonance from the ground interacting with the loudspeaker and vice versa. There is decoupling in the vertical and horizontal planes, which is why the positioning of the Gaia logo is important: it aligns the decoupling with the plane of the drive units. Hocus-pocus status: revoked!

The internal squidgy bit in the middle of the Gaia feet means that when installed, the loudspeaker has a small amount of travel like it’s sitting on a well-damped suspension system. It doesn’t bounce like the suspension of a Linn turntable, and it doesn’t even have the freedom of movement of something like a Townshend seismic speaker platform, but if you are used to rigid speakers spiked into the floor, that slight movement might come over as disconcerting.

The Townshend platform comparison is an interesting one, not least because I have a set to hand. The two perform in an all-but identical manner in sonic terms, with deeper and tauter bass, improved midrange, greater image depth, more solidity of instruments, and improved dimensionality within a stereo soundstage. There’s a greater overall focus to the sound too, with a good sense of rhythm, and no downsides!

This is a good test for the Gaia supports because those Townshend platforms have been holding up my Wilson Duette Series 2 for almost as long as they have been in the listening room. Other supports have come and gone (the Nordost Sort Füt being the closest to unseating the Townshend), but few offered the same package of overall improvement without a compromise somewhere, even if that compromise simply meant an emptier bank account. The Gaia is the first that delivers the goods in a smaller, more manageable package, and at an attainable price.

The Gaia feet also can make the room have less of an influence over the performance of a loudspeaker. Granted, a full set of eight Gaias will not replace a need for room treatment, especially in an acoustically unfortunate room, but they will lessen the volume level at which any given room can ‘kick off’ and start to join in with the speaker, adding stray resonances and buzzes at a range of frequencies. On the one hand, the Gaia allows you to play a pair of loudspeakers louder in a room. On the other, it will enable you to play music quieter with less interference on a low level from that room: the perfect example of a win-win. 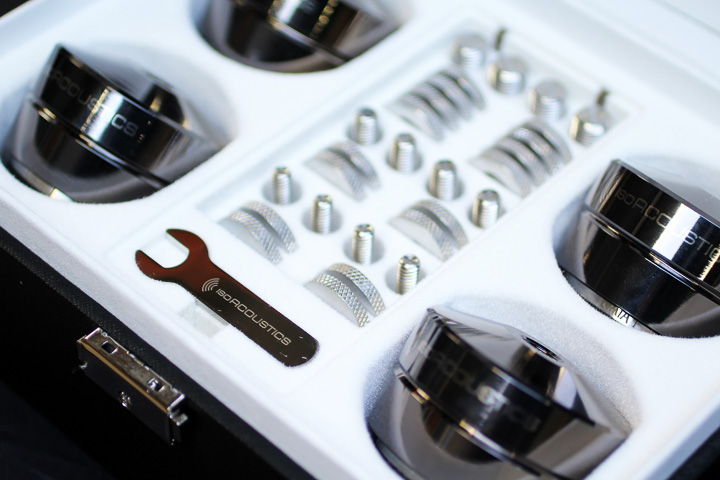 Unless spikes still speak to you so loudly that you cannot countenance any other form of support system on religious grounds, the IsoAcoustics Gaia makes a whole lot of sense. If you want to hear what your loudspeakers really sound like, put them on a set of these support feet. It’s like your loudspeakers just got a significant upgrade!