We first saw Neat’s Iota as a cute compact loudspeaker that anyone could live with and grow to love. It then became the Iota Alpha, which is a bit bigger but still diminutive, and does what it’s told. Now we have the Iota Xplorer, a rather more boisterous speaker that likes to push the boundaries of what a compact floorstander can do, and gets everyone to stay up too late. I predict that the range will continue to grow and flourish until it usurps the rest of the Neat range a bit like grey squirrels.

Bob Surgeoner’s latest creation stands 74cm above the carpet, but has large conical spikes that leave a decent gap beneath its squat cabinet; this was not an aesthetic decision but one calculated to allow for a more predictable bass response. This may look like a two-way but underneath you can see a bass driver; what you can’t see is that there’s another identical driver above it within the box creating an isobaric arrangement where one driver moves in phase with the other. In other words, you have two motor systems controlling the output which, combined with the fact that the chamber between the two drivers is sealed, means that the system ‘sees’ the overall enclosure as being twice as big as it is. Neat uses a pair of its P1-R2 bass drivers which are 170mm in diameter and have treated paper cones. The lower half of the Xplorer cabinet is a separate chamber with a port in the back but not a reflex type, Bob describes it as a “controlled leak” because it doesn’t augment the bass output in the way that a traditionally tuned reflex port does. This is apparent in practise because you can’t usually place a rear ported speaker close to the wall in the way that you can with this one. 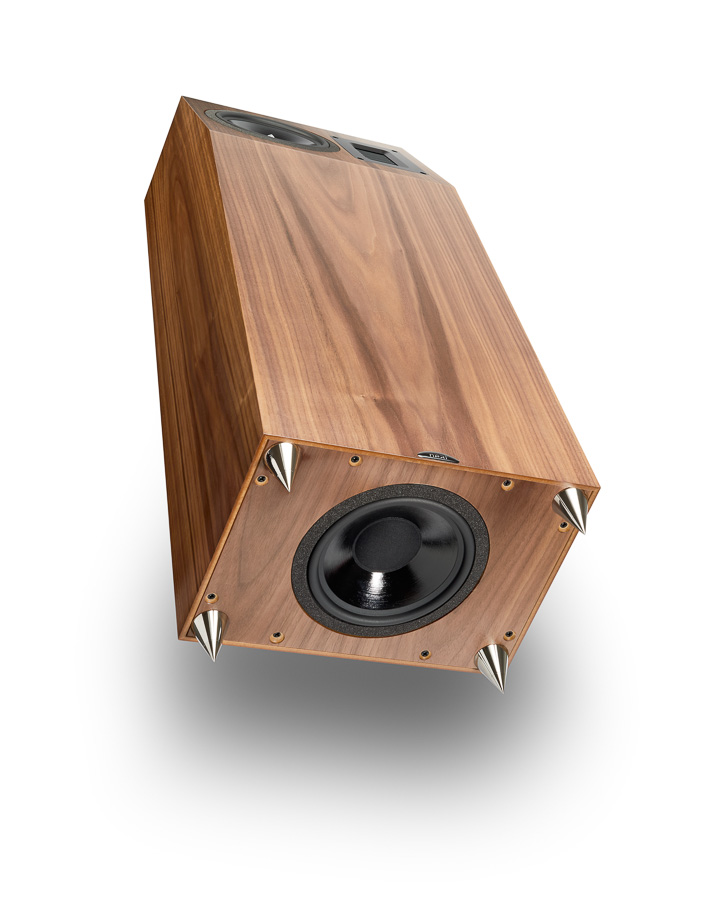 The mid and treble drivers sit in a sealed cabinet with an angled baffle that sends the sound upwards so that it can project into the room and offset its relatively compact stature. The other drivers are a  P1/R3 mid/bass – with a treated paper cone and an aluminium phase plug – and the first instance of an AMT (air motion transformer) tweeter in a Neat speaker. Bob has experimented with this type of planar tweeter in the past, but claims this example from Dayton Audio is the first he has really liked, at least in the arrangement found in the Xplorer; I wouldn’t necessarily expect them to turn up on Neat’s other ranges in the near future. This AMT is 113mm high and 68mm wide, so quite large for a treble driver.

The positioning of the tweeter on one side of the Xplorer’s baffle means that you can experiment with having it on the in- or outside of the pair, which means that the tonal balance can be adjusted to suit different rooms and personal tastes. I found that in a relatively narrow (3.5m) room having the tweeters on the outside gave the best image width without sacrificing focus. But I did struggle to get them to sound right at first. I tried a variety of positions relative to the wall, and different degrees of toe-in but something still seemed wrong, particularly in the bass. Eventually the penny dropped; I put loudspeakers on Townshend Audio Seismic stands because they ‘always’ sound better that way, but it occurred to me that with a bass driver that moves up and down rather than back and forth there might be some extent to which the bass was moving up and down at the same time. Taking them off the Townshend bases did the trick and in the process proved that however universal an accessory might seem there is always going to be an exception (to prove the rule).

I established that the Xplorers gave a good balance with a 275mm gap behind them and left a slight toe-in toward the listening position. So, I hooked up my ATC P2 power amplifier and let ZZ Top loose with the Tres Hombresalbum [Warner Bros]. This proved to be a perfect combination of speaker tech and music: timing is a particularly strong suit with this Neat so a band that’s this well ‘synched’ comes across in storming fashion – the word ‘Scorchio!’ was soon down in the notes and I had trouble switching to some less emotive material. But why change when the speaker has power and total cohesion alongside the best electric guitar sound I’ve heard in some time? The mid isn’t the sweetest on the market – Bob describes it as “explicit” – and that means when a valve guitar amp starts to scream you get the full effect. Exploring with more material, I found that this explicitness was a little too stark and changed the orientation of the Xplorers so that they were parallel to the wall, meaning that the tweeters were no longer facing me, this did the trick of smoothing their exuberance. However, if your ideal sound is akin to that of ‘chrome bumper’ Naim electronics of the 1980s, toed-in could well be the speaker position for you.

With larger works like Beethoven’s 7th [Barenboim, Beethoven For All SymphonyNo.7 in A, Op.92, Decca] the scale of the soundstage isn’t quite what you might crave. This will be room dependent of course, and mine is better damped than average, but ultimately physical speaker size does have a bearing on image size unless dispersion is particularly good. The charm and power of the piece is well presented though, and you can enjoy its ebb and flow with ease. Going back to more obviously rhythmic music feels like the loudspeaker’s natural comfort zone, and Doug MacLeod’s ‘Too Many Misses’ [Exactly Like This, Reference Recordings] comes through rather well; instrumental separation is good and the vocals project really well into the room. The full luxuriousness of this recording could perhaps be better presented, but the ‘feel’ is spot-on. There are more refined loudspeakers available at this price, but they don’t have the timing nor bass control on offer here. In fact, bass is possibly the Xplorer’s strongest suit; you can throw anything at it and the result is deep, powerful and stops and starts just when it should. Lorde’s ‘Royals’ [Pure Heroine, Universal] has some monster low end on it, which can often sound overblown and distorted, but here it’s precise and musical, with a degree of rhythmic security that can best be described as ‘tunetastic’. The emphasis is on the rhythm and melody not the sound, which means long term listening enjoyment is guaranteed. 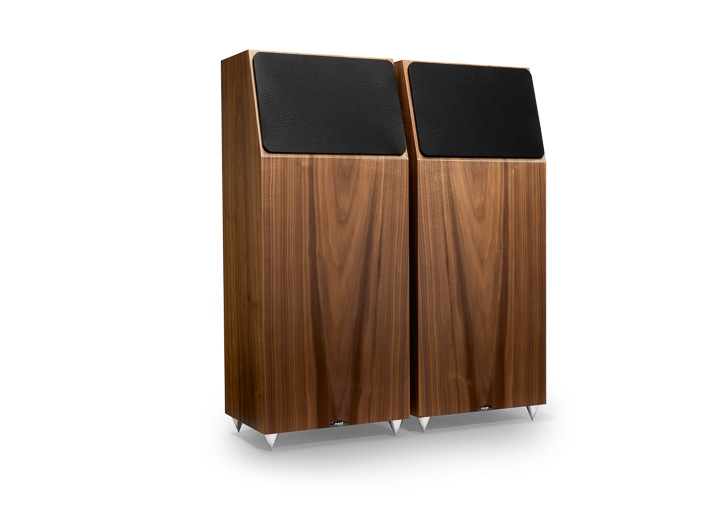 Another problematic track for speakers that try to reach down low is Terry Callier’s ‘Lazarus’[Timepiece, Verve], but the extra grip provided by two magnet systems on the bass keeps it in line, and maintains a Rega-like musicality that is highly engaging. At this point I replaced the ATC amplification with a Naim Uniti Nova streamer/amp. Neat speakers have always been popular with Naim owners and this pairing made it apparent why that might be. The sound is a little more vibrant and even more musically communicative, delivering both the welly of the epic kick drum sound of Deadmau5’s ‘Seeya’ [while(1<2), Astralwerks] with the melody of the vocal in a clean, lively fashion. Meanwhile, J.J. Cale’s ‘Call Me the Breeze’ [Naturally, Shelter] lacked height but not coherence, but the voice is placed firmly in one channel rather than centrally which may have something to do with this (the vinyl version would sound bigger and most likely better). The intense and not terribly ‘audiophile’ density of James Holden’s Animal Spirits[Border Community] proved a little difficult to penetrate, but Micheal Wollny Trio’s Wartburg[ACT] on the other hand opened up and let me hear all the gentle brushwork from the drummer and the inspired way these musicians work together.

The Iota Xplorer is a worthy step up from the popular Iota Alpha. It’s more revealing and considerably more powerful both in terms of dynamics and bass drive. It’s rare to find an almost wall-mountable loudspeaker that has this much low-end extension and control, let alone one in a box that won’t dominate its surroundings. If it’s refinement you’re after I’d look elsewhere, but if you are trying to get more ‘thrillpower’ out of your music collection and make the TV redundant, then the Iota Xplorer is more than worthy of your attention. 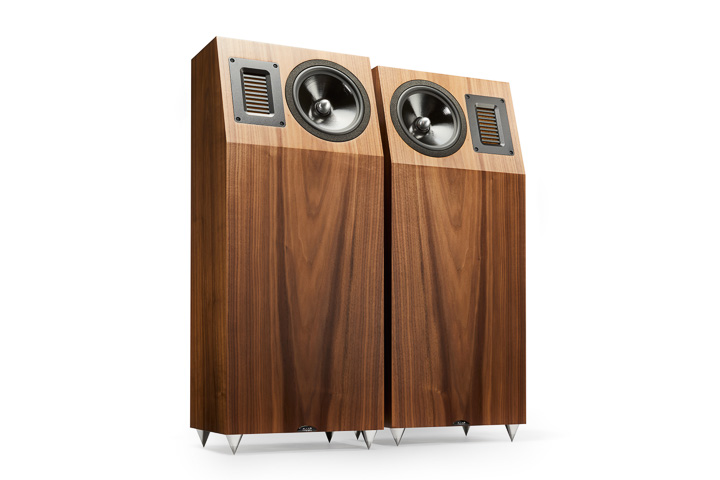