There are several ways of skinning the proverbial digital rabbit and turning it into a tasty analogue stew. The most popular one is to use a chipset from one of a small number of large-scale manufacturers; this has the advantage of low cost and relatively straightforward design, plus you also get the latest sample rates and built-in oversampling, whether you wan them or not. This approach can be found in products across the board from mobile phones to DACs costing tens of thousands of pounds. One alternative is to build a ladder DAC using discreet components in an R2R arrangement; this requires considerably more RnD and thus money but does offer greater flexibility in the design with the option to put in as much or little oversampling, filtering, etc. as the maker wants. The ladder DAC is the exclusive domain of high-end products because it’s traditionally too expensive for anything else. Moreover, the quality of the performance depends entirely on implementation. It is often assumed that ladder DACs must be better because they are made up of discrete components that can be selected for sound quality but there are plenty of examples of great sounding chip-based D/A converters on the market. There is clearly space for both approaches but it’s hard to resist the appeal of the electronic craftsmanship that goes into the hand-built approach of R2R. 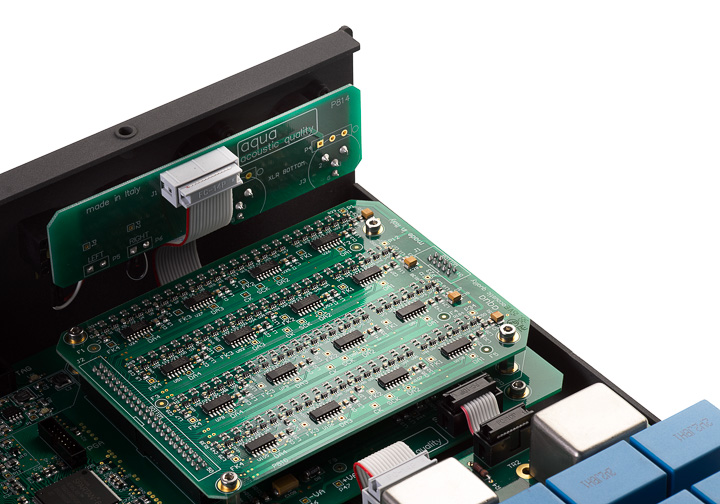 Aqua is an Italian company that favours the ladder DAC and builds a small range of converters that are chock full of circuitry; they also make a CD transport that can be linked using a proprietary I2S connection for minimum degradation between components. La Scala is in the middle of Aqua’s converter range and features the Optologic R2R ladder DAC, a custom-programmed FPGA processor galvanically and magnetically isolated by an optical interface between processor and convertor. Aqua (‘Acoustic QUAlity’) eschews oversampling and digital filtering and builds discrete power supplies for the analogue and digital sections using MOSFETs, JFETs, and high-speed diodes. It also incorporates a hybrid output stage into this converter certain parts of which are visible through the slot on the right-hand side of the facia. There you can see a pair of double triode valves that are followed by MOSFETs to provide a low impedance output from the single ended and transformer balanced connections on the back of the case.

The front of this attractive box has a bit of Italian style in its design and the minimum of controls to play with. There is, for instance, no volume control on La Scala; it provides a fixed line output in the classic style. It has input and on/off switching and the only luxury is a phase switch in the slot next to the valves. The back panel is therefore not a lot more complicated with the analogue outputs alongside S/PDIF and AES/EBU inputs and a USB connection in a Neutrik socket, although you don’t need a Neutrik termination to connect to it. There is one outsider in the form of the I2S link on an RJ45 connection, again in a Neutrik socket, which is to support the proprietary link to Aqua’s La Diva transport; it’s not clear if it can be used with anyone else’s I2S link. There’s clearly room for a bit of standardisation on this front, companies have been putting in I2S links like this for years now but because there’s no standard, there is no known I2S compatibility across brands. It’s time that someone (maybe the AES) came up with one.

The plain nature of the front panel is not terribly handy when getting started, there is no visual indication of the presence or otherwise of a signal, which can be useful with computer audio sources, for instance. And unlike some of the competition there is nothing to say what sample rate is being received; such things aren’t essential and can usually be established by other means, but they are quite nice nevertheless. That said, it’s sound quality that ultimately counts. Lights and displays can be useful (especially for the reviewer) but once a DAC is up and running you don’t need to be told what it’s doing. The only change that would be helpful is to name the inputs USB, coax, etc., rather than I, II, III, etc.  You might get to know which is which over time, but it’s not like there could be a tuner or a CD player on input I since that input will always be the I2S connection. 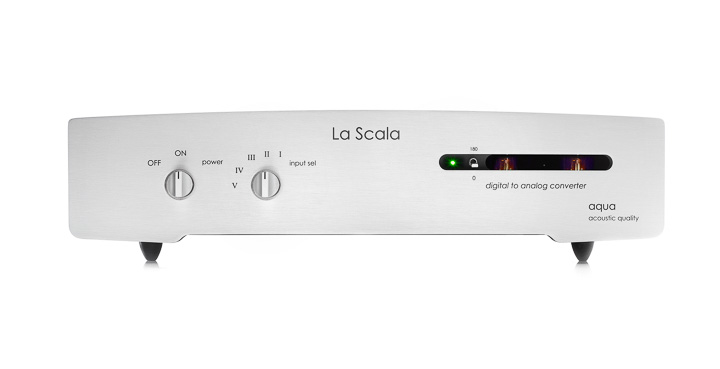 Using an Innuos Zenith SE network server as source with an Auralic G2 Aries streamer connected to the La Scala via the AES/EBU input produced a distinctly organic, relaxed, and juicy sound compared with the Chord DAVE DAC I was using up to that point. The Italian DAC has a really nice feel that is comparable with good analogue sources, revealing the interplay between musicians very nicely and creating great musicality in the process. It has almost the opposite character to the DAVE, which is precise and definite next to the organic fluency of the Aqua. Using the USB output of the server and bypassing the streamer altogether produces clearer imaging and a greater sense of integrity, so much so that I began to wonder about the quality of the balanced cable being used for the AES/EBU connection; it’s not a dedicated digital cable so it is probably compromised in that role albeit not from a musicality POV. The USB connection is tighter and more coherent, inspiring in fact, and raising the level of engagement up several notches with Esperanza Spalding’s ‘Judas’ [Emily’s D+Evolution Concorde/HD Tracks]. I had no choice but to unleash the air bass guitar at one point, suggesting that the Aqua has the power to get to the parts that other digital converters fail to reach.

It is also usefully quiet; with the more cerebral tones of Haydn it is possible to hear oodles of texture in the harmonics of original instruments while being inspired by the drama of the music. Adding the AURALiC streamer back into the system enhanced things still further; one of the oddities of digital streaming is the more hardware can often produce more musical detail. More is more. And here I got greater openness and lots of audience atmosphere on Alison Krauss + Union Station’s ‘Touch You For a While’ [Live,Rounder], as well as a very strong vocal image from the singer. The DAC shows how compression has been used to control the level of the voice on the recording while also revealing the slight vibrato she adds to achieve the power that’s being reined in. This sounds beautiful with the acoustic guitars and lively ambiance, very live despite the vagaries of the recording. Lee Morgan’s The Sidewinder (Blue Note) sounds like a live studio recording; it’s full of energy and swings like nobody’s business – and here the La Scala got everything in proportion and presented it in a soundstage with excellent depth. Even the cymbals have some shape and body, something that few digital devices can do well. It’s so quiet that you can hear new details in the track as well (I’m sure there is a voice in the background). What’s absolutely clear is the brilliance of Morgan’s trumpet playing, where the DAC brings a depth of tone that is rare and presence that makes the performance sound like it’s happening here and now.

With a coaxial S/PDIF input from the G2 Aries the result is similar – very musical with plenty of inner detail, subtlety, and space. The balance is possibly a little darker but Michael Wollny’s piano is positively radiant and the drums on his Wartburgalbum (ACT) that much more engaging.

Aqua’s La Scala is very nearly as relaxed as the CAD 1543 MkII, another non-oversampling DAC, but based on vintage multibit chips that is slightly more revealing and better in timing terms. It makes La Scala seem as though it adds a little bit of polish to proceedings, a bit more sparkle in the highs being the apparent. That said this is a very natural sounding converter with excellent transparency and a musical fluency that makes you want to close your eyes and escape into the music. It has just enough features to make it user friendly but doesn’t draw attention to itself. In fact that is its key skill; it gets out of the way to let the music through. If you give it a decent source I guarantee an experience that will be hard to switch off. 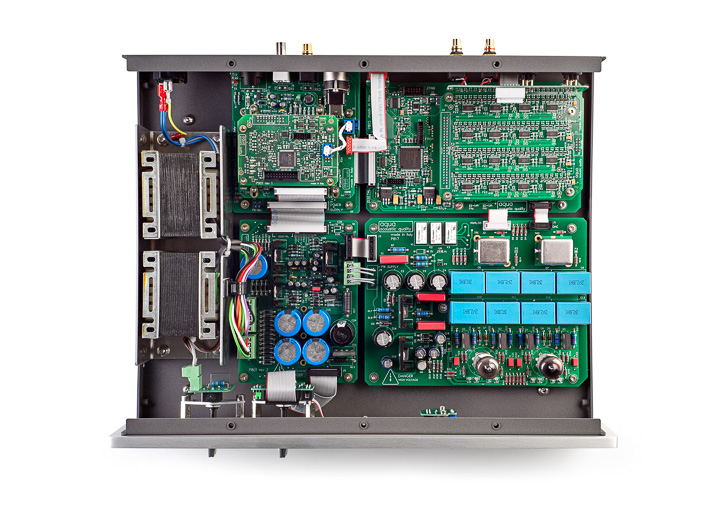 Analogue Outputs: One stereo single-ended (via RCA jacks), one balanced (via XLR connectors)