The only strange part of the operation is there is a top-mounted power switch on both the turntable and the power supply, which perform the same function. This causes some consternation when mildly ‘refreshed’ as you press one button to turn it off, press the other (because you are being the inebriated version of ‘diligent’) and it turns back on! The deck spins up from a standing start to 33 or 45 relatively quickly; not ‘direct-drive’ quickly, but also not as glacially slow as some of the very high-mass designs.

While it’s likely that many Solstice systems will go into Naim systems, I consciously wanted to place this in a wider context. Placing the front-end package into a system comprising Burmester 068 preamp and 911 power amplifier into a pair of Wilson Audio Duette 2 on Townshend platforms, eventually settling on Nordost Odin 2 cable throughout (except for the aforementioned Super Lumina) is almost as un-Naim as it gets. Would it sound good in context or is it designed simply to slot into Naim systems? Would it put a smile on my face or leave the sound cold? 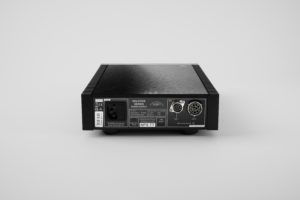 Normally such questions might take a day or so to answer, but the Naim Audio Solstice turntable responded instantly. Granted this was one of the first samples and had been thoroughly run in, but it took longer to write this sentence than it took for the Solstice to make its mark; a foot-tappin’, gormless smilin’, music lovin’ mark. Right from the moment Lana Del Ray intones “Goddamn, man child!” at the start of ‘Norman f***ing Rockwell’ [NFR, Polydor/Interscope], I knew this was going to be something special. The way the vocals had excellent presence and focus, but backed by instruments that both existed in their own vivid, visceral dimensional ‘space’ and integrated with the music as a cohesive whole is so very Naim Audio and so hard to find in wider circles.

Better yet, the more I listened to the Naim Audio Solstice turntable, the more I liked it. This coincided with one of the few heatwaves the UK gets, and that at a time of unlocking after COVID, so if ever there was a time where a record player would sit around getting minimal use, it was this. And yet, I couldn’t help myself; out came records from the back of the collection, such as Nic Jones Penguin Eggs [Tropic/Three Black Feathers]. ‘Canadee-I-O’ is a fine bit of fingerstyle acoustic guitar picking that is supremely well recorded and Jones deserves to be thought of alongside of Bert Jansch and Richard Thompson on the basis of this record.