The turntable itself is made in Germany by Clearaudio. Given that Naim’s Salisbury shop floor is given over to building electronics, retasking that production to make turntables is unnecessary and would hold up production of its electronics line. So, handing turntable production over to a company like Clearaudio effectively delivers the ideal combination of resources and specialisms to make the Solstice.

However, after almost half a century of not making turntables, Naim isn’t going to settle for an off-the-shelf design; Naim’s design input is stamped right through the Solstice from the outset and there has been a lot of prototyping and works in progress moving between Wiltshire and Bavaria. This is no mean feat given the privations of the last year and a half. This could have gone one of two ways; both companies insisting on their own ‘magic bullet’ and ending up with something that is almost, but not quite, entirely unlike ‘good’, or the two companies could work together to produce something really outstanding. As is the case here. 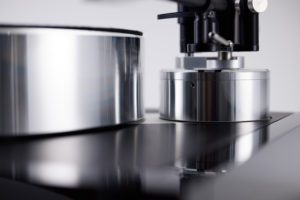 Yes, there were some cross-continent head-scratchy moments; allegedly, the magnetic bearing so beloved by Clearaudio was not as high a priority at Naim, and Clearaudio was initially sceptical of the impact of the Discrete Regulator based power supply. But in both cases, the ‘technical’ and ‘theoretical’ were resolved in the ‘practical’ of listening, even down to which side of the mat sounds best!

Of course, the part that will draw Naim aficionado’s attention most is that tonearm. And those people are already hopping from foot to foot asking three obvious questions. And the answers to those questions are ‘yes, it really is an Aro’, ‘no, it isn’t available separately’, and, ‘hopefully a new stand-alone Aro will follow’. The differences between this arm and the original Aro is that it has a proper (as in, not an after-the-event Aro-matic) lift-lower system with built-in arm rest, an on-the-fly VTA adjustment that I seriously doubt anyone will use, and a carbon-fibre arm-tube; the original would have had the same, were neatly engineered carbon-fibre widely available and even remotely affordable in the late 1980s… such is the progress of material science in the intervening decades.

There is a fourth question that would be asked by existing Aro owners, and the answer to that is ‘yes’… it has a slotted headshell; the original Aro had three small holes in the headshell, designed to fit the Linn Troika cartridge, and if your cartridge wasn’t a Troika and had a different distance between mounting holes and stylus tip, alignment was more luck than judgment. While the supplied Naim Equinox moving coil cartridge (also made by Clearaudio) has three mounting points – making alignment relatively easy and adds to rigidity of contact – should you wish to move beyond the Equinox cartridge at some point, the arm now allows greater adjustment at last.

Making a slotted headshell sounds trivial, but was in fact quite a feat of engineering, because the design of the original Aro headshell would lose some structural integrity if slotted and making a similar headshell without compromising in performance or ‘aro-ness’ would be difficult.

While the Naim Audio Solstice turntable is considered a turn-key device, that it allows future changes in cartridge would be of little benefit if the phono stage itself was locked into the parameters of the Equinox alone. Fortunately, the Solstice phono stage has a range of cartridge loading options on its back panel. This is something of a nerve-centre for the Solstice system, as the rear panel also provides options on logo brightness and standby options. It also provides options for DIN output (Naim has traditionally used locking DIN connectors over phono as a preference… even of those in the know tend to use these DIN connectors unlocked, for similar reasons to the floating connections in the company’s power cords).