It’s been 20 years since psychedelic Welsh wizards Super Furry Animals released their masterpiece – the lavish and wildly eclectic Rings Around The World, their fifth studio album, which was nominated for the 2001 Mercury Prize.

In September of last year, it was re-released to celebrate its 20th anniversary – the original album has been remastered, with extensive bonus tracks, and is available as a deluxe double 180g gatefold vinyl LP, a single CD, a 3-CD set and a digital version. 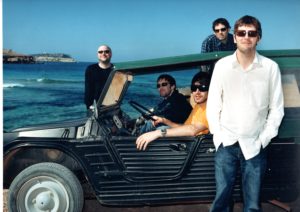 To find out some of the stories behind the making of Rings Around The World, I got keyboard player, Cian Ciaran, and bassist, Guto Pryce, on the phone.

SH: Does it feel like 20 years since Rings Around The World?

CC: It feels like another life. Our last studio album came out in 2009 – after that, we didn’t do anything for six or seven years, and then we did two years of touring and then nothing for five years. Once you have a break from that Groundhog Day routine of going into the studio, doing an album, going on the road and then having a break, it feels like a different life.

GP: It’s a weird one – it does feel like a lifetime ago. A lot’s changed.

Although a child of the 21st Century (the magazine began in 1999), the pages of hi-fi+ have remained looking very similar for at least a decade. It's time for a change. The new-look hi-fi+ is ready for the future of audio, whatever it looks like.