In 2015 the California-based firm MrSpeakers launched two world-class planar magnetic headphones: the open-back ETHER and the closed-back ETHER C (reviewed in Hi-Fi+ issue 135). Laymen and veteran headphone enthusiasts alike reacted favourably to both ETHER models and both went on to win widespread critical acclaim (in fact, Hi-Fi+ gave the ETHER C its Closed-Back Headphone of the Year award). Given the continuing ‘buzz’ surrounding the initial ETHER models, many assumed it would be a good, long while before MrSpeakers saw any need to revise these two award winning designs. “If it ain’t broke,” as the old saying goes, “don’t fix it.”

But Dan Clark, the visionary founder and President of MrSpeakers, doesn’t operate that way. Instead, Clark is driven by a burning desire to improve the sound quality of his products whenever and wherever he can—even in instances when he is attempting to enhance designs that seem not to need any improvement. What is more, Clark is also an inquisitive, imaginative, and yet pragmatic problem solving engineer who relentlessly seeks answers—sometimes by thinking ‘outside the box’. And so, barely a year after releasing the original ETHER and ETHER C headphones, MrSpeakers has now expanded its product line to include two significantly enhanced new versions of the ETHERs: the ETHER Flow and ETHER C Flow. 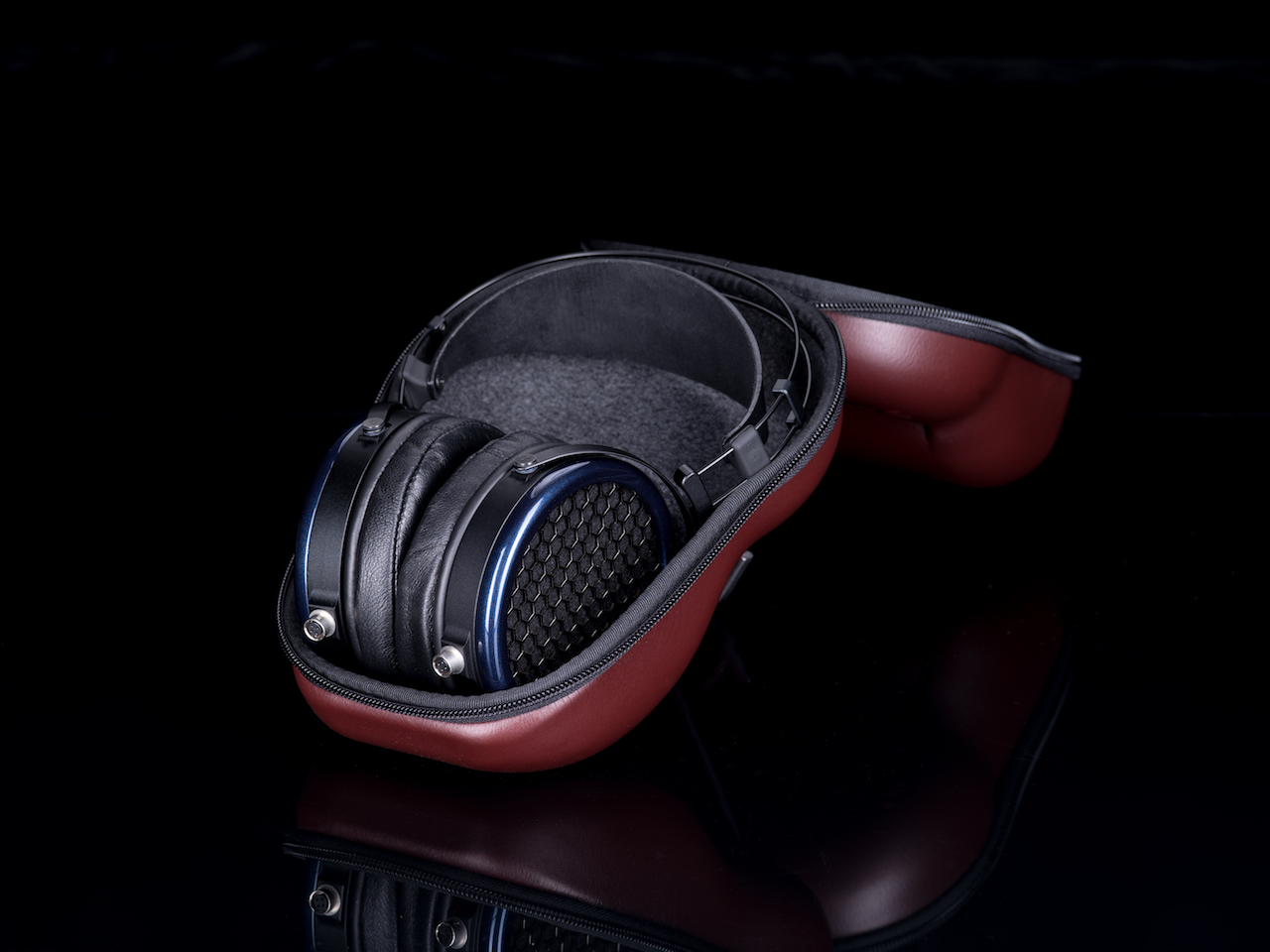 We though it would be appropriate to follow our review of the closed-back ETHER C with a review of the new open-back ETHER Flow. For now, the key points to note are that the ETHER Flow is a top-class, open-back, planar magnetic headphone that sells for £1,695 when equipped with MrSpeakers’ premium 2m DUM signal cable (DUM stands for ‘Distinctly Un-Magical’, since Clark is a no-nonsense engineer who is put off by the almost mystical performance claims made by some cable manufacturers). At this point in time, the ETHER Flow is the finest planar magnetic headphone that MrSpeakers knows how to make.

Like the original ETHER, the ETHER Flow features machined, black-anodised aluminium driver baffles, pivots, and gimbals, with a distinctive NiTinol ‘memory metal’ headband frame from which is suspended an adjustable Italian Nappa leather ‘microsuede’ headband strap. Within the baffles are suspended sets of MrSpeakers-designed 70 x 44.5mm single-ended planar magnetic drivers fitted with the firm’s proprietary V-Planar driver diaphragms (which we will discuss later on). For the sake of a good and comfortable fit, bevelled Italian Nappa lamb-leather-clad ear pads are provided. Completing the picture is a set of the firm’s DUM signal cables, which can be ordered in two lengths (2m or 3m) with the user’s choice of balanced four-pin XLR, single-ended 6.35mm phone plug, or single-ended 3.5mm mini-plug terminations. The entire headphone arrives in a felt-lined, form fitting, moulded EVA carry case that provides a neat, Velcro-closure equipped recess where signal cables can be storied when the headphones are in transit.

The original ETHER had distinctive, metallic red ear cup trim rings surrounding a honeycomb-patterned grille designed to protect the rear side of the planar magnetic drivers. The new ETHER Flow is similar in design, but features deep metallic blue trim rings, making it easy to distinguish the Flow model from the original. The ETHER Flow features aluminium ear cup baffles equipped with tiny, oblong vent holes on top. Each ear cup baffle is also fitted with a distinctive four-pin signal cable connector that matches up neatly with the four-pin, locking, quick-disconnect plugs fitted on the earphone ends of the DUM cables.

Also like the original ETHERs, the ETHER Flow features drivers employing MrSpeakers’ patented V-Planar diaphragm technology. Typical planar magnetic drivers feature flat planar diaphragms tensioned at the edges and covered with conductive traces that are positioned in close proximity to their companion magnet arrays. Musical signals passing through the traces interact with the surrounding magnetic field, causing the diaphragm to move back and forth. One problem with traditional diaphragms is that there tends to be more driver excursion toward the centre of the diaphragm and less toward the edges, which is not ideal.

To address this issue, Dan Clark collaborated with designer Bruce Thigpen of Eminent Technology fame to invent a patented, pleated (or ‘knurled’) diaphragm that addresses “nonlinear driver motion by more deeply creasing the diaphragm to increase compliance.” According to MrSpeakers, V-Planar technology enables the diaphragm “to behave as a more idealised planar surface and also improves its acceleration,” with the result that, “more of the driver surface (is) in linear motion.” In practical terms, this means the V-Planar diaphragm, “cannot only push more air at low frequencies, but with greater acceleration also delivers better dynamics, high-end frequency response, and measurably lower distortion.”

However, in the new ETHER Flow models, MrSpeakers has taken another major step forward with the introduction of what it calls TrueFlow technology. As I mentioned above, the diaphragms in planar magnetic drivers operate in very close proximity to their associated magnet arrays, essentially pumping sound waves through openings in the magnet array grid. In the past, ETHER magnet arrays featured ‘U-shaped’ metal trays or channels with powerful bar magnets fitted in the centre of the trays and with a series of circular air-relief holes drilled on either side of the magnets. Over time, Clark discovered that this magnet structure created unwanted turbulence that affected the sound waves as they passed through, creating audible distortions.

To address this problem, Clark sought to revise the ETHER magnet arrays with an eye toward reducing or eliminating turbulence. To this end, Clark first created sets of waveguides that fit into the channels in the ‘U-shaped’ trays alongside the bar magnets, which took care of turbulence problems on the front side of the array. Then, Clark created another new waveguide assembly that fits on the rear side of the ‘U-shaped’ channel, minimising turbulence problems on the rear side of the array. Together, these TrueFlow waveguides enable the diaphragm to drive sound waves through magnet arrays that now offer smooth and almost entirely turbulence-free airflow.

Does TrueFlow technology noticeably affect the sound of the ETHER Flow? In a word, yes! Like the original ETHER, the ETHER Flow is strongly clarity and detail orientated and offers neutral, but by no means astringently neutral, voicing. The ETHER Flow, like its progenitors, is a thoroughly honest-sounding headphone that is, above all, transparent to the sources with which it is used. But what the ETHER Flow brings to the party is a remarkably relaxing, wide-open, and fluid sound that appears, in myriad small but collectively important ways, to be almost completely free of even the tiniest, vestigial traces of edginess, overshoot, or low-level distortion. Moreover, TrueFlow-equipped drivers also exhibit enhanced low frequency power, definition, and transient impact.

The end result is a headphone that represents a sonic ‘Holy Grail’ of sorts: a transparent-sounding headphone that is at once extremely rich in detail and definition, and that offers superb outside-the-head imaging, yet that offers a significantly less bright-sounding, more full-bodied, more fluid, and far smoother presentation than the already excellent ETHER.

To hear these qualities in action, listen to the high-res track “Gaucho” from Steely Dan’s unforgettable album of the same name [Universal Victor, 24/96]. “Gaucho” is a gorgeous track, but it can and often does sound a bit edgy and overly ‘hot’ through many top-tier headphones. Through the ETHER Flow, though, the track’s intensely saturated tonal colours, potent bass licks, and powerful percussion elements all come shining through—vividly, to be sure, yet without edginess, glare, excess sibilant sounds, or any other sonic histrionics. The almost incendiary saxophone break in the middle of the song, for example, becomes almost unbearably beautiful through the ETHER Flow, because the headphone captures the sheer expressive power of the instrument, yet without lapsing into excess. Similarly, spatial aspects of the recording (carefully-judged touches of reverb and the like) create a deeply engaging outside-the-head listening experience, yet one that never sounds unduly artificial or overwrought. It’s in achieving this knife-edge balance between expressive power and appropriate restraint that the ETHER Flow stakes its claim as one of the finest—if not the finest—headphones that money can buy.

When I first heard MrSpeakers’ original ETHER headphones, they seemed so accomplished that I could scarcely have imagined a new ETHER-derived model would soon come along offering even higher levels of performance, but that is precisely what the ETHER Flow does. The ETHER Flow is at once a headphone that is endlessly engaging and always invigorating to hear, yet that is so smooth sounding, comfortable, and relaxing that it makes us want to listen for hours on end. It is everything that a great transducer should be.