Rockna is a Romanian company that started just before the millennium with a pair of monoblock amplifiers, but its founder Nicolae Jitariu is something of a digital wizard. Jitariu has done design work for Goldmund, PS Audio, and MSB, so it was inevitable that a Rockna DAC would eventually appear. But it took until 2013 before its first Wavequest DAC (running FPGA technology and 160 MHz asynchronous sampling) appeared. Today, Rockna makes two products; the Wavedream Net, a CD/DVD transport and network streamer that can incorporate Roon, and the subject of this review – a PCM/DSD DAC with I2S inputs alongside more familiar connections and the ability to decode up to DSD512.

The Wavedream DAC is based on R2R ladder DACs and can be purchased in single-ended form with two such converters, or with XLR outputs and two pairs of DACs to produce a genuinely balanced output. Ladder DACs are not something you find in mainstream digital equipment; they are discrete devices that are usually custom made by audio companies rather than chip manufacturers. So, if the price for the balanced version looks high, see if you can find a similarly equipped converter for less. 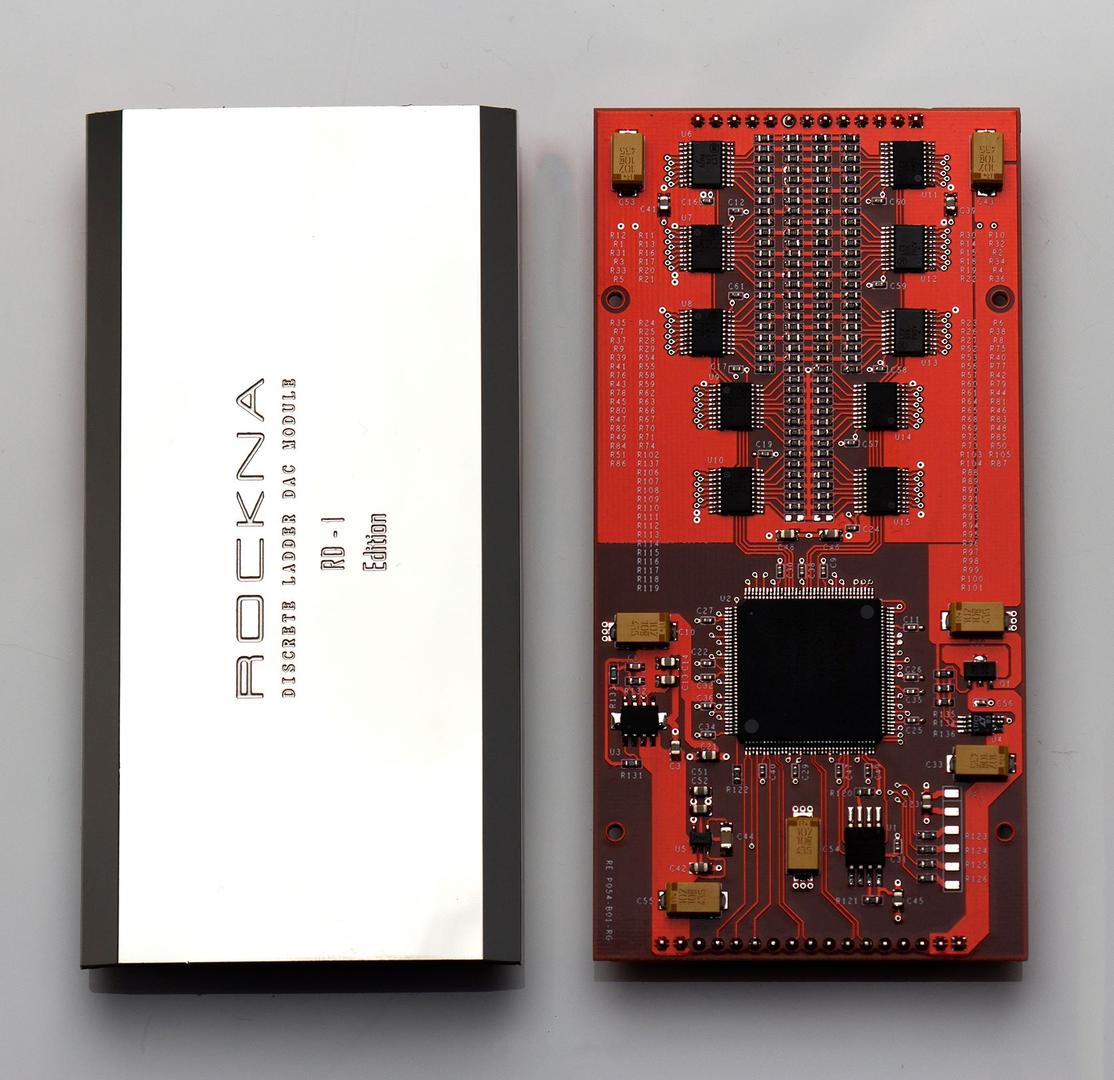 This Rockna is a substantial and flexible beast. It has a wide array of inputs on high quality socketry, including
S/PDIF via coax, AES/EBU on XLR, USB and two HD links on HDMI (a system pioneered by Jitariu). These accept an I2S input from the Wavedream Net and bypass the conversion processes required of more common digital interfaces. The only drawback with I2S for in- and outputs; it’s usually used for internal connections rather than along external digital pathways, so compatibility between different brands is not guaranteed. The yellow display on the Wavedream greets you with the sample rate of the last signal it converted alongside the input selected, volume level, and filter chosen. As mentioned, this is a flexible DAC that offers users plenty of adjustment options; as well as selecting from linear, minimum, and hybrid filters or go commando with no filtering at all. Rockna upsamples all inputs 16 times and the DAC operates at either 768kHz or 705.6kHz depending on the original signal. The output stage is a discrete design that acts as a high speed buffer and is constructed old school style with through hole components that combine J-FET and bi-polar transistors in a Class A design. This is not a me-too product in any sense of the word.

All that flexibility that makes the Rockna a slightly tricky piece of kit for the uninitiated. Most DACs have on/off and input buttons and some offer other features as well, but they don’t usually require menu-controlled set up. Here the top left button scrolls through variables like input, filter, phase, clock, dither, and volume, while the right hand buttons scroll up and down to change any of these. Once this has been grasped, it’s not long before this DAC can be prompted to produce sound if it has a suitable input attached. It is also possible to have it remember the last settings chosen with a long press of the menu button. But this is definitely an ‘RTFM’ converter. Matters are made a little easier by the supplied remote that allows inputs, etc., to be changed, but it is a somewhat generic handset meaning that you carefully have to seek out the appropriate control buttons, though things like the volume controls are obvious.

As the Wavedream was set to the linear filter at turn-on, this was the way I used it to begin with initially. It didn’t stay that way for long. It soon became apparent that timing was not a strongpoint of that filter and after a brief dalliance with ‘no filter’, which provided a degree of improvement and a more open, live sound I came to the conclusion that the so-called hybrid filter gave the best overall balance of timing, energy, imaging, and detail resolution. According to Rockna, this setting avoids the pre-ringing of linear phase and has less post ringing than minimum phase: it seems that pre-ringing is the enemy of good timing.

This the first DAC I’ve encountered that offers the option to choose between tracking the clock included with the signal and basing the clock rate on samples taken from the signal, or “freezing the output frequency” as Nicolae puts. It’s also pretty rare to see the option of disabling dither, generally considered ‘a good thing’ and not defeatable in most DACs. But this isn’t a delta-sigma DAC; it’s a multibit and they do not necessarily incorporate dither, and, it turned out, most of my listening was done without it because this feature was only activated at the last hour. In the time I had to contrast these two, the stream clock option had the upper hand, but I couldn’t detect any particular preference with dither on or off. Dither only effects very low level signals (-80dB) so notionally at least will not be audible with all material.

The Wavedream is a richly detailed, well timed, and extremely natural sounding DAC. I don’t mean it has a soft top end as can be the case with products described as ‘natural’, I just mean that there is little sense of the digital, but it is very even-handed, precise, and revealing – all characteristics of good digital. It makes more affordable converters sound crude in terms of detail rendering and this was in the single ended mode where only half of the ladder DACs are being used, my preamplifier is not balanced, so I was limited to that approach. I was, however, able to try both volume control and balanced outputs directly into an appropriately equipped power amplifier and that made a good case for the extra circuitry. The main benefit was a wider soundstage with detail extending well beyond the outside of both speakers. Timing remained good and a perceived drop in distortion encouraged higher playback levels, which means that overall you get to hear more from the recording. What brought me back to the single ended outputs was a better power amplifier and the ability to use my Townshend Allegri preamp. In truth the difference between the Wavedream’s own volume control and the Allegri wasn’t all that extreme, which is unusual, but the extra immediacy and increased resolution do combine to make you want to listen that much longer with the separate control.

Under those circumstances, the Rockna produced consistently revealing and engaging results across a wide variety of musical types, using both coax and USB inputs. It is rare for a digital component to ‘time’ well and rarer to combine this with a finely detailed sound, but that was the case here. Anthony Joseph’s Caribbean Roots album [Strut] produced instruments and voices of full of vibrancy and clarity, and it’s tight, precise groove was rendered with ease. In pretty much every instance, this DAC can separate out the instruments and voices in a piece and let you hear both the timbre and nature of what each is contributing. In Alfred Brendel’s The Complete Beethoven Sonatas [Philips] the contrast between two hands is fascinating and the way that he could play different tempos with each making the genius of the composer and player more tangible than ever. And this in the context of a tonal balance that seems entirely appropriate for the vintage of the recording. András Schiff’s more recent Beethoven – The Piano Sonatas, Vol. 7 [ECM] delivers an instrument with a lot more body and depth of image, not to mention wider dynamic range and clearer reverb, if not quite the charm of the Brendel. Such things are a matter of taste of course, but it’s nice to find a converter that delineates the differences so clearly while simultaneously allowing the musical beauty of the performances to shine through. I tried some more Beethoven on DSD, this time the Maestoso on 2L. This delivered considerable presence and gravitas from the instrument that gave it an in-the-room feel that was very convincing.

Comparing the Rockna to a couple of other fine DACs, it managed to sound almost tube powered next to a Primare DAC 30 but was not quite as effortless and natural as a CAD 1543 MkII, which given its price in SE mode is a good result. And it has considerably more flexibility of operation than either of those converters, the I2S over HDMI being the most tantalising. A trial of Wavedream Net and DAC together is something I’ll be seeking out. For now, it’s safe to say that the combination of sound, build, and features on offer from the Rockna make it a very competitive converter indeed.