Romanian personal audio experts Meze are known for making headphones. For good reason, as the excellent original 99 Classics and the no-compromise Empyrean are highly prized and extremely well-loved by personal audio enthusiasts. Now, it faces that ‘difficult third album’ phase, and the expectation (based upon the actions of most personal audio makers) would be to make a third pair of headphones, possibly somewhere between the 99 Classics and Empyrean price and performance points. Instead, Meze produced the RAI range of universal-fit in-ear monitors, encompassing the value-driven single-driver RAI Solo and – the model tested here – the RAI Penta.

The clue is in the name. If the Solo has a single driver in its elegant raw aluminium body, the Penta features five drivers in its equally elegant anodised aluminium body. The Penta is a hybrid design, too, featuring four balanced armature drivers with one dynamic driver. In effect, that means the dynamic driver does the heavy lifting, with the balanced armatures filling in key points in the upper registers. The result is either a seamless way to combine the depth and range of dynamic drivers with the frequency precision of balanced armatures, or a way to make an inconsistent-sounding earphone that manages to make the worst of both possible worlds. In truth, we’ve heard both options in the past, and the potential worry is that a company used to dealing with headphones would simply fail to bring the same skills to the in-ear world. In fact, Meze knocked the RAI Penta out of the park, as we shall see.

Before that, it’s worth looking at the whole package. Literally… the packaging is extremely good. The RAI Penta ships in a sturdy cardboard box with a charcoal-coloured stiff foam insert. It comes with one of the largest arrays of eartips I’ve seen as standard (and including extra small as well as small, medium and large softies, double flanged tips, deep insertion double flange tips and Comply tips). In all there are eight pairs of tips and if you can’t find a match after all that, consider a new hobby!

There is also a grained hard ‘pleather’ clam-shaped zip case, which ships containing the high purity silver-plated copper signal cable. This uses 20 Litz strands in a twisted quartet of wires, terminating in a pair of MMCX plugs for the earphones and a small jack for the amp. There is an adaptor for a 6.35mm jack and the all-but-forgotten two-pin in-flight adaptor. Meze also supply custom cables for balanced systems, and we opted for 2.5mm TRRS balanced jack for a DAP. Couple all this with a very rich dark shade of anodised grey with a contrasting Meze Lyre-shaped logo picked out in natural aluminium (which someone on the London Underground seemed convinced was a Warhammer faction symbol), and the RAI Penta tops the elegance charts.

In fitting, the RAI Penta does sit a little proud of the concha, but is nonetheless extremely comfortable and needs to do so because the MMCX connector and the two ports, one of which is called the Pressure Equalization System (PES). PES is drilled in a distinct, tiny Y-shaped pattern to control the airflow and hence the internal pressure around the drivers. This is flanked by three even smaller holes that act as ports for the driver sound tube/dampening system. In most earphones, these sound tubes are made entirely of plastic, but here they are machined aluminium. The whole package (this time including the electronics and the box) exudes quality and solidity of build. I’d like to say it has that kind of James Bond chic to it, but when you see some of those Bond ‘props’ up close, they don’t look as well made as the RAI Penta.

I’m going to say this now; this review contains adult themes. No, that doesn’t mean anyone is going to utter  “I’ve come to fix your heating” in a heavy Scandinavian accent, or even the rest of the review is going to be heavy on four-letter words with artistically-placed asterisks. No, the ‘adult themes’ here is just how ‘grown up’ the sound of the RAI Penta is compared to many in-ear monitor systems. Typically, when I’ve heard multiple balanced armature or hybrid dynamic/BA systems, they have invariably been detailed and exciting, but so edge of your seat, the sound teetered on brightness. And by ‘teetered’, sometimes that meant so damn bright you could use it as a head-torch! While initially impressive and good for cutting through the background noise of commuting, this brightness isn’t sustainable for long-term listening.

The RAI Penta isn’t that sort of hybrid, and instead delivers a sound that makes you hungry when you write about it; rich, warm and satisfying. Not so rich and warm and satisfying as to make a meal of things (stomach rumbling now), but enough to make you hungry (!) for more. In other, more low-calorie words, the Meze RAI Penta is perfect for whiling away the hours listening to music, and both the ergonomics and sound of the in-ear monitor do nothing to attenuate that desire.

In listening to the RAI Penta (both direct out from a computer and an AudioQuest DragonFly Cobalt and a Chord Mojo DAC, and from the balanced output of an Onkyo DAP), I realised my standard listening ways for personal audio and domestic audio were subtly – and unnecessarily – different. Most of the music used for personal audio was rock and electronica, with only token listening made on jazz, acoustic, folk or classical. I had fallen into the mindset that places personal audio on a different pedestal to domestic audio. Domestic audio plays to an older, more audiophile crowd, so it gets more audiophile music. This is wrong-headed; music is universal, and the RAI Penta plays all genres of music with similar full-bodied aplomb. It wasn’t a case of ‘goodbye deadmau5, hello Delius’ but more universal listening, where deadmau5, Delius and Miles Davis are equally celebrated. Plus, you can work through the back catalogue of all three easily, even if ‘Sofi Needs A Ladder’ by deadmau5 [4×4+12, Virgin] is never going to be the start of a long listening session regardless of system. In fact, this raucous track from deadmau5’s best years is an almost perfect musical example of material that shouldn’t suit the RAI Penta’s sound, but does: an in-ear monitor that is all about tone and retrieval of melody and timbre rather than edgy detail shouldn’t sound good when playing music that is all about edgy detail over tone. And yet, it works and works well, thanks in part to a deep, powerful, and well integrated bass.

Despite the hit with deadmau5, if you want music laid bare, this isn’t the in-ear monitor for you. On the other hand, if you like that more neutral and natural frequency response that is reminiscent of the some of the more classic two-channel audio, the lithe sound of the RAI Penta is likely much more to your tastes. The RAI Penta is an outstanding integrator, making the sound a bastion of mid-range clarity and vocal articulation, even on patter songs like ‘The Major-General’s Song’ from Gilbert & Sullivan’s The Pirates of Penzance [Decca]. This wry bit of Victorian operetta replayed with astounding staging and depth in the late 1950s is a test of just how articulate a system can be, and in the RAI Pentas lines like “I quote in elegiacs all the crimes of Heliogabalus” are distinct and easy to follow, even if few of us could repeat at the same pace. The soundstaging on this classic Decca recording is flawless, and the RAI Penta makes a good attempt at reproducing it, although there is a degree of in-head ‘lateralisation’. The staging is extremely natural and the RAI Penta delivers that kind of staging better than the more unnaturally defined, more modern ‘echo and pan’ imaging. This is especially impressive given the hybrid nature of the design, as the combination of dynamic and BAs can too readily make the image disjointed.

The more I listened to the Meze RAI Penta, the more I wanted to listen to music, which is perhaps the best praise you can make of an audio component. If there is a criticism, even that’s a positive one; it doesn’t draw attention to itself sonically, which might weigh against it next to more immediate-sounding in-ear monitors. But, in the long run, that easy, unforced accuracy, coupled with excellent bass and imaging that is more out of the head than it is inside, all add up to an in-ear monitor that’s hard to beat for the long game of listening. 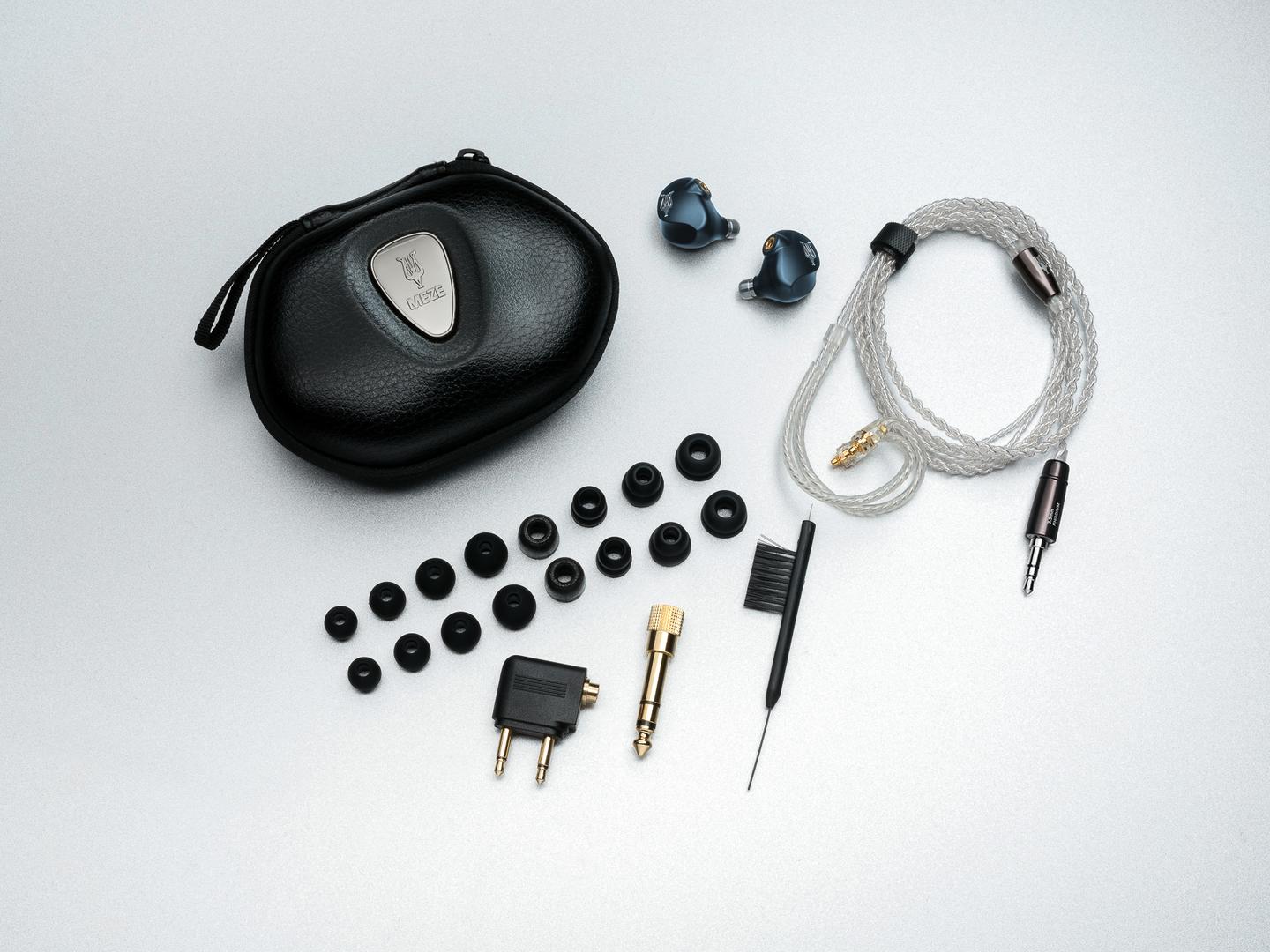 The Chord Company. A Clearway for better sound: new ClearwayX