It’s very nearly a decade since Antonio Meze founded Meze Audio in Baia Mare, Romania – and it’s safe to say that his company has prioritised quality over quantity ever since.

Just have a look at the model line-up on the company’s website and you’ll see what I mean. Meze Audio’s entire product range runs to two variations on its Model 99 over-ear headphones (the ‘Classics’ and the ‘Neo’), a properly expensive (€3k) planar magnetic ‘Empyrean’ over-ear design, and the RAI Penta five-driver in-ear monitors that Mr Editor Sircom enthused about so fulsomely in issue #181.

And now there’s a fifth Meze Audio model: the RAI Solo. At roughly a quarter of the price of the RAI Penta, the RAI Solo is the in-ear monitor with which Meze Audio intends to engage with the mainstream.

Of course, one man’s ‘mainstream’ is another’s ‘disturbingly esoteric’ – and it’s safe to say the RAI Solo may not be the in-ear monitor the mainstream (which, let’s face it, is a fairly disparate group of people at the best of times) thinks it’s waiting for. It’s not wireless, it doesn’t have any active noise-cancellation, and there’s no sign of a control app. It rather looks like the mainstream is going to have to come to Meze Audio, rather than the other way around, after all. 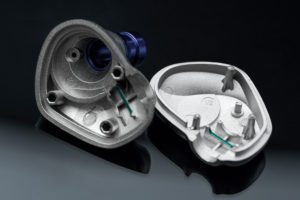 RAI Solo may have been designed to sell at a price that can reasonably confidently be described as ‘mainstream’, but that doesn’t mean Meze Audio has sacrificed any of its increasingly obvious principles. RAI Solo is a combination of some pleasantly original thinking and the sort of rigorous engineering with which Meze Audio is becoming synonymous.

The housing of RAI Solo is a two-piece injection moulded stainless steel arrangement. It’s durable, extremely low-resonance, lends itself happily to mass production and – let’s not be coy – looks pretty good in its raw, brushed state. Meze Audio has achieved an agreeably anatomic fit with the RAI Solo – so while they’re far from the most lightweight earbuds around, they prove easy to wear for hours on end. In combination with the generous selection of eartip options Meze Audio provides, the RAI Solo are among the most comfortable in-ear monitors around.

Each earbud is joined to a 1.3m silver-plated cable using micro-miniature coaxial connectors. The RAI Solo are supplied with a cable terminating in a rhodium-plated 3.5mm jack, but the cable’s detachable nature means a switch to cable terminating in either a rhodium-plated 2.5mm jack or a gold-plated 4.4mm jack is possible. It’ll cost you, mind. The cable itself is ‘tangle-resistant’ – and if ever there was a piece of overtly disingenuous marketing-speak, ‘tangle-resistant’ might well be it.