Some products are called ‘dampers’ and in use have little to do with the term. Not here. Taken separately or in combination, Kuzma’s PLATIS equipment platform and the Damper Feet are truly damping down vibration, whether that’s from the environment trying to gain access to your most sensitive audio parts or keeping the vibration of components themselves in check.

PLATIS 54 (and larger PLATIS 65) are passive isolation platforms. They feature a base frame made from solid aluminium, which is supported by adjustable damping feet. The top supporting plate is made of a hard laminate, reinforced with solid aluminium (you can also just purchase the top plate on its own). The lower plate connects with supplied damping feet, and you can effectively ‘dial in’ or fine tune the amount of damping by the number of pods relative to the weight of the product sitting on the platform. There is some wiggle room here, but typically you need enough pod-ness to account for the weight but not so much as to over-damp the system. Given that the platform can handle up to 100kg (at which point you have gone to five pods per platform) it’s an extremely flexible option. I ended up using it mostly with three pods (not in the ‘three feet good, four feet bad’ mantra of the audio woomeisters; just that using it with heavier turntables and sources – such as the Gryphon Ethos tested in issue 191 – is the correct weight-range match).

Meanwhile the Damper isolation feet can be used under any audio component without the need for platforms in order to filter structural vibrations as well as also acting as noise filter suppressors for vibrations generated by the component itself.

It’s something like a large aluminium Oreo with top and bottom cups slotting into an aluminium hoop… but it’s what’s underneath that counts. The top and bottom cups are machined from a solid aluminium plate. These cups are separated with multi layered silicone and aluminium dampers and are said to filter vibrations up to as high as 3kHz. Dampers are simply positioned under any audio component, under the metal chassis itself, spike or under rubber feet. Some personal experimentation is recommended here. 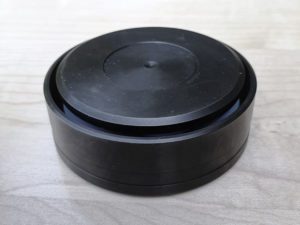 They are sold in sets of three or four, and once again choice largely comes down to weight management. Each damper can cope with a load of up to 20kg so most electronics will only need a trio of Dampers. However, if an audio component has a skewed centre of gravity (such as having a heavy transformer on one side of the case, reposition dampers accordingly and in extreme cases you might need to think about using four dampers in place of three (sonically speaking, use three and reposition unless that is absolutely impossible). There is no levelling adjustment in these Dampers, although the cup has a rubber ring inserted to minimise slipping and this can be removed.

For higher loads just add more dampers. This might seem like over-egging the pudding, but as they are intended to be used universally across audio, it’s conceivable that you might end up putting them under some 100kg or more power amps or loudspeakers, and you might conceivably end up with five or more Dampers spread evenly across the base of your product. Just remember that in most cases there’s no point in adding just one more damper for the sake of it, as their performance is so effective that could undermine the whole exercise.