Meze Audio is on the swiftest of trajectories, moving from a company that made just one set of headphones to an entire headphone audio range in just a few years. The Liric is Meze’s latest; a high-performance combination of hybrid planar magnetic drive units and closed-back design makes it a strong contender for ‘best in class’ in that most personal of personal audio; quality audio without local noise pollution. 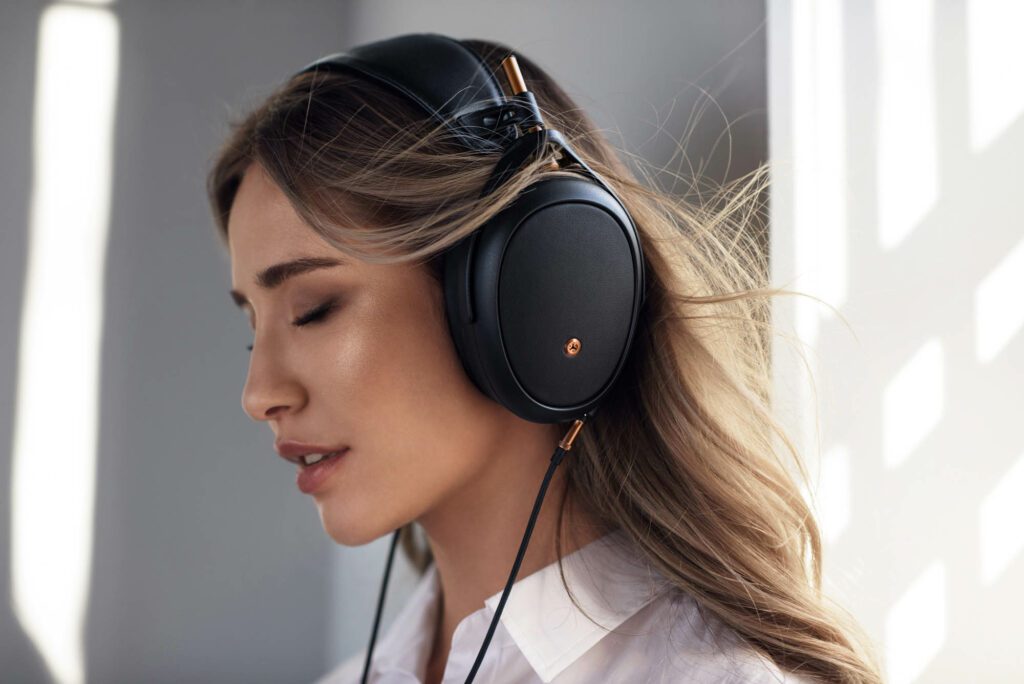 Liric faces some stiff opposition but makes a strong case for itself by its design and high-grade materials, coupled with some extremely good drive units from Rinaro Isodynamics. Meze’s success comes partly from a clever blending of design concepts, with each division knowing when not to tread on the toes of the other. Put simply, Antonio Meze of Meze does the industrial design, and Pavlo Shymanovych of Rinaro does the drive unit design. They both work around one another’s design criteria, with some meeting of minds, of course. The result is the opposite of either the ‘designer’s folly’ vanity product or the ‘designed by committee’ product that aims to do everything for everyone and does nothing well.

Liric presently sits third in line in Meze’s five-strong range of headphones, both in price and performance. This gives the Liric a slight design advantage over the Empyrean and Elite that sit above it, which means the need to make the headphone appear as expensive as its performance suggests is lessened. Those who enjoy a bit of minimalism and restraint in their ‘cans’ will find much to like in Liric’s elegant design. But, before you start to dismiss this as a ‘cheapening’ of the top models, take a chance to try a pair in the flesh; they are exceptionally well made. Antonio Meze is a perfectionist and hires like-minded people on his production line. There are no corners cut here; they are carefully machined, planished to a fine degree, anodized to sub-micron levels and are rejected if there is even the implication of a corner. I know that one of the reasons models like the Elite are so ‘spendy’ is that Meze rejects parts with a Rolls-Royce thoroughness. Same here! 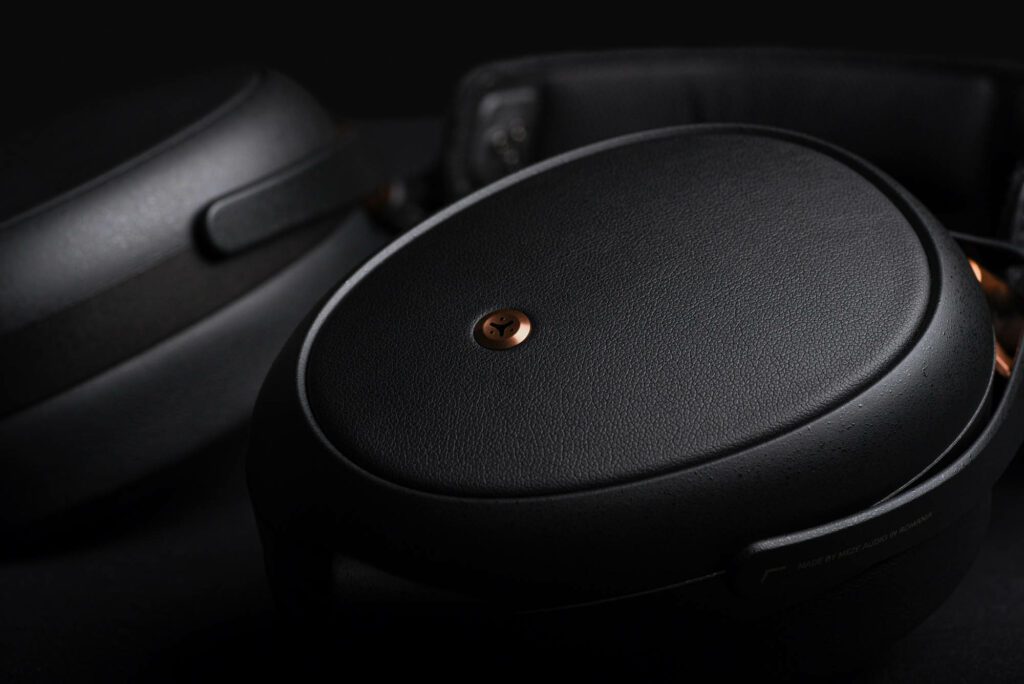 The Liric uses a magnesium earcup with a headband of steel and aluminium. This is wrapped in a hand-stitched soft leather headband pad, which does away with Meze’s signature metal external band and headband strap system. This pad scores high on the comfy rating, even higher on the ‘breathability’ scale, and looks good too. The bare metal parts of the headphone are given a lovely process that puts them somewhere close to an antique ‘rose gold’, with a just satin enough look to make them a feature without shouting. What looks like a logo set into the lower front of each ear cup is a small vent. This is more for comfort than acting as a port – think of it as an escape valve, like in a Moka pot, but without the scalding water. ‘Liric’ in an Art Nouveau font is embossed on the headband.

The Liric and its two headphone cable options come supplied in an equally elegant travel/presentation case. Its two cables terminate in a 3.5mm mini jack (an adaptor for a 6.3mm jack and the two-jack airline socket are provided), meaning you have a 1.5m cable for travel and a 3m cable for home use. Meze also provides upgrade options for balanced operation.

The star of the show

The show’s real star is the Rinaro MZ4 hybrid array driver. This 92x63mm oval isodynamic/planar magnetic driver is effectively a two-way unit in the same enclosure. The driver features a lower-mounted spiral coil for mids and highs and a ‘switchback’ bass frequency coil that looks like the most challenging race track known to man, with five hairpin bends and two 90° turns going into and out of the straight. There’s also a patent pending ‘Phase-X’ design explicitly used for the closed-back Liric, which is said to improve ambience and imaging to bring the headphone in line with open-back designs. 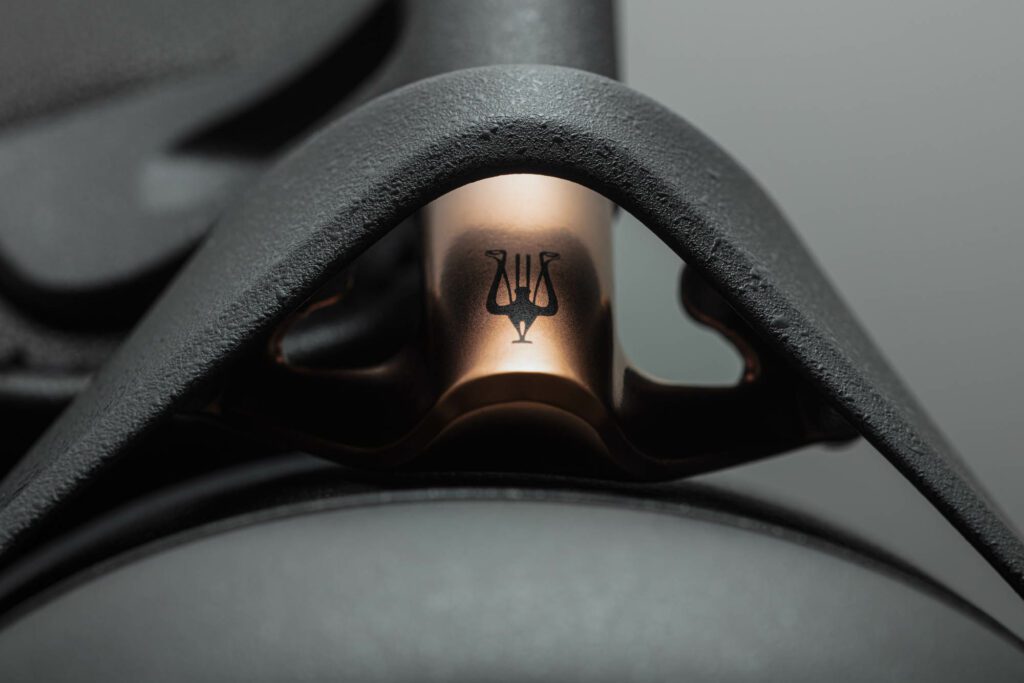 But let’s hark back to that case for a second, not only because it’s so beautifully finished with its elegant inset and gentle curves. Why focus on this? It’s a travel case and echoes the notion that the Liric is a travel headphone system. It’s certainly efficient enough to be driven by anything with a 3.5mm mini jack (it was absolutely fine when I used it with an old iPod and the output from my MacBook Pro). At 391g, it’s not a weighty headphone system, but ‘portable’ in this case is limited by the physical size of the headphones and box. This isn’t the ‘sling in your messenger bag and ride the metro’ portable; it’s ‘hotel lobby’, or ‘club-class long-haul seat-back movie’ portable. I did sling them in my messenger bag (in the case, of course) and use them… but I used them at the destination rather than on the journey.

The big thing, though, is just how good they sound. Liric manages to achieve that combination of the impressive clarity and ‘thereness’ you get from planar magnetic drive units, with the bonus of more texture and slam to the bass and the isolating effects of closed-back headphones. That’s close to a Holy Grail of listening for many; those who want the detail and expansiveness of a planar magnetic design but with some of the bass power of dynamic drivers and the ability not to have the world bleed into your listening time.

A combination of positives

Let’s not understate or dilute that impressive combination of ‘positives’. The sheer precision of that sound is beguiling. When you get a fine singer like Joyce DiDonato [Stella Di Napoli, Erato], her voice comes to life in front of you; you hear the clarity and power of that voice, coupled with the way her diaphragm moves as she sings. Were it not that I come from the ‘I can carry a tune in a bucket’ school of singing, it would be a masterclass in how to sing to that level. As it is, it is a musical performance of rare passion and energy and a fascinating exercise in biodynamics in action.

Usually, you are constrained either by environmental noise (either to your ears or from your ears to those in the same room) or by the ‘soundstage slugging’ impact of closed-back designs, but the Liric does effectively bring the best of both worlds to the game.

As you move through the repertoire of your musical collection, the same points emerge time and again; the level of detail is exceptional and extends up and down the frequency range. Sounds are clear, precise, detailed and sit in their own physical 3D ‘space’, with a bare minimum of in-head lateralisation. Music is presented close to you, but not so close that it seems the musicians are using your head as a studio. 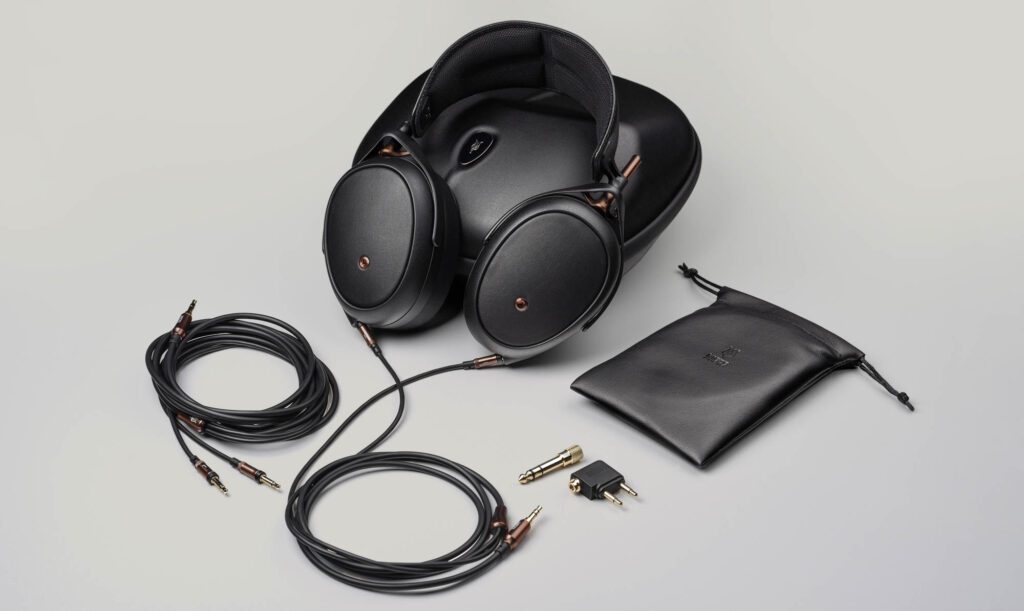 It’s also a headphone system that doesn’t have a volume ‘sweet spot’. It holds together well at low levels and high ones. The headphones are claimed to ‘top out’ at 130dB, but I’d exercise caution in using them as headbanger headphones; not only does that way lie hearing damage, but they are best pulled back from the brink. Using the Lirics without the attendant headphone amplifiers we use at this level also increases the potential for nasty amplifier distortion at high volumes. Lirics are sturdy beasts and can take the punishment far more than your ears can. However, where I liked them most was for low-level late-night listening. Sure, you can still play loud if only you are listening. Still, those reflective quiet moments rely on equally reflective, quiet music, and ‘Shhh/Peaceful’ from Miles Davis In A Silent Way [Columbia] demands to be played that way. The Lirics hang together in a manner that is hard for even conventional cone-and-dome speakers to replicate.

Moving across to my rock album of the moment, Lady In Gold by Blues Pills [Nuclear Blast Records] does highlight one of the rare trade-offs in the Liric sound; it’s powerful and dynamic, but more dynamic headphones exist. Granted, almost all of those headphones do themselves trade dynamic punch for less air and detail, but this is not a subtle recording… it’s consciously setting the clock back to the late 1960s/early 1970s hard rock. The Liric still makes a good sound here, but where it brings out the detail of the bass and drum kit, you also want it to bring out the gutsy sound. and while the Liric achieves ‘gutsy’, others are born to the task.

However, I think this is a trade-off I’d be happy to make for the most part. Few tracks fail to benefit from Liric’s ability to communicate, er, lyrically, with their extremely good detail and vocal articulation, outstanding coherence across the board, and fine soundstaging. I remain a little unconvinced by the Liric’s ‘portable’ nature (it’s more ‘transportable’ than designed for commuter use, especially as that market is now fully committed to Bluetooth and noise cancellation). Still, I am in no doubt about the Liric’s sound. Once again, Meze makes a masterpiece.