At the back of the driver is the hybrid magnet array, arranged to develop uniform activation across the whole surface of the diaphragm. At the front there’s a reinforced polymer housing. And in between sits Rinaro’s ‘Parus’ diaphragm, which somehow manages to combine an active area of 4650mm2 with an all-in weight of 0.11g – this, says Rinaro, is due to its manufacturing process, which involves stretching the polymer, at temperature, in transverse directions. This improves structural strength, stiffness and stability despite the remarkably low mass. 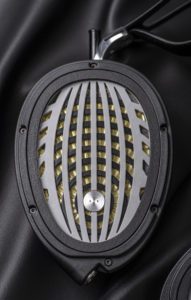 By way of an encore, Rinaro has stamped the diaphragm with a dual coil arrangement. On the upper part of the diaphragm there’s a ‘switchback’ coil, with responsibility for reproducing lower frequencies, and towards the bottom of the diaphragm there’s a spiral coil. A spiral arrangement is more adept at dealing with frequencies in the midrange and above, and its position means it’s sited more-or-less directly over the wearer’s ear canal. This, suggests Meze Audio, overcomes the tendency for the soundfield to become diffused when soundwave length is smaller than the physical depth of the inside of the ear cushion.

So with the Elite sitting comfortably in situ at one end of the chain, and attached variously to the headphone socket of a Naim Uniti Star or to an iFi iDSD Diablo being fed by an Apple MacBook Pro at the other, listening can get under way. It’s an activity best undertaken in private, mind you, because a) the Elite are quite leaky through those elaborately carved earcups, and b) it’s all too easy for bystanders to mock your appearance when the Elite are in position.

The White Stripes’ Ball and Biscuit [XL] is a recording with dirt under its fingernails, its eyes out on stalks and its heart racing uncomfortably in its chest – and when it’s delivered to the Meze Audio Elite by the iFi DAC/headphone amp, it’s absolutely unequivocal. Yes, the Elite offer an extremely impressive degree of insight, they control and integrate the frequency range with absolute authority, and they make the filthy analogue tonality sound just as ragged and overdriven as it’s supposed to… but most of all, they give the queasy head-rush levels of attack complete expression. The sheer abandon of this recording can be made obvious by far less capable headphones than these, but you’ve seldom (if at all) heard it sound quite so unhinged, quite so filled with latent threat.

The altogether more considered sound of Mountains by Prince & The Revolution [Paisley Park] is no less compelling in the Elite’s hands. Like all the best Prince songs, Mountains sounds like a high-class demo – and the Elite gives the spaces, the absences and the silences that constitute a big part of this recording full expression. The level of bite and drive they summon is deeply impressive – the steroid-assisted horn section has never sounded more clipped or austere, the vocal has never sounded more impassioned, the drag on the kick drum has never sounded so deliberate. Whatever the intentions of a recording are, it seems, the Elite have no trouble understanding them.

Some of this is down to the unforced and convincing nature of their tonality – deep, textured and straight-edged low frequencies are complemented by a deftly informative, naturalistic midrange and crisply substantial top end. Some of it concerns the amount of detail the Meze can reveal – ‘torrential’ isn’t too strong a word to describe it. Some of it will be to do with Elite’s mastery of dynamic expression – from small embouchure variations to the simple ‘loud/quiet/wildly overdriven’ dynamics of the two recordings already mentioned, the Meze Audio Elite have no problem laying it all out for your inspection. And where rhythmic positivity is concerned, the Elite are among the most accomplished headphones around – at any price. The judicious tempo and rhythm of the Prince recording is given complete expression – as far as the Meze Audio are concerned, it may as well be 1986.