Meridian has always had a reputation for thinking outside the box, dating right back to the strikingly original 104 series amps. More recently, Meridian is compatible with MQA, which in case you haven’t heard, rolls a higher bit quantity into the noise floor of an existing CD or streaming service, to get in the phrase used in the BBC spoofW1A– ‘More for less’! The other benefits of MQA, which seem particularly appealing to music producers and musicians is the notion that what the end user hears bit-wise is exactly the same as the recording engineer has signed off on. MQA was started by Meridian’s co-founder, Bob Stuart, but separated from Meridian in 2015 and runs as a distinct business entity. When the MQA light on the receiving MQA compatible DAC goes on, you know you are getting the whole truth and nothing but the truth. There are different levels of unfolding, a standard DAC can get the benefit of the first ‘unfold’, when played from a PC or Mac using the appropriate player – Audirvarna in the case of Mac. However, to release ‘the full Monty’ that MQA has to present, you will need an MQA compatible DAC.

Enter the Meridian Ultra, a £15,000 offering, fresh from the Meridian stable. On seeing this chunky black box, my son asked why the new printer, was sitting next to my valve amp! 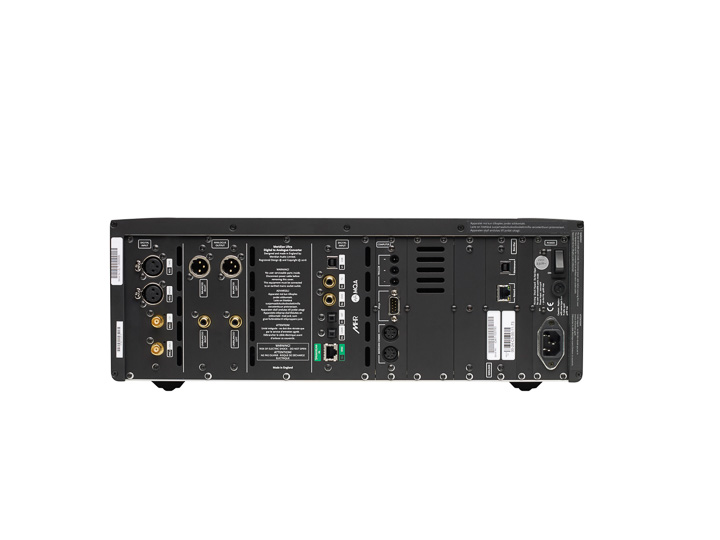 The power supply is a good old-fashioned linear affair, which normally emits less noise into the surrounding audio eco-system. The front panel has an electrically quiet static dot-matrix display, there are controls for source selection, DSP with a choice of three filters: short, with fewer stages of processing to provide the best time response thereby creating the most accurate soundstage, medium, and long, which has more filters and a steeper response while lessening some of the artefacts caused by pre-echo, said by Meridian to be more musical. The display can be altered from the front panel to show sample rates and other relevant information. An elegant and solid remote control exudes the build quality of the rest of the product, giving comprehensive control of the DAC.

My first curiosity with this particular DAC, is how it sounds when fed with a more standard source than an MQA file. This doesn’t necessarily let the DAC play to its strengths, but gives a real-world picture of its talents.

Listening with the dCS Network Bridge/USB hard disc as a source to the LSO live recording of Brahm’s Second Seranade – last movement, Bernard Haitink and the LSO, it is clear from the get-go that this is a DAC of substance and refinement. The presentation of this fabulously made recording is engaging musically, and has a timbre which is far closer to the mellow than the harsh. The sound of the orchestra is a very beautifully beguiling one, not the last word in analytical detail, but warm and rich. Chocolate cake – sachertorte, not a low-calorie healthy alternative!

The stage is well presented, with plenty of detail, but without being etched. A warm bouncy bass exudes a sense of fun in this gripping saga. Surveying the filter situation, my audio taste-buds were more drawn to the precision and slightly more natural sounds of the short filter, through which the orchestra sounded a little more lithe and real. Compared with the Chord DAVE, there is a slight understatement of the bottom octave of the double basses. 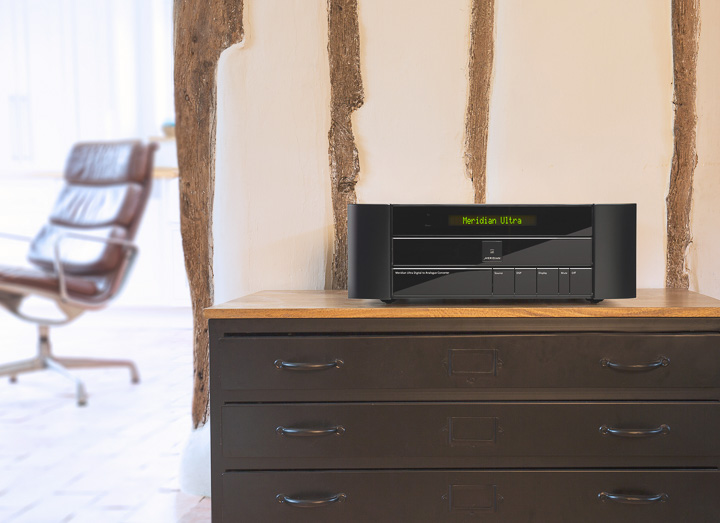 Switching to my MacBook and with the latest download of Audirvarna, as recommended by Meridian, and listening to the same track on hard disc, there is a noticeable fall in the clarity of the recording. The bass is more smudged, the soundstage narrowed, and an audio step backwards. There is a graininess to the sound which isn’t there with the dCS as a transport. Of course the dCS is a class-leading source, and by the standards of other DACs, the Ultra’s USB input is really quite good. My point is that from this example, a good transport can show a laptop a clean pair of heels.

So going back to the dCS as a transport, and listening to Tidal, I now want to see how the DAC performs when fed with MQA versus a PCM recording. Although this on the dCS app isn’t obvious, I have found two different versions of the same recording on Tidal of the Amadeus Quartet playing Schubert’s “Trout Quintet” with Emil Gilels. Having owned the LP of this which dates back to the 70’s, and having never been impressed by the recording/mastering/pressing quality, to hear this remastered is truly a revelation. The 44.1K version sounds a massive improvement over the original LP, and with MQA, there is a far greater sense of the individual instruments – separated and the quintet’s place within the hall. I can feel the presence of the back wall of the hall with MQA; without it, the instruments seem to blend to a paste!

Rather oddly, my dCS has stopped feeding Tidal in MQA through to the Ultra, and I’m unable to replicate this comparison with other recordings. I have a strong suspicion that what I’m hearing with MQA is beneficial when it comes to real acoustic recordings, done in a real space, as opposed to laid down electronically, or spatially created at a mixing desk. Hence MQA would favour classical music above other types of recordings – just a thought, and this would need a great deal more listening to ascertain with confidence.

In the coming months, dCS is going to make the Network Bridge MQA compatible; there has been a press release to this effect. I look forward to the time I can really enjoy and assess what MQA is doing, using a top quality source, and not a laptop, as I can compare MQA and non-MQA files played on a Mac, but this is in my opinion a second-best source. I can certainly hear some exciting potential from MQA, but I would find it difficult to pronounce on the basis of a laptop as a transport. I did hear a demonstration at the Windsor Show of Mahler’s 5th Symphony as an original master, and then having been MQA’d. Rather miraculously, I heard the same traits as I’d heard at home, a more chiselled sense of space, greater separation, and the sense of the hall – a clear difference – no equivocation. Quite what goes on in the later stages of the unfolding process seems to be shrouded in mystery. There are plenty of things one takes for granted – what’s inside a Coca-Cola bottle, apart from the 20 heaped spoonfuls of sugar or whatever it is. There will be those who want to understand the process, and then there are those that won’t mind the not-knowing. Personally, I’d like to know.

Anyway, this is perhaps a bit of a side-show for the current object of the review, the Meridian Ultra, which turns out to be a very well-built and executed DAC, which is on the pricier end of things, but sounds always civilised and rather beautiful to listen to. If you are looking for a super-analytical DAC that is on the cold side of presentation, then this DAC isn’t for you, but for all others it warrants serious consideration, especially with the growing potential of MQA and what it can and will do.