As makers of power products that reach from the high-value to the high-end, it would be obvious to expect IsoTek to have followed suit with its range of power cords. But, in fact, most of the brand’s power cords have been very much geared toward that value end of the market. Ascension is the first cable from IsoTek to plant its flag on terra audiophilia extremus, although such is the heady wine from that region, a £2,750 price tag for a 2m cable doesn’t seem thatextreme. I mean, you can’t even exchange it for a small car!

IsoTek are playing the purity card with Ascension. It uses a trio of 4mm2high-purity OCC (Ohno Continuous Cast) copper conductors, which are then silver-plated, and encased in a extruded FEP (Fluorinated Ethylene Propylene) with an air dielectric barrier. Each of these assemblies are then matched with FEP/air tubes to act as spacers. This is then wrapped in Mylar, shielded with a similarly high-purity oxygen-free copper braid, and given the deep cryo treatment, down to -196°C. The resultant cable is jacketed in a purple PVC outer and rated at 16A. 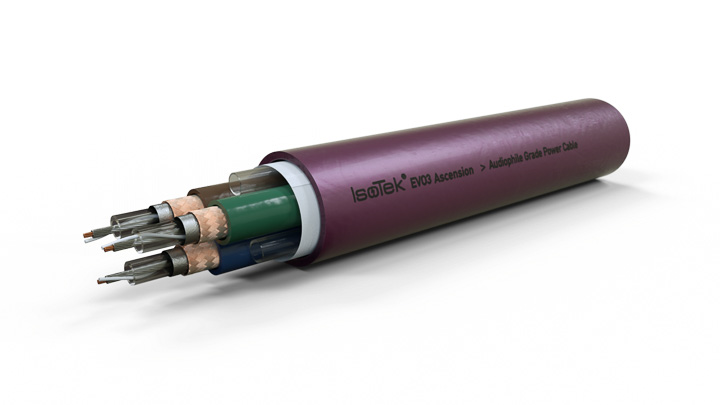 EVO3 Ascension’s outer diameter of 17.5mm does limit the kind of connectors used, and IsoTek uses high-quality bespoke devices throughout. It means that finding a two-pin figure of eight ‘Telefunken’ plug might be difficult, but you can get the cable terminated for UK, EU, US, and Australian mains sockets.

A big part of the design of the Ascension cable is what the company calls an “IsoTek VAD Barrier”. The best permittivity (dielectric constant) would be a vacuum, but that is impractical in a power cord (unless you live on a space station), so IsoTek goes for the next best thing; air, or at least as close as you can get to free air inside a cable. By creating a Virtual Air Dielectric, IsoTek claims a dielectric constant of just 1.0548 (air alone is 1.00059 in the same conditions). This is achieved by minimal conductor contact and using FEP to act as a bridge.

IsoTek’s EVO3 Ascension faces some stiff competition – literally and figuratively. Once you get past a certain price point, money almost doesn’t matter when it comes to power cords, and a £2,750 power cord might well go up against the really big guns costing £10,000 or more. So, it carries the full load of IsoTek on its back. If it fails to reach the heights of high-end audio, those audiophile enthusiasts might look less favourably upon the company’s power conditioners and filters. But similarly, it needs to represent a tangible upgrade on existing IsoTek cables for the faithful who already own a collection of IsoTek products and want the best of the best.

Ascension scales both those heights and, while it’s not an ‘Odin-killer’, it makes a lot of sense for the absolute top-end of audio performance, both in absolute and relative terms. Let’s start with the easy one. If you have one of IsoTek’s EVO3 power cords, Ascension does a lot more of the same and is the logical ultimate step in the mains lead chain. The only reasons not to buy it are that you can’t afford it or that you have a device with a two-pin Telefunken input, and if you can’t afford it… start saving!

The question is more nuanced for the ‘clean sheet’ buyer, but not by much. EVO3 Ascension brings a hush to your system like an audience preparing for a concert. It’s like the system is running a little quieter, and sounds rise from a quieter, darker background. There’s more going on in the music as a result, especially in those quicksilver microdynamic shifts in level that come with live instruments and good performances. This makes the cable a little more John Zorn than ZZ Top, but where some of the lower IsoTek orders make for a presentation that’s big on staging and sometimes not so good on drive and energy, Ascension brings both strands of musical performance together.

There is a point where Ascension scores over many of the high-end superheroes. This doesn’t overstate the treble in the way some can. A lot of high-end designs have a distinct ‘flavour’ to them, and if you like that sound, you love the cable to the exclusion of all others. Ascension is more even handed than this, in a manner akin to Cardas, but with more leading-edge attack and definition.

Our ‘systematic approach’ to audio is fairly well drummed into most Hi-Fi+writers, and the idea of using power cords from a different family to the interconnects and speaker cables is something close to apostasy. And IsoTek doesn’t make interconnects or speaker cables… it just does power. The thing is, it just does power so well that you can’t help viewing Ascension as a chink in the ‘systematic’ armour. This is a cable of balance and poise, doing all the background-noise-lowering processes we have come to expect from good aftermarket cables, but doing so without grace of favour, or exaggeration of performance. Yes, there are more exuberant sounding power cords and there are more ‘phat’ sounding power cords. There are even power cords that make for a bigger soundstage. But most of them do these things at a cost elsewhere; either elsewhere in the overall performance, or elsewhere in terms of leaving your bank balance lighter to the tune of tens of thousands. IsoTek offers the best balance in that respect.

EVO3 Ascension is not IsoTek’s first cable. Its not even the company’s first ‘real’ cable. But it is ‘born to the purple’; the first cable that will be taken really seriously by audio’s glitterati, who don’t get out of bed for less than £10,000. Highly recommended!

Distributed in the UK by: Sound Fowndations: