In the vacuum tube audio world, perhaps the most rarefied air is reserved for OTL or ‘output transformerless’) designs. As the name suggests, an OTL design directly couples the output from the tubes/valves to the transducer itself (or at least, to the crossover of the transducer in most cases), avoiding the need for a transformer.

The problem for most OTL designs is that the high output impedance of valves is not a good match for the low impedance of most loudspeakers. This meant banks of valves were required to drive most loudspeakers, and that meant lots of heat, and lots and lots of tube replacements (David Berning’s hybrid Z-OTL circuit being the exception). However, in the personal audio world, where headphone impedances are typically one or two orders of magnitude higher than most loudspeakers, many of these problems simply go away, and the OTL amplifier should be more commonplace. The reason it’s not is the design process requires more knowledge than simple copying. All of which means the Feliks Audio Euforia (made in Lubliniec, Poland) so damn remarkable.

The amplifier is a single-ended OTL design (like I said… headphone impedances make that possible), using two new old stock 6N13S/6AS7G power and a choice of 6SN7 driver tube pairs (typically, the 6SN7 of choice is the Psvane CT181-TII Gold). These are fed by a custom made toroidal power transformer and the circuit features solid-state ripple suppression and rectification, while all the internal wiring is hand-soldered Teflon-coated pure silver cable. The component roll-out is similarly high-spec, with a quality Alps volume pot, and Mundorfs and Nichicons under the hood. 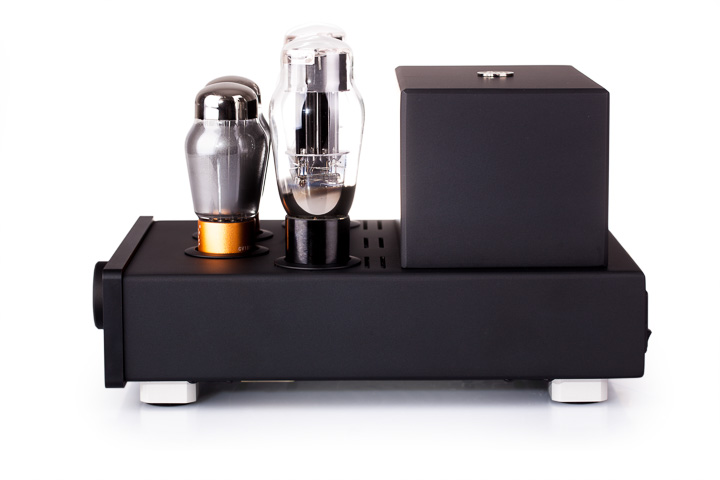 The Euforia is small, if you are used to handling valve amps… light, mostly basic in operation, and very, very well made. The ‘mostly basic’ nature of the amplifier means there is but one stereo RCA input, and a matching line output. There is a power switch next to the inlet on the rear, a central volume control, an indicator light, and a ¼” headphone jack on the front. With one exception, that’s it… no channel switching, balance, or remote control, and no provision for a valve cage: you are on your own recognizance not to burn, cut, or electrocute yourself here, so no amp juggling! It even autobiases, so there is no need for multimeters and no glowing LED indicators to dial out.

The one exception to its basic specification is a rear switch, marked like the track crossing section on a Scalextric track. This is a ‘Cross-Feed’ circuit, which deliberately injects a small amount of low-frequency crosstalk into the two channels. This sounds contra-clever, notionally making stereo imagery less accurate in the process, but in reality, what it seems to do is draw images out from their ‘lateralised’ position inside the front of the listener’s head, and is particularly well-liked both by traditional stereo listeners, and those who listen for hours at a stretch. This is not my first rodeo with cross-talk introduction, as it was briefly popular in the mid-1990s when hold-out vinyl lovers were trying to come to terms with the ‘perfect sound, forever’ of CD. By adding a small amount of low frequency crosstalk to a digital circuit, many would report a more ‘natural’ soundstage and less fatiguing listening. Feliks Audio recognises this is more to do with the listener’s preference than specific recordings, so the Cross-Feed switch is set near to the power button. Experiment, then fit and forget.

Although the Euforia comes on song inside of 15 minutes, the valves need a good 30-50 hours of playing to settle in. They run hot, too, so should you need to replace a valve, you need to give it a good 15 minutes without power for the valve to reach room temperature. As this gives time for the capacitors to discharge, this is a good idea for more than just preventing scorched fingers. However, Feliks Audio tacitly encourages a spot of tube-rolling, by giving you a list of usable substitutes. This is useful in two ways; you can play with the tonal balance to your heart’s content, and if the stock tubes blow and Feliks Audio is temporarily out of replacements, a pair of ECC32, and a pair of 6N5Ps can take the respective places of the driver and power tubes.

The Euforia is snug working with headphones with an impedance between 32Ω and 600Ω and includes a little rider in the English/Polish manual – “including planar magnetics.” Actually, what it should say is “especially planar magnetics” because the two go together brilliantly. Let me temper that… most headphones go well with the Euforia (Feliks say the Euforia is used with models like Audeze’s LCD2, BeyerDynamic’s T1, Focal’s Utopia, Sennheiser HD 800 and HD 800 S, and the ZMF Eikon), but the detail, dynamic range, and absence of background noise the Euforia brings to the table are extremely well suited to the properties inherent to planar magnetics. I used it both with my trusty-but-crusty HiFiMAN HE-500 and the Sennheiser HD 800 S (reviewed on page 14), as well as some more prosaic dynamic monitor-like/ENG designs from Audio Technica, Sennheiser, and Sony. 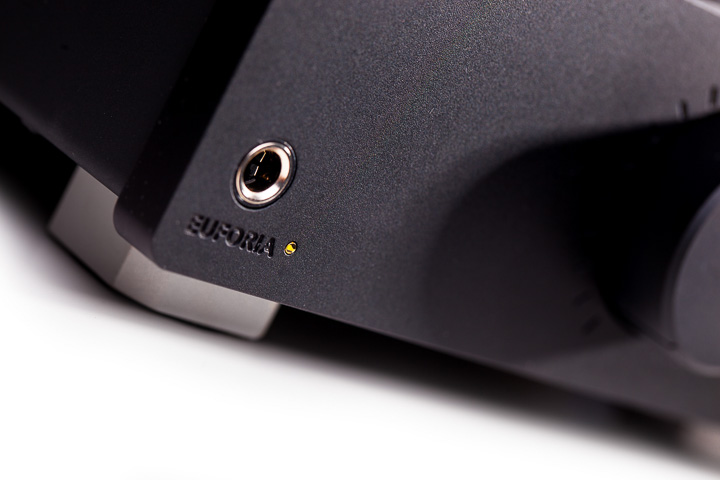 Those 50 hours pass slowly, because the Euforia gives you glimpses of what is soon to offer but coupled with a sense of veiling and dynamic limitation as the valves grow accustomed to their task in life. Then, the mists clear, and you are presented with… exactly the sound you heard when you heard good audio for the first time. It’s an ear-opening experience, with effortless dynamics, precise sounds within a focused – but not expansive – stereo soundstage (I preferred the Cross-Feed circuit in place), detailed, extended treble, deep, powerful bass, and exceptional ‘disappearing’ clarity to the midrange. Vocals in particular stand out for being just right sounding, and exceptionally articulate.

The amplifier has incredibly low colouration, with just a hint of richness and bloom at the lower end. With most of the headphones I played through the Euforia, this was only really noticeable on instruments like piano, making them sound even richer than they are in reality. On just one pair (the Audio Technica ATH-MSR7), the richness of the bass of the headphone plus the richness of the bass of the amplifier tipped the sound toward too dark a sound, but even here this balance was never less than attractive. On all other headphones I used with the Euforia, it just sounded like the real deal, just more enticing.

The Euforia exposes the lie that valve amplifiers have background noise. If anything, this amplifier is so low noise, it makes solid-state amps sound like they are laden with background hash.

A really good OTL design makes your transducers sound like they are direct-coupled to the music, and that is precisely what the Feliks Audio Euforia does to your headphones. For some, I can see that being too much of a good thing; and they will want an amplifier with more guts, more drive, more volume, and more distortion. OK, at the limits, it goes for refinement rather than edginess, and this might not be my first choice for thrashing out old Guided By Voices albums. On the other hand, the sound of the system with the Euforia in place is so sophisticated and dynamic, I might not want to put those old GBV albums on the playlist; it won’t make ‘Hardcore UFOs’ from Bee Thousand[Scat] sound awful, but the lo-fi quality of the album is not enhanced by being played with refinement. And that’s what the Euforia does so well – make music sound refined. 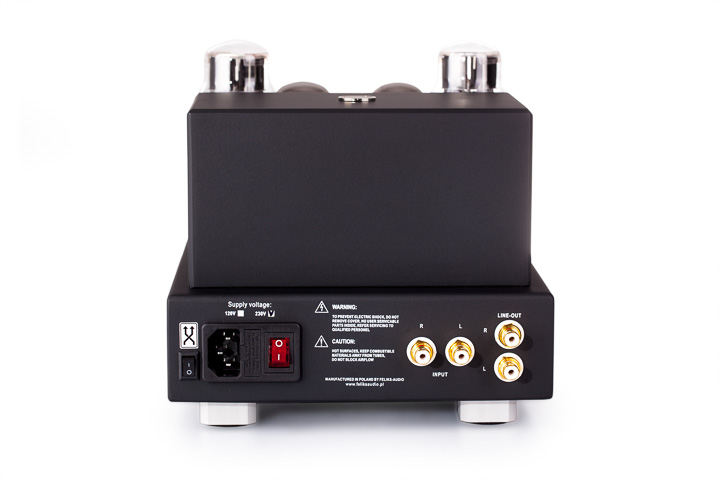 I can truly say that I’ve loved my time with the Feliks Audio Euforia. It’s not just a neutral performer with a quiet background; it’s just so damn nice to listen through. While it won’t be for those who either want their music raucous and edgy, or those who want more than just the one input, as a solid, no-nonsense headphone amplifier that sounds wonderful and just happens to sport a few valves, it’s hard to think of better at the price, or even double the price. Music sounds honest through this amplifier; even when that music is sharp-edged, the Euforia does its level best to make that sound good. Heartily recommended!