Every now and then, we get a product that claims to be international in outlook, which normally means it’s designed in one part of the world, and built in another. The Viotti One from Markaudio-Sota is different and lives up to the international claim. It’s designed by two Englishman (one living in Hong Kong), using Japanese drive unit technology, with an Italian industrial designer for the visuals, and Asian build and backing. That design process has so many air miles Markaudio-Sota should fly everywhere club class!

The Viotti One is an elegant, two-driver standmount loudspeaker, designed to work on its own matching stand. It is front-ported and single-wired, with a boat-backed design design whose sides stand slightly proud of the front plate, which itself extends to the top-plate. The five-way binding posts are a pain to use if you use spade lugs. The speaker is available in four finishes.

The bluff description of the basic parameters of the loudspeaker is there for a reason. It’s not a normal loudspeaker by any description. Even the design process is atypical: Englishman #1 (Mark Fenlon) comes up with the basic concept for a loudspeaker, unbound by commerical or financial constraints, from his Hong Kong base (the ‘Markaudio’ bit). He then looks to Japanese speaker maker Sota to create the right drive units to fit the part. Englishman #1 approaches Englishman #2 (Dr Scott Lindgren) to design the crossover and tune the port, again with performance rather than bottom line in mind. The company then approaches Italian designer Andrea Ponti to come up with the looks. Finally, prototypes are shipped around the world for listening tests. The Markaudio-Sota Viotti One is the result, broadly following the Field of Dreams rule (“if you build it, they will come”). For a small company, ‘follow your dreams’ is often going to create better products than ‘follow the money’, because larger speaker multinationals already do that, and will do it better than the little guy.

The Sota connection is two high-grade, aluminium cone drive units designed specifically for the task: the Sota 5 wide-range ‘tweeter’ and the Sota 11 wide-range ‘mid-bass’. The quotes around the terms are there because although they act as tweeter and mid-bass drivers thanks to the crossover, the drivers are both wide-range designs and share the same cone profile. You could put the Sota 5 into a small box and run it as a tiny, crossoverless, full-range unit (the company’s Tozzi loudspeakers do just that). The crossover network on each drive unit is simple, high quality, low order, and gentle. Space does not permit describing the nuance between ‘wide’ and ‘full’ range drive units (like those of the late Ted Jordan), but the Markaudio-Sota people think their full-range drivers introduce more problems than they resolve.

The Sota loudspeakers take some time to bed in – dozens of hours rather than months on end – but the speakers don’t tend to sound shut in during the warm up process. And, although they are best used without large amounts of motive force from the amplifier in their early outings, they simply start hanging together more over extended hours of playing.

A big feather in the Viotti One’s cap is its wide dispersion, for three good reasons. First, it makes the speaker easy to install. Next, it makes the soundstage good for more than just the ‘sweet spot’ listener, and third, it’s perfect for those difficult small, solid rooms in which we British listen. This is the perfect loudspeaker for people listening in rooms less than 4m wide, and less than 5m long; in other words, all those listeners in suburban houses on the outskirts of big cities, where space comes at a costly premium.

If you are expecting something like the conventional sound of a two-way, cone-and-dome standmount – or you are expecting the sound of full-range single drivers or even dual concentrics –  you are in for a surprise. The Viotti One ‘mostly’ doesn’t sound like that. Yes, it has the excellent dispersion properties of dual concentrics and the like, meaning the imaging is very much a ‘sit anywhere’ soundstage, and the need for careful installation and toe-in is reduced. But similarities end there. 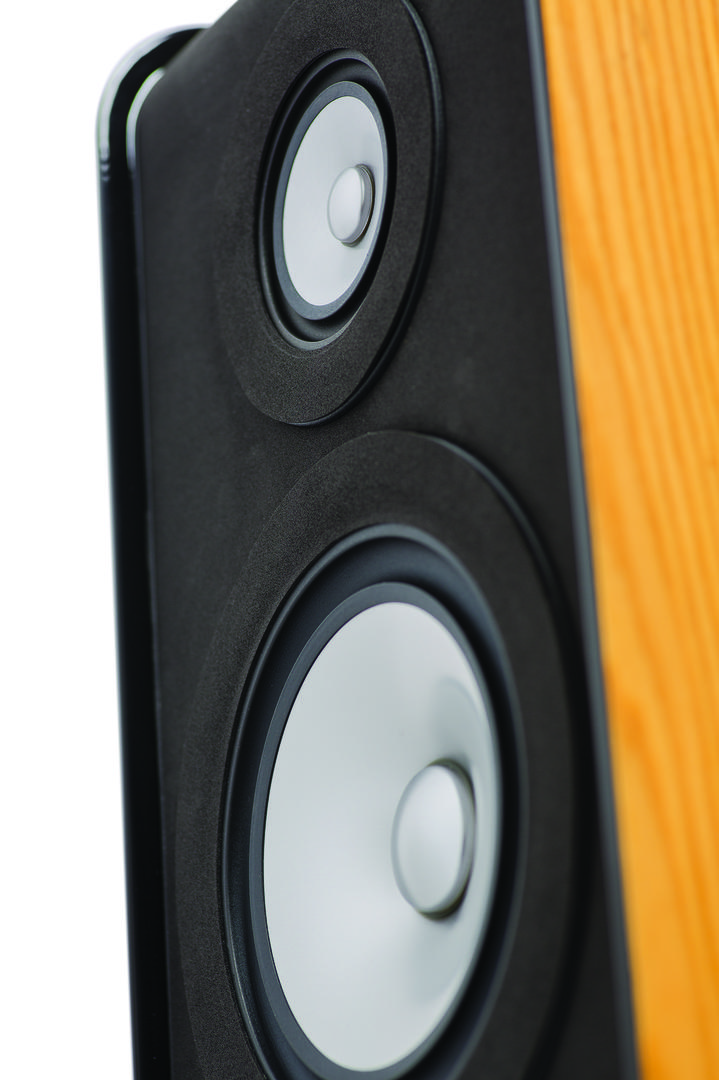 The Viotti One – defined through conventional loudspeaker terms – is like an electrostatic meets a dynamic design, and not in the style of a MartinLogan hybrid. Instead, it simultultaneously combines the ultimate transparency of an electrostatic with the more ‘meaty’ sense of driving force of a dynamic right across the board. Ultimately, on balance this is perhaps more dynamic than electrostatic, because there remains a cabinet adding a touch of resonance, but the sort of ‘phase purity’ across the frequency range that the Viotti One brings is very electrostatic-like and beguiling.

This loudspeaker has an inherent linearity and intelligibility of voice, tone, and timbre that works from the midrange out. Listening to ‘Memphis Soul Stew’ from King Curtis Live at Filmore West [ATCO], the sense of this being a live recording is perfectly recreated, and that integrity shines through. There is a distinct tonal balance to the Viotti One, however; the guitar playing of Cornell Dupree perfectly matches the Viotti One’s character, and consequently his Fender Telecaster guitar through a Fender Twin Reverb amp is more insistent and ever-present in the mix. This Telecaster sound is more Telecaster-y than you will hear through most loudspeakers, and Dupree’s clean, in-the-pocket chops cut through the mix. However, they do so at the expense of being able to follow Jerry Jemmott’s storming bass line or Bernard Purdie’s lively, powerful drumming. They are still there, still impressive, but it’s as if they are pushed back in the mix slightly.

The same applied almost universally. ‘The Lover of Beiruit’ from The Astounding Eyes of Rita by Anouar Brahem [ECM] produced this incredibly atmospheric, almost delicate depiction of Oud and bass clarinet, to the point where other loudspeakers sound almost distorted by comparison, and Björn Meyer’s bass and Khaled Yassine’s bendir playing (a hand frame drum, similar to an Irish bodhrán, but played without a beater) were more to the back of the mix.

This take on music does create an ‘interesting’ interpretation of reggae or dub. Vocals, guitar parts, cymbals, and percussion on Steel Pulse’s outstanding Handsworth Revolution album [Island] all have remarkable fluency and fluidity, but the all-important bass line is more a distant echo than a forceful underpinning.

Rather than sounding like an incomplete loudspeaker, though, what the Viotti One does (for some people, at least) is ask a difficult question – are loudspeakers focused on the wrong things in music? Certainly the sound of Brahem’s Oud playing made more ‘sense’ than it can do through some far more expensive, yet more conventional designs, making the typical ‘cone and dome’ box sound more contrived, and slow.  This is about delivering the atmosphere and subtlety of tone within music, and that seems to interpret melody and harmony with an effortless ease. 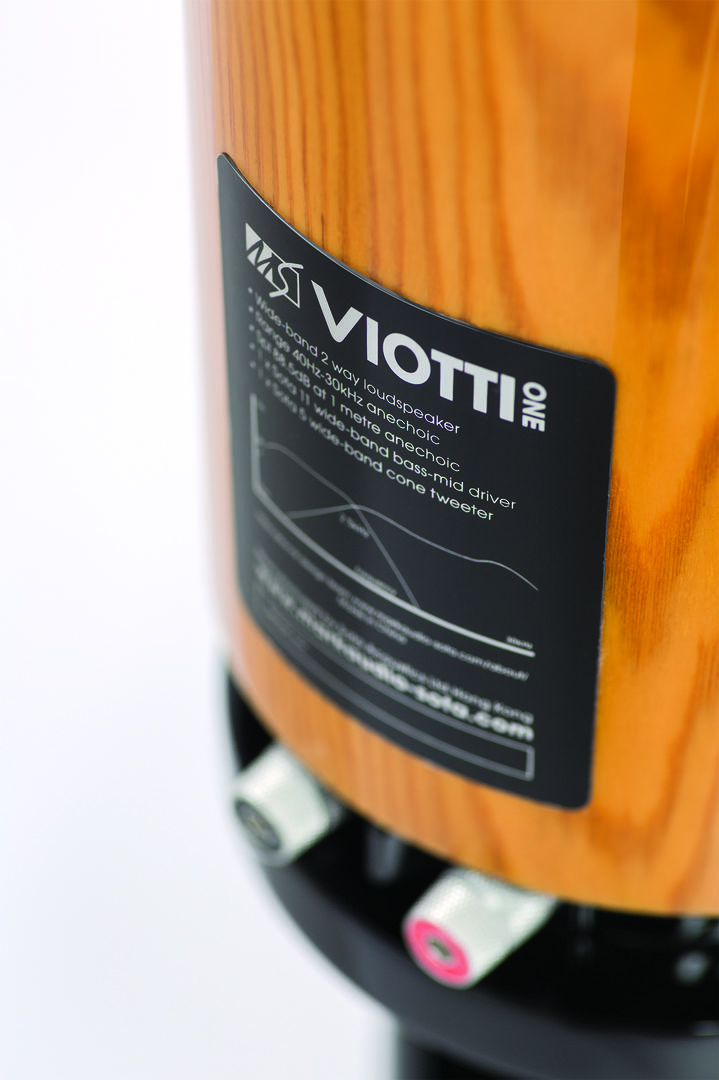 I like these loudspeakers, even though they aren’t for everyone. In fact, I think I like these loudspeakers because they aren’t for everyone. An increasing amount of audio represents ‘me-too-ism’, with every company making uniform products that do the same thing and sound almost identical because they use the same parts, the same design programs, and the same marketing strategies. The Viotti One didn’t come out of a strategy meeting citing a need to fill a gap in the market, it isn’t a range-filler, and it isn’t a stretched or shrunk version of a popular model. The Markaudio-Sota Viotti One is a work of passion in a market that has become increasingly passionless, and that’s a good thing. Not everyone will share the same passion – that’s the price a company pays for not going for the ‘me-too’ option – but those who like what the Viotti One does will not find it its equal in audio.

Distributed in the UK by: Dr Scott Lindgren