Linn has famously made its products as open-source as possible (which might explain why the closed-loop of MQA remains anathema to Linn). Meaning that while you are strongly encouraged to use the Klimax DSM with the Linn App to control it, Linn Kazoo to select, search, and play your music, Linn Kazoo Server to store that music and Linn Konfig to set-up and manage your system, you could forge your own path… ish. I’d say trying to set-up a Linn Klimax DSM without using Linn Konfig is a bit like trying to sew on a button with a hammer, and I would also say that unless you have a pathological dislike of using Linn’s own software, use the damn programs. That being said, I’d like to see the Linn App speak to Android phones and tablets, and I hope Kazoo Media can one-day work with Apple M1-chip computers and more than just QNAP NAS drives. Fortunately, my older Mac Book Pro is still serviceable and was pressed into service as a server. Although ‘Roon Tested’ rather than ‘Roon Ready,’ Linn and Roon work well together.

Linn’s streamers have a characteristic sound that still holds here. It’s dry… like a good martini, not a desert. That gives the music a sense of directness and focus, but can trade speed for space, creating a tight ball of sound that sits between the loudspeakers. In the Klimax, however, you get both that precision of speed and good spatial properties, without sacrificing the ‘… like a good martini’ part. No extra padding, no euphonic ‘niceness’ or anything like that is added to the sound, because it’s not needed to be added to the sound. Who needs ‘padding’ when you’ve got ‘direct’? 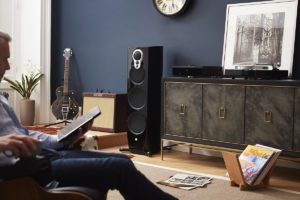 That directness has always been a strong Linn streamer suit, but it takes on powerful proportions here. I played one of the more challenging classical pieces I’ve heard in years; Orange by Caroline Shaw and the Attacca Quartet [New Am/Nonesuch]. The composition is inspired by gardening, and while some parts are beautiful and refined, others are dense, woody and wild. Often, it sounds like no garden you’d want to be in, but here the whole performance sounds more contiguous and whole. Yes it has the same dynamic range and can get more than a little screechy, but you do get the sense of someone trying to make music more synesthetic and include colour, smell and the physical aspects of the outside world. It’s oddly relaxing inside an album that often gets turned off after about a minute for sounding too much like a string quartet pretending to be seagulls. That’s not to say the Linn is laidback or the sound is polite; when called on, the angular sound of this recording is harsh and powerful, but the Linn gets beyond that surface sound to make something far more musically interesting, and places you at the heart of the music in a way I’ve not heard before from the album. It’s truly inspiring.

A reviewer’s job is to trip products up, but the best products trip us up instead. When this happens, we play music that we think will show limitations in a device, and they end up highlighting their strengths instead. So it was with the Klimax DSM; I played the Overture to The Pirates of Penzance [D’Oyly Carte, Decca] which is a great test for imaging, but ended up being so musically bouncy and fun (as it should be) I felt like I should have mutton-chops and be wearing a smoking jacket. I played ‘Back In Black’ by AC/DC [Atlantic] on Tidal and air-guitared my way to dislocating a shoulder and I played some Miles Davis to check on that complex interplay on Shhh/Peaceful [In A Silent Way, Columbia] and now I have a $1,000 per day coke habit. And that’s the big thing about the Linn Klimax DSM; you feel rolling out the same old terms for audio performance when you are dealing with a product that is so very much about the music isn’t just wrong, it’s positively asinine. Of course, it ticks all the audiophile boxes of good soundstaging, outstanding levels of detail, excellent vocal articulation, superb image solidity and dynamic range and fluidity of sound that could give a turntable a run for its money, but that’s just par for the course in high-end streaming. What this gives over and above that is a sense of being as one with the musical intentions of the composer or musicians.