The changes are big. First, V5 Aquarius now incorporates two thermomagnetic fuses, one rated at 16A for the two high-current power output sockets, the second rated at 6A for the four remaining medium-current output sockets. A standard fuse – by virtue of its electrical function – relies on a very thin piece of wire to overheat and break contact; this is just as true of expensive audiophile grade fuses. The IsoTek thermomagnetic fuse system offers an increased contact area at least 1,000 times greater than that of a standard fuse, and a connection which is consistently strong. It is a substantial upgrade, which also makes re-setting the device easy.

The V5 Aquarius’ PCB topology has also been significantly upgraded, with PCB copper loading said to be increased by over 35% to improve amperage and decrease resistance. Critical bespoke components also have better overall tolerances with improved inductance and current handling. As a result, the new circuit is said to offer twice the inductance with a claimed 40% increase in current.

Dramatically improved DCR (direct current resistance) has been also applied throughout the design. IsoTek’s key goal is to reduce DCR, bringing performance closer to the zero Ohms idea, V5 Aquarius is claimed to improve performance by 25% in comparison to its predecessor. 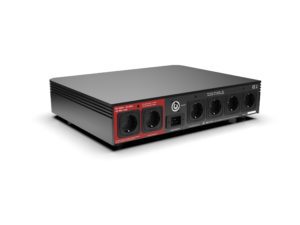 These technological improvements result in the V5 Aquarius delivering greater power, with unrestricted current delivery within what the power company can supply, and regulations allow. Generally, for power amplifiers or high wattage electronics, IsoTek provides outputs that offers extremely low impedance and low DCR, which completely eliminates (within the concepts of power filtering) any possibility of current restriction and enhances dynamic range. By way of contrast, when power is contaminated, dynamic range is reduced.

The limit, of course, is the mains supply. The very principle of AC power is that it doesn’t store energy in the transmission system. As a consequence, a power reserve within an AC circuit does not and cannot exist.

Power reserve would require the voltage to increase as Ohm’s law insists it must, so saying a circuit doesn’t sag isn’t a reserve of power. The AC waveform goes between maximum and minimum points at 50Hz in 10mS, it then swings to the maximum negative value. At 20mS, a full cycle is achieved. Therefore, the average values of an AC waveform are in fact zero. Only as a power wave can it be positive, due to the law of squared negatives. It looks like a ballooned sine wave where the value of 45 degrees is 0.5 not 0.7071 from a trigonometric table. Were this only a voltage wave it would have a long-term value of zero. As far as energy storage is concerned zero is the value of stored energy. Therefore any attempt at energy storage would produce a phase shift, which is sometimes described as negative energy.

Direct Current resistance (DCR) will cause sag. To put it in other words, a system has to be developed which does not limit the power reserve of the power station, meaning a circuit needs to have extremely low resistance whilst maintaining sufficiently high inductance. When done correctly and in perfect balance the inductance is virtually zero at 50/60 Hz and the DCR is also very close to zero. Therefore, an ideal filter circuit must maintain zero Ohms resistance DC (or very close) and considerable AC resistance to noise above 50/60Hz. Despite statements to the contrary, this is precisely where correctly specified materials matter most. While some might consider these ‘exotic’, they represent a critical and important part of the function and appropriate to use. IsoTek filter designs can maintain very low resistance at 50/60Hz but have very high amounts of noise cancellation above that frequency.