It’s been a while; the new issue of hi-fi+ (Issue 206) is the product of the first redesign the magazine has received in more than a decade. In the past, when the printed page was far more of a driving force in media, magazines would routinely undertake a redesign at least once every five or so years, but things have changed in publishing and there is a move to remain consistent. Nevertheless, what looked good in 2010 will often look tired a dozen years later.

Unlike our previous refits, the magazine now must reflect how it is read in a wider context. However, it’s also important to periodically refresh the look of the magazine if only to prevent people from getting bored with even the most timeless style. But this is perhaps our boldest change to date.

The most obvious change here is to the masthead and the logo itself. The original hi-fi+ logo has remained unchanged since the first issue in 1999, and the gentle nod toward a play button in that logo was a classic of its time. However, the play button is itself arguably moving into the history books as we acquire more of our music through online streaming sources.

Regardless, changing the logo is no small move, as it effectively identifies the brand. Many companies change their look over the years, however; often almost imperceptible changes are made from year to year and it’s only when you compare the style of 20 years ago to the present do you see how large those changes have been. In truth, there are always unconscious changes across the years to keep everything fresh.

It was also clear that all of the pages in the magazine needed to be brought up to date: what was once clean lines look dated and tired. There is both revolution and evolution at play here; in any big change, what you see at the outset will likely have some course corrections as people get more used to what works and what doesn’t. However, most of the changes to pages of the magazine are in this issue, and any subsequent tweaks are more about fine-tuning than significant change. We hope you like our new, cleaner lines.

Part of the reason for the change is a noticeable shift in photographic demands in magazines. While the simple, descriptive ‘pack-shot’ photography is still important, we’re seeing more ‘room set’ pictures in audio. We’ve noticed that such room set images have become increasingly more popular in our online reviews and that they draw traffic to our website in a way that traditional pack-shots do not. It’s unclear whether that uptick is because they break up the monotony of pictures on a white or black background, or they give context to the product being reviewed. Regardless, we’ll be using more of a blend of both kinds of photography when they are relevant now.

Publishing in the 2020s is a balancing act; it’s easy to create reviews that meet the demands of print media readers at the expense of online readers or vice versa. Readers of the printed page have long spent years learning the style of reviewers; they like that they take their time to weave a story, or that they throw in a few anecdotes about when the writer was a cub reporter and drunk in a bar somewhere. They recognise that complex concepts require long sentences and even longer paragraphs to explain the intricacies of a thing, and those long sentences might be broken up into a number of subordinate clauses; concepts that – while they run the risk of losing the reader in a sea of punctuation – are able to get the message across and might even throw in a few puns in the mix, such as sympathising with those who read old magazines in bed at night and wake up with back issues. 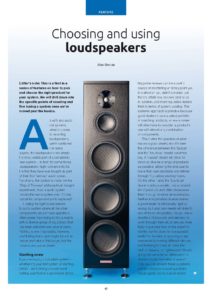 This is different to online reading. Online reading requires short sentences with few subordinate clauses. It also needs short paragraphs that repeat the phrase hi-fi+: new look, new direction regularly as a keyword. This paragraph is almost too long for online media.

The skill is to satisfy both equally without ending up disappointing everyone. And that’s not easy. While we won’t pander to the demands of search engine optimisation (SEO) and tailor our text purely to push our reviews further up Google’s rankings, we need to respond to the demands of readers who have spent the 21st Century reading snappier text. If nothing else, that means breaking up the text with crossheads. But what is a crosshead?

This is a crosshead!

Think of these breaks as an even bigger break in the flow of the text than a paragraph. We have traditionally shied away from crossheads in our text because many of our readers found them unnecessary and even patronising. But tastes change in reading as much as they do in music and audio and it’s time to move with the times.

The change to the look of hi-fi+ is only half the story. In the lockdowns, we realised that too many of our features were show reports; and in the absence of shows, the features begin to dry up. That changes now. We will include features that introduce new and existing technology in simple, yet not patronising ways, how to audition, build and fine-tune a system, how and what to upgrade, interviews with designers, and more. These aren’t ‘new’ features… they are a return to the core of what an audio magazine is all about. Of course, we’ll also maintain our reputation for turning up at the opening of an envelope if it’s about audio.

Beyond additional features, even the scope of the products we review is ripe for a spot of scrutiny. It’s been a little difficult looking at the worldwide audio market in the last couple of years because we’ve all been so inward-looking but despite that, we have seen changes in audio and distinct trends in high-end that we believe are going to be increasingly relevant over the coming years. We think the very nature of audio is changing too.

The big change is the growth in what we call the ‘metropolitan’ music lover, especially in Europe and the UK. Many traditional high-end systems, which are designed for American buyers with large dedicated listening rooms, are simply too large for European homes. These systems are not defined by price points, but by the sheer physical limitations of trying to fit substantial high-end systems into European listening rooms that are often considerably smaller than their American counterparts. 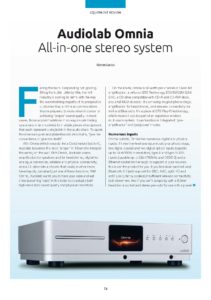 We’ve noticed that far from a convergence, the gap between such systems is getting wider. While the obvious difference is in loudspeaker designs, perhaps the more telling difference comes in amplifier choices between the two continents. Many high-end audio systems in Europe rely on top-notch integrated amplifiers rather than the larger multi-box preamp and mono power amplifier arrangements found in American high-end homes. The change in priorities for European/metropolitan listeners is driven by space concerns, not price; they want the best, but it must come in a package small enough to fit their listening space. Until a few years ago, that meant ‘compromise’, but the modern audio design (both in terms of better electronics and more accommodating loudspeakers) has meant outstanding, high-end audio performance is not simply the plaything of those with large, dedicated listening rooms.

Best of all, while it sounds like a contradiction in terms, there’s growth in shrinking systems. With significant and ongoing developments in diverse fields – from materials science and new amplifier classes to DSP and room-correction/treatment – each successive year sees such systems increase in number and improve in performance.

Back to the future?

However, if all this sounds worrying, remember that audio is a broad church, and magazines like hi-fi+ are not just looking for the Next Big Thing. We are seeing a small, but noticeable ‘uptick’ in sales of CDs; both discs and players. Whether this is due to millennials looking wistfully to the 1990s, or the start of CD’s rehabilitation remains to be seen, and it’s too early to say whether this is a short-term blip or a decade long revival, but those of us who never got rid of their CDs in the time of streaming and downloading are doing our little smug dance right now.

This is an exciting time for hi-fi+ and for audio in general. We’ve seen increased interest in all things audio for a few years now and I genuinely think there’s never been a better and more fascinating time to be an enthusiast!

Back to hi-fi+ Homepage