The name sounds like the title of a 1950s sci-fi movie: VOTU – the Voice Of The Universe! Graham Audio’s grand statement loudspeaker is a bold departure from a brand best known for products very much in the BBC design school. In fact, there is some lesser-known lineage to the VOTU in the Graham Audio line. Several years ago, Paul Graham was approached by the Royal Opera House in London to develop a pair of ‘effect fill’ loudspeakers for one of its theatres. Unlike a typical Public Address system (which might be an active line array), the Royal Opera House wanted a passive design more akin to domestic loudspeakers, only writ large enough to reach a whole, opera-going audience. This became known as the SYSTEM3D loudspeaker. The three-way VOTU is basically that SYSTEM3D design, reworked for domestic use.

However, both the SYSTEM3D and VOTU are not so far removed from that BBC heritage as one might first imagine. As with all of Graham Audio’s designs, the VOTU is from the pen of Derek Hughes, the son of the late Spencer Hughes who was a key part of the BBC R&D team that first minted those classic designs. Also, despite the impressive scale and heft of the loudspeaker, and the bright orange livery of the review sample, the VOTU remains true to the BBC’s strategically damped, 18mm thin-walled birch ply cabinet design, albeit one with internal bracing. You might find that somewhat hard to believe when attempting to man-handle 65kg’s worth of loudspeaker cabinet into a listening room, but if it were made of Corian or aluminium, a loudspeaker of the VOTU’s dimensions would top the 100kg mark. That comes as cold comfort when you need your physiotherapist on speed-dial during set-up. 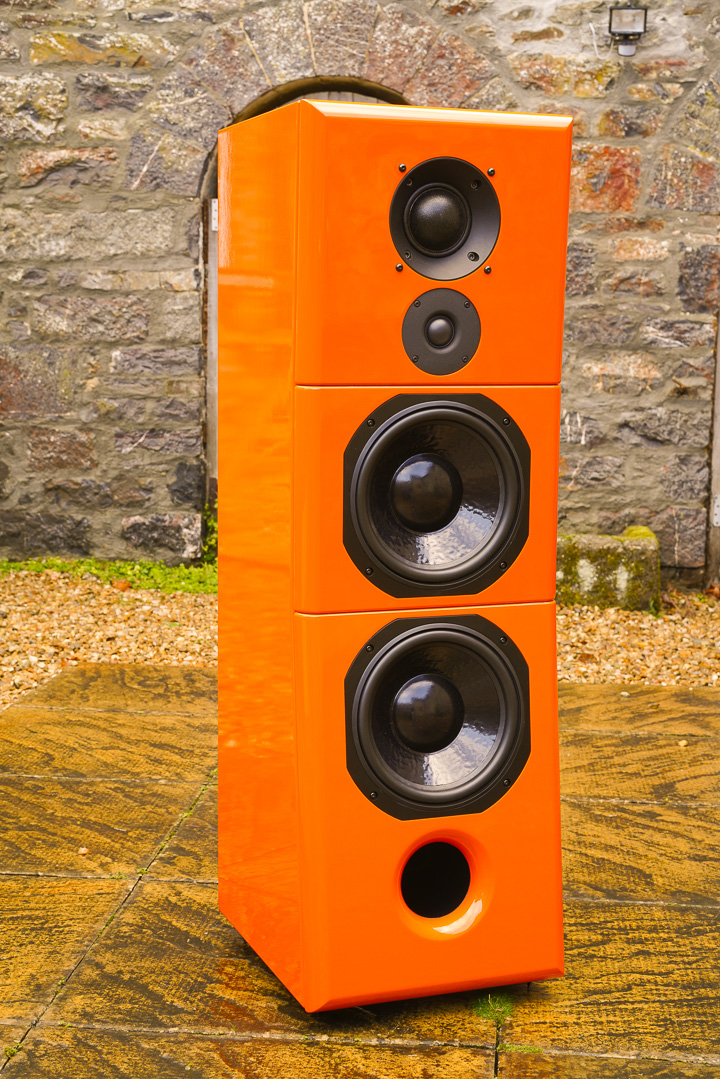 Where the great departure from classic BBC designs begins is in the shape of the front baffle. This is divided into three separate panels: the top, containing midrange and treble domes, which arches forwards slightly, the central 250mm driver, and the lower 250mm driver and front port, which is also angled forwards slightly. The result looks similar to the Focal Grande Utopia EM, only not adjustable and not as extreme: the depth of the VOTU goes from 43cm at the base to 38cm at its midriff. Once you start to include the 37cm width and the 116cm height, all wrapped in a high-gloss paint and lacquer finish, you begin to see where much of that weight comes from.

A fair chunk of the VOTU’s mass of loudspeaker comes from its drive units, too. A pair of Volt 250mm bass drivers coupled with a Volt 75mm dome midrange means a lot of heavyweight magnets behind the scenes, and even that SEAS 34mm dome tweeter is more massive than most. And that load-out represents perhaps the biggest change between the domestic and commercial version of this loudspeaker. The SYSTEM3D has three 250mm bass units.

The loudspeaker is a ported design, with a large, front-firing port tuned very low. The bass drivers cover the sub-800Hz region, handing over to the midrange until 4kHz, where the tweeter takes on the task. As you might expect, the crossover is full of high-spec components and air-cored inductors, although the design of the crossover and its slopes are not specified.

Although the VOTU describes moderately benign sensitivity and impedance characteristics (88dB and eight ohms respectively), this loudspeaker gives away its professional audio heritage by needing a lot of power, primarily needed to drive those two big Volt bass drivers. Graham specifies recommended power amplifiers in the 250W-1kW class, and there was nothing in the listening to recommend much in the way of ‘wiggle room’ here, and both an Aavik and a Devialet were called into place to provide suitable grunt. Fortunately, the VOTU shares the typical BBC characteristic of not being amplifier fussy, so the choice of amp in that 250W-1kW range is relatively open. 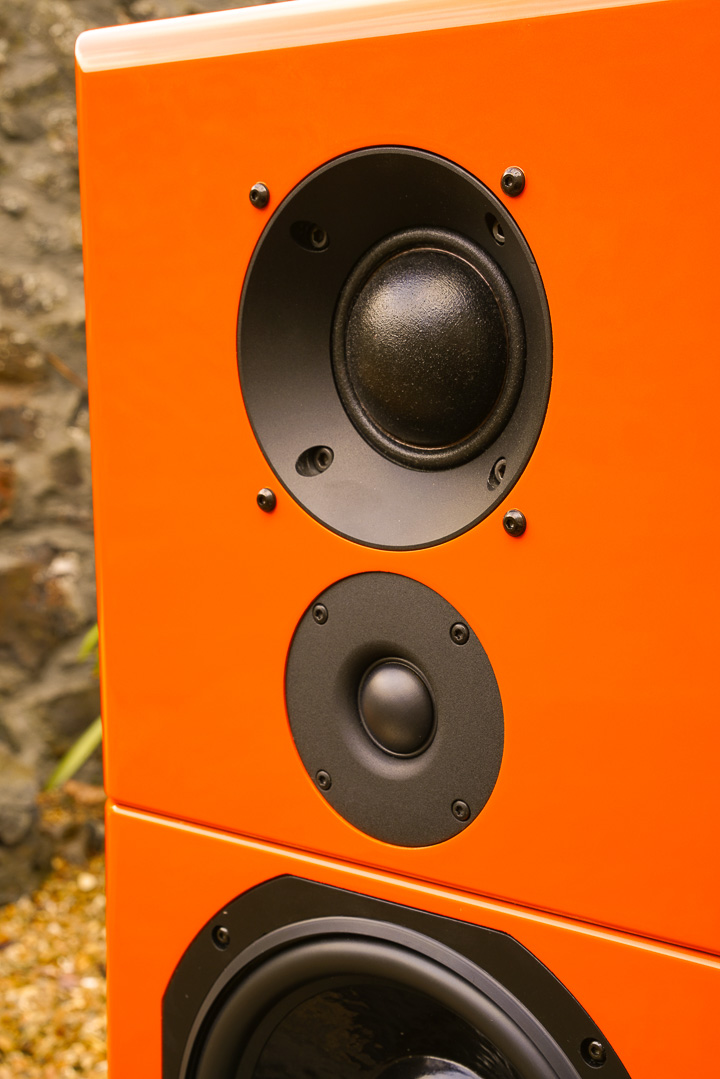 Room size is largely self-selecting. A loudspeaker of this size is going to dominate a small room, and this is never going to be used in the near-field. The relatively large amounts of low-frequency energy unleashed by both half a metre of bass speaker surface area and a fist-sized port does dictate a larger listening room, too.

A mild concern here is listening room temperature. These are not loudspeakers for the well-heeled Eskimo, as they require a reasonably warm room to free up those bass drivers. So, if you have to cut back on heating to afford the VOTU, choose another design!

This is on the one hand, a BBC design writ large. It has all the properties of those classics of the 1960s and 1970s, just more of them. It has the same extraordinary transparency across the midband (with a slight lift in the upper midrange that makes music sound all the more attractive), but that comes with a more deep, powerful underpinning, and the kind of dynamic range that can leave you almost gasping for air. And yet, on the other hand, this is a loudspeaker that demands to show you what music is capable of and wants to play loud. And, thanks to its amplifier demands, it can play very loud, very cleanly, indeed. Be mindful of this when first listening to the VOTU, as you’ll be keen to ‘open her up’ like putting the pedal down on a sports car. If you do, don’t make the rookie error of pushing it into distortion and backing off a notch. The distortion you might be experiencing is your ears relaxing after each pounding from a beat. Use a sound pressure meter instead. That’s the capability of the VOTU encapsulated: you run out of steam before they do!

These are extremely detailed loudspeakers. Paul Galbraith’s interpretations of Bach’s violin sonatas, played on a classical guitar held like a cello [Delos] are textbook audiophile material: a beautifully recorded acoustic instrument in a naturally reverberant space, with an extremely quiet background.  And the VOTU returned a sound that perfectly encapsulated those properties. This was something of an early torture test for the VOTU, as it could so easily make the guitar sound lost, or too large. Instead, the VOTU helped Galbraith occupy the Goldilocks spot in the soundstage.

Moving over to something with more scale, such as Herbert von Karajan and the Berliner Philharmonic playing Wagner overtures [EMI], the VOTU stepped up to the more dramatic, dynamic performance. Playing ‘Tannhauser’, you got a sense of substance and energy, from the opening woodwinds, to the dramatic rolls of the tympani and swells of the brass. The properties the speaker brought to the fore changed, from soundstaging and detail on the subtle Bach piece to thrusting dynamics and power with the Wagner.

After a spot of Wagner, it was time to sweep majestically jazzwards, with ‘Young and Foolish’ from The Complete Tony Bennett/Bill Evans Recordings[Fantasy]. The VOTU carries Bennett’s voice perfectly, presenting his diction, passing tones, and overall tonality extremely well, while Evans’ piano tone shows his mastery of harmonic structure and effortlessness of playing. The tonal balance – easy to spot on this track – is a little more forward than the archetypal BBC design, but this fits better with more modern equipment, and more contemporaneous recordings. 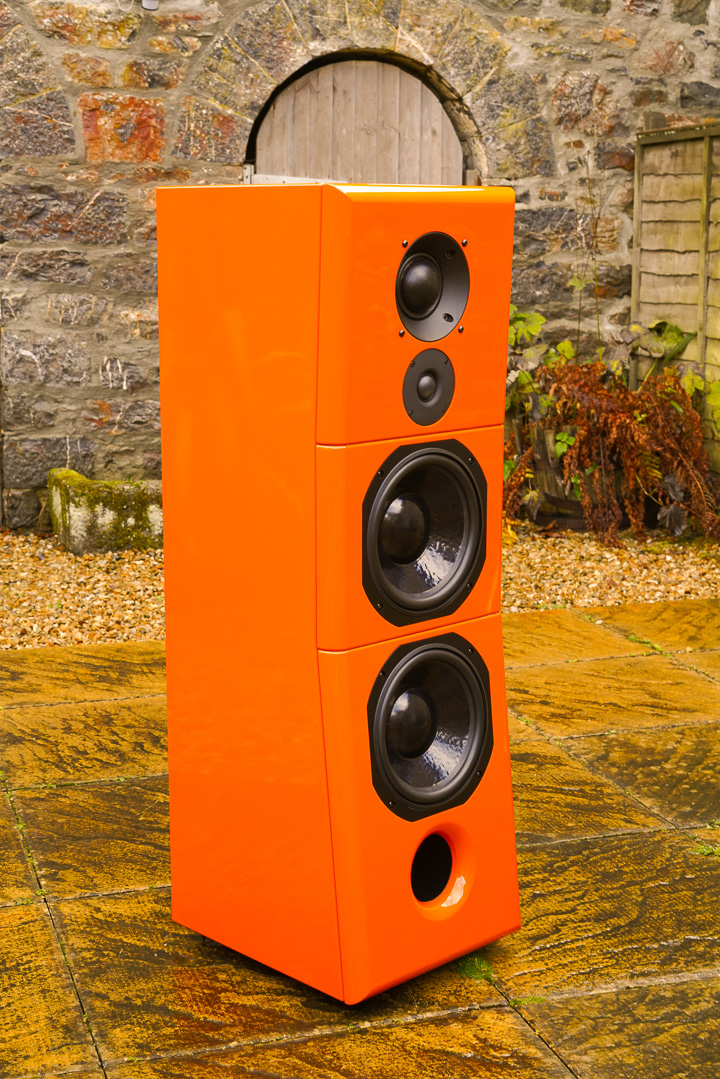 I fired a lot of music through the VOTU and in almost every case got the same response; a sound that is at once extremely listenable and articulate. The overall presentation is clean and dry sounding across the midband and treble, but with a sense of earth-moving heft at the bottom end, and an easy, effortless treble. It’s probably not the loudspeaker for those seeking bat-eared high-frequency resolution, and it’s not ideal for fast-paced electronica bass notes; the fast-paced, almost square-wave broadband bass notes on the live version of ‘Numbers’ by Kraftwerk [Maximum-Minimum, Kling-Klang/EMI] tended to blur into one another, possibly their lowest frequency hitting the resonant frequency of that port and causing a spot of choke-up. In fairness to the VOTU, however, this was a ‘playing at party levels’ problem.

In a way, the Graham Audio VOTU answers a very American question. Audio is still very much locally-grown produce, and although there are products that cross the Atlantic, much of what’s perceived as a major player in the UK market remains virtually unknown in the US. The BBC designs – and subsequent post-BBC models from brands like Harbeth and Spendor – are rare exceptions. Almost every American audiophile I’ve spoken to in my time knows of the LS3/5a, the Spendor BC1, and probably loudspeakers like the Harbeth Compact 7es-3. And every one of them has then mused… “I wonder what they would sound like with some real bass?”  Graham Audio’s VOTU is a response to that American question, with some styling changes to bring it up to date. In fact, what the VOTU shows is just how low distortion extends out when you scale up the design.

In fact, the VOTU is actually the voice of the opera house, brought home. Graham Audio couldn’t get that close to ‘Voice Of The Theatre’ without tripping over ‘Harmsung’s’ legal team, but actually Graham Audio doesn’t need to go for homage nomenclature. This is a Great British Loudspeaker! 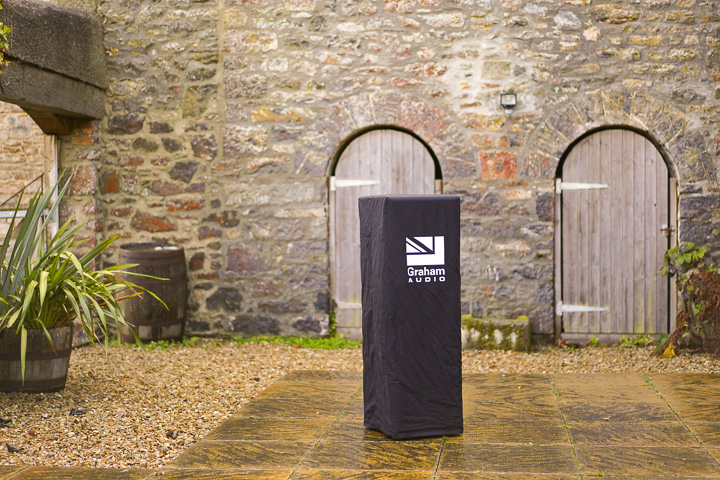