If ever there was a speaker that best encapsulates ‘affordable excellence’ in audio, it would be the GoldenEar Triton Five. This tall, elegant floorstander is priced to compete with two- and three-way tower speakers, yet the cloth-wrapped Triton Five manages to combine a D’Appolito-style ‘MTM’ (mid-treble-mid) layout with extremely high performance drivers, with a full subwoofer section built into the base of the tower.

The specifications are impressive, especially at the price. The top part of the loudspeaker houses two 152mm cast-basket mid-bass drivers flanking what GoldenEar calls a High-Velocity Folded Ribbon Tweeter, a direct descendent of the Heil air-motion tweeter used by Audiovector, Burmester, and more. Along the bottom sides of the enclosure are four opposing, inertially-balanced planar 200mm sub-bass units, two per side. The crossover sits behind the MTM block, because the motive force of the bass units could add undue vibration and resonance, and the combination of a slight backwards rake and non paralleled side panels means the speaker has a degree of time-alignment and internal standing wave control. The fit and finish is good too, given a lot of the speaker is hidden behind a large acoustically transparent sock. The top plate is removable for obvious, sock replacement reasons (should you find a cat decides to treat the sock like its own personal Everest, or you are clumsy enough to spill the entire contents of an Indian meal down the side, a removable top-plate is a good idea). The speaker comes in a range of colours: Noir, really, really dark grey, Obsidian, Raven wing, Onyx, and Coal. Just kidding, they only come in black.

The Triton Five is a loudspeaker with a claimed frequency response reaching down to 26Hz, with a sensitivity of 90dB and a nominal eight-ohm impedance. So, it should be relatively easy to drive. In reality, that’s sort of the case. This is the kind of loudspeaker that loves power, and to get that 32 inches of bass surface area moving needs both voltage and current to kick the Triton Five into high gear. This is not impossible, even in a relatively low price setting, but the Englishman’s Fear of the Watt needs to be suspended if you want to take maximum advantage of what the Triton Five has to offer. In particular, the Triton Five needs that big amp ‘grip’ that only a large power amp with an appropriately ‘stiff’ power supply can deliver. Once that condition is met, you are, ahem, golden!

Installation is relatively straightforward and these are unfussy speakers to install. The loudspeakers need a lot of room, especially to the side walls, and this may preclude using the speaker in smaller European rooms. That being said, anything more than 3.6m (12’) wide will be more than sufficient, and the loudspeaker doesn’t need to project greatly into the room, so you could in theory use the speakers to fire across a 12’x16’ living room. They are more comfortable firing down the 20’ length of a 20’x16’ room, however.

The loudspeaker has a ‘mail’d fist in a velvet glove’ kind of presentation. This means the kind of big, deep bass that many of us thought wasn’t at all possible at this price level: or at least if it was possible, you wouldn’t want that kind of bass in your listening room. Used with an appropriately powerful amplifier, the Triton Five brings truly awesome-grade deep bass and power without the sort of overblown, flabby, tubby, and flubby bass groans that you can get at this price level. The Triton Five’s bass is the kind that makes you reach for Leftfield or James Blake to see what it’s capable of; you play one of those deep bass tracks (I chose ‘Melt’ from Leftfield’s Leftism album, on the Hard Hands label) at a fair lick, then when you have managed to push your eyes back from the back of your head and clean up all the broken glass, you realise what they are capable of. After that, though, you tend to go for the more subtle moments in music, and realise the Triton Fives are not just there for earth-moving purposes.

The other big feather in the Triton Five’s cap is its soundstaging properties. The loudspeaker builds a wall of sound; not in a manner befitting a murderous 1960s impresario with mad taste in hair, but more like your rear wall has been replaced with the concert hall, club, studio, or other venue in which that particular recording was made. There is a true sense of epic scale on offer here, the kind of thing that you might have to spend £10,000 or more to experience elsewhere. This means that orchestral music is played at orchestral scale and the sense of presence in room is palpable. On the other hand, play some cool jazz from the 1950s and you can almost see the cigarette smoke filling the room. The Triton Five is three dimensional, incredibly open, and capable of an extremely accurate soundstage that ‘scales’ sublimely well. 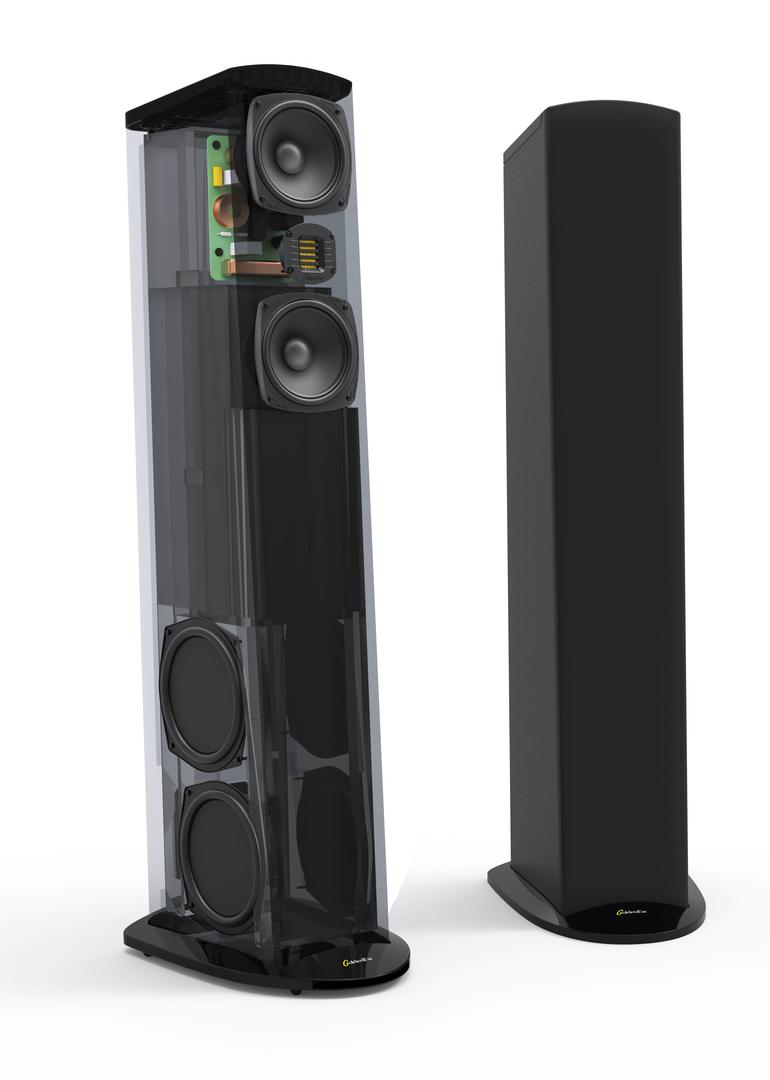 These two aspects combine perfectly in rock, especially Prog Rock. The simultaneous need for a huge soundstage coupled with an ability to play very deep, very loud is the perfect laundry list for playing Tarkus by Emerson, Lake & Palmer [Cotillion] or for that matter Lateralus by Tool [Volcano] or even Black Holes and Revelations by Muse [Warner], although the last shows up a lot of compression in the process. The Triton Five stays on the right side of Prog pomposity when playing these potentially pompous platters, instead going for the large soundstage and powerful, dynamic bottom end.

It’s not all just about bass and soundstaging, although these are the stand-out aspects of the design. In fact, there’s a fine sense of top-to-bottom coherence, too. The speakers have a natural-to-rich tonal balance that is extremely alluring, and the clean, extended, and grain free treble associated with AMT ribbons. This makes the loudspeaker more than just a bass-powered bruiser, or a wide soundstage with nothing to back it up. This is a deft and subtle loudspeaker too, and that comes across well with fey girl-with-guitar music like Kat Edmonson’s somewhat overplayed ‘Lucky’ from Way Down Low [Spinnarette]. If it can focus your attention as well here as it does with Muse’s bombast, the speaker is doing a lot right.

Viewed from the position of someone used to small-scale, typically British two-way standmounts, all this low frequency energy and broad soundstage may almost flood the listener. However, it’s a little like eating steak after a life of hamburger – the real thing might be overwhelming at first, but it’s hard to go back afterward. Early listening to large speakers after living with little ones can sometimes make you think the bigger speaker is ‘slower’ where in fact you are relearning how to listen to bigger loudspeakers. British audio enthusiasts used to know this and would regularly upgrade from bass-light small-box designs to the more authoritarian bass of IMF or TDL models. Fast forward to today and the Triton Five balances these desires perfectly, sounding a lot faster, a lot more detailed and more dynamic than older transmission line IMFs, but retaining their bass slam and energy.

Spending more does eventually justify itself. When you start to talk about the ‘shape’ and ‘texture’ of deep bass notes, without sacrificing the ‘depth’ of bass, then suddenly some of the true titans of high-end begin to win out. This doesn’t manifest in playing dub reggae or dubstep, but comes across when playing something big and orchestral and a little bit dour – symphonies by Mahler or Bruckner. The bass comes across as the most powerful and structural you can get in its class, but lacks the kind of cold beauty required to portray the depths of this kind of music. Still, we are talking about spending an order of magnitude more than the Triton Five to achieve this ‘textured’ bass quality without sacrificing bass depth in the process, so it’s hardly a major concern. You aren’t buying a KEF Blade ‘on the cheap’ here, but you are buying an exceptionally good loudspeaker that shows its rivals a clean pair of heels. 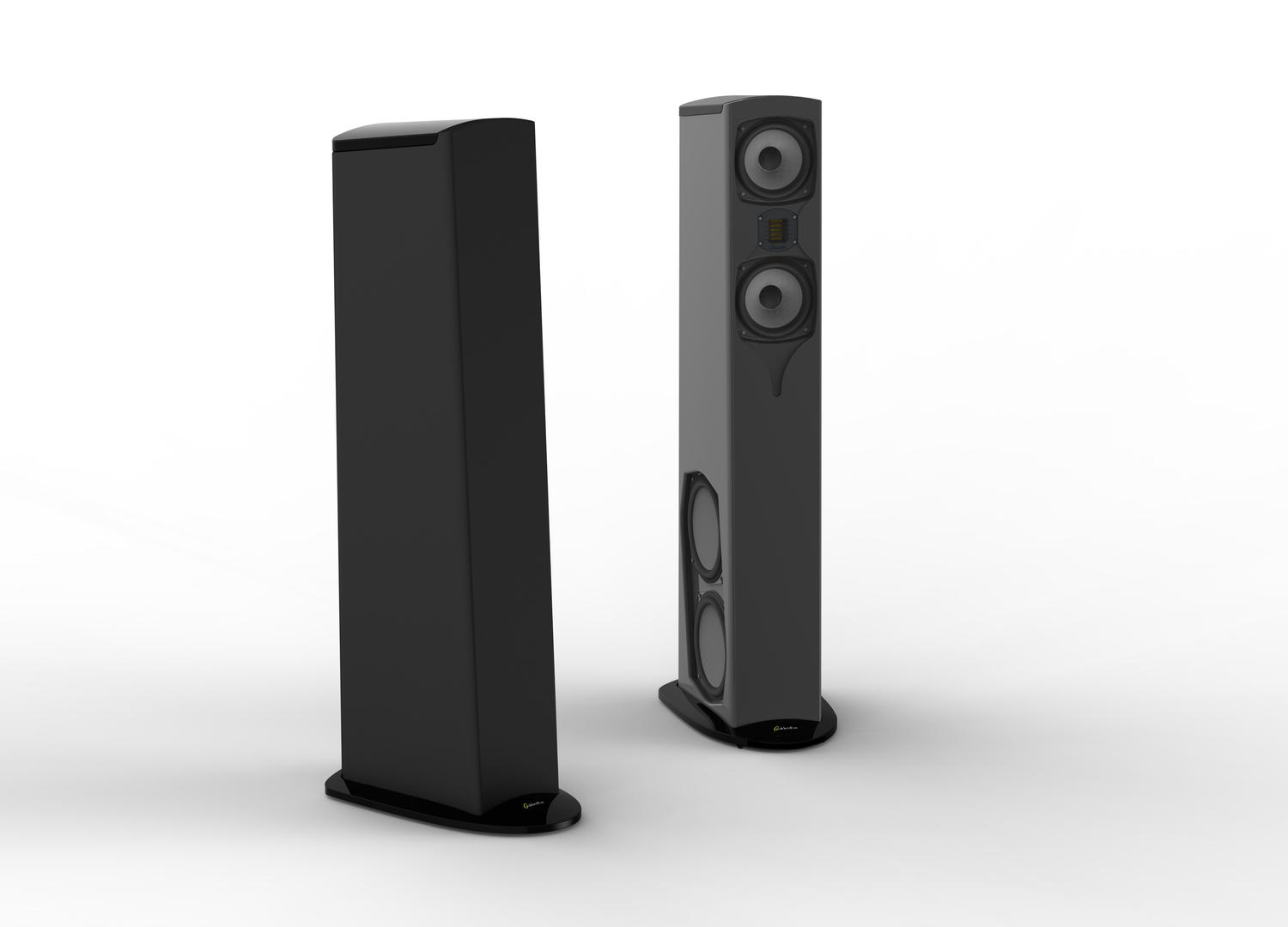 It’s hard not to be impressed by the GoldenEar Triton Five, because materially you are buying a lot of speaker for the money. The fact that it also delivers a lot of really good sound for the money is an unexpected surprise. At the price it has no peers and no parallels, and comes strongly recommended.