Although best known as a loudspeaker maker of some note, German Physiks has long since taken steps to make sure its core products get the best possible performance. This is not a new thing; many companies best known for one branch of audio have produced other components in the chain. Often this moves from ‘showcasing’ the core product in its best light to creating an outstanding product line in its own right; such is the case with the Emperor amplifier range from the company.

Emperor is a range of five audio electronics components; an integrated amp, a preamplifier, a crossover network, a stereo power amplifier and a pair of mono power amplifiers. The size and heft of each are almost relevant to the class above; the integrated amplifier has the sort of size and weight one might expect from a large stereo amplifier; there are few standard equipment tables that can house an amplifier that’s almost half a metre wide and deep, a quarter of a metre high and weighs in at a healthy 60kg (that’s 132.28lbs or nine and a half stone in old money). The whole range was first shown about three years ago but has years of prior development.

The Emperor integrated amplifier combines the electronics from the Emperor preamplifier and Emperor stereo power amplifier in one chassis. All the components are mounted onto a heavy-duty internal steel chassis. An outer chassis is attached to this and is made from 15mm thick machined aluminium. The sides, top and rear are made as one assembly attached to a steel frame, allowing them to be removed for easy access when servicing. This assembly on its own weighs 17kg.

There is extensive heatsinking but it is primarily housed inside the unit. This gives a cleaner look and hides a lot of potentially sharp edges and corners. The heatsinks are large enough to ensure that the unit runs cool, even when running at high power levels. Running at a lower temperature extends the life of the components. Generally speaking, every 10°C increase of a component’s operating temperature reduces that component’s lifetime by half. 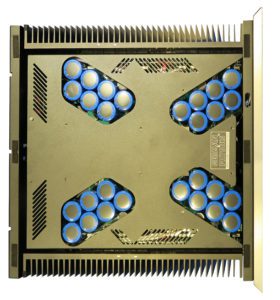 The hot air from the heatsinks vents out through openings around the edge of the chassis top plate. Beneath this, covering the electronics is a ventilation control plate that has an array of strategically placed holes. This controls airflow through the unit so that all the components operate at an even temperature. This ensures optimal operation of the balanced circuitry; if some parts of the circuit are at different temperatures, the balance of the two halves of the circuit is disturbed. This ventilation control plate is made of steel; not just to give it an impressive heft… steel acts as an electromagnetic screen. Both the precision of that balanced circuit temperature control and the steel used in the ventilation control plate are said to reduce the noise floor of the Emperor’s amplifier circuit. This sophisticated passive cooling system is not the sort of feature that comes from either electronics engineers or industrial designers; it comes from working with an engineer who specialises in designing cooling systems for electronics.