The Dan D’Agostino Master Audio Systems Momentum Integrated amplifier is effectively two boxes in one. The lower, base chassis doubles up as the power supply, and a short, green, braided, four-pin connector cable connects this to the main amplifier stage. The amplifier itself sits on this baseboard supply using four sharp screw-in spikes. And the reason for the bluff introduction instead of some florid prose is because the amplifier is so powerfully built it needs no such flummery. It’s a ‘get on with it’ amplifier. So we will!

There are six colour-coded inputs (both as push-buttons on the front panel, and replicated on the unique round remote control handset) and these are all balanced inputs, fed by a central sextet of XLRs inset into the centre of the rear panel. It also features fully defeatable bass and treble controls. There is also a rear mounted headphone jack alongside the solid multi-way speaker terminals (not WBTs, as anything plastic-jacketed is just not ‘deep time’ enough for the D’Agostino). There’s even an RS232 port and a mini-jack for the well-machined IR extender supplied in the box. Although ‘box’ actually means ‘velvet-lined aluminium flight case complete with rolling luggage wheels and handle’ – it’s that kind of product. 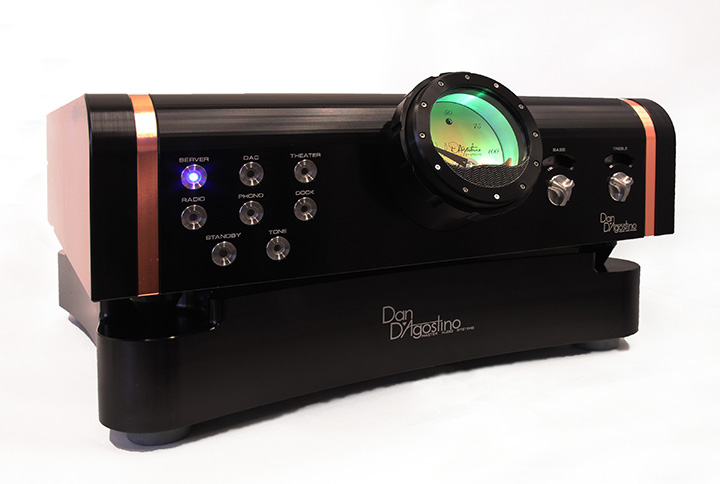 We’re dancing round the subject here. It’s the look and the build quality that makes the biggest impression. In silver or black (as per the review sample) with those contrasting copper heatsink bands, this product is machined to look the part. It’s fearsomely heavy for a relatively small box (54.4kg for the two boxes) and runs very warm, but you won’t care. This is one of the most distinctive and powerfully designed amplifiers out there. The green glowing central volume display (inspired by watchmaker Breuget) is a talking point, as is the volume control wheel that flanks this display. This dial supposedly took an age for D’Agostino to get right, but it immediately pays off in ‘engineered quality’ the first time you use it.

Beneath the elegant casework, the amplifier is a discreet, fully balanced very wide bandwidth Class AB design delivering a healthy 200W into eight ohms that perfectly doubles its load to 400W into four ohms and again, delivering 800W into two ohms. This is a useful indicator of the amplifier’s power supply design, as a less ‘stiff’ power supply will never be able to double its power into the lower impedance load. This also helps it to drive tougher loudspeaker loads without effort. Our sample arrived with many miles on the clock, so any questions about running in began and ended long before we took delivery. As a consequence, the Momentum Integrated sounded excellent as soon as we recovered from lifting it out of the case, although a true running in phase may be required.

We had at first intended to review the M-Life – the variant of the Momentum that includes a streamer in place of the tone controls – but events conspired against us (D’Agostino can’t make them fast enough, apparently). But the Momentum Integrated also opens up a new line of ‘system curation’ in the wake of distributor Absolute Sounds taking on UK digital experts dCS because the combination of D’Agostino amplification and dCS sources is an internationally popular mix. This is also a good choice because the balanced output of any of the three current dCS digital sources makes a lot more sense than trying to turn a single-ended source pseudo-balanced. Factor in a pair of Wilson Audio loudspeakers and runs of Transparent Audio (plus some Stillpoints equipment supports and a few Tube Traps) and you have a turn-key high-end system that will take on anything the rest of the high-end world can throw at it.

The ‘take on everything’ factor is perhaps the most obvious and immediate fix on the Momentum integrated’s performance: absolute authority. The amplifier’s other sonic benefits (and there are many) resolve out over the first few hours spent in its company, but that first impression is of an amplifier in complete control of its environment. It combines the fast-twitch reading of the audio terrain like a fighter pilot and the ‘the skies are mine’ confidence of the admiral of an aircraft carrier fleet. The result is an amplifier that has no challengers, except for more of the same from D’Agostino’s own preamp and power amplifiers. Even if ultimately you take a different audio direction, you cannot help be a little in awe of that confidence and sheer control over the proceedings the Momentum integrated displays.

This confidence is most notable in the bass, where the D’Agostino has the perfect combination of power, precision, and performance. You could add ‘punch’ there too, because that almost visceral gut-punching force really hits home in the bass making your loudspeakers sound deeper and more powerful than you expected. This isn’t just for dub bass lines or thundering cannons (although it certainly helps make bass-oriented elements take on an authenticity and energy that is refreshing). In fact, it’s the more surprising bass textures, like the way Sam Jones’ upright bass just hangs in the room like the real deal on ‘Love For Sale’ on the classic Cannonball Adderley album Somethin’ Else [Blue Note]. Every pluck of the strings, every finger squeal as he moves around the neck, the precision of his playing is brought perfectly to the fore. This is an album I know backwards, and have used it as a test recording for listening for years. I know the shape and texture of that walking bass line extremely well, and I know how it sounds through tightly controlled amplifiers and amps. Regardless, the D’Agostino Momentum shows new insights.

For all the Momentum’s power, control, and deep bass, D’Agostino also gave this amplifier the kind of temporal precision one might expect of a small, fast British amplifier. Viewing this with a kind of mid-Atlantic balance, the American’s Fear of Timing meets the Englishman’s Fear of the Watt, and often the criticism levelled at more powerful amplifiers is they don’t have the quicksilver temporal precision of a fast-paced sub-100 watter. When you hear what the Momentum Integrated can do with a beat, you realise this temporal precision has nothing to do with power output, but a lot to do with good amplifier design. One of the best recordings to highlight this is one of the worst recordings I have: ‘Addis Black Widow’ by Mulatu Astatke & the Heliocentrics from their Inspiration Information Vol 3 album [Strut]. This Ethopian-based slice of ethno-jazz funk is all about the drumming, featuring some of the most out the pocket and off the wall rhythms you will hear. Think that rhythmically lazy but actually ‘inside the song’ drumming of a young Ringo Star, but seemingly with six arms and four feet. On an amplifier that plays music simply for the size of the soundstage or the precision of the detail, this track sounds like someone is throwing a drum kit down a very long flight of stairs. On the D’Agostino, however, you get a sense of rhythm just kept together to give the track a malevolent undercurrent: precisely what it should be doing.

Couple this ability to tease out the most complex rhythms well with the sheer amount of detail, the precision of the dynamic range (both in resolving small changes within a passage of music, and dealing with those more broad dynamic brushstrokes you get with Bruckner or Mahler), the functionally perfect sense of coherence that makes a string quartet seem almost psychic, and the ‘wide, high, and deep as the record permits’ soundstaging properties, and the D’Agostino is something really special.

We mentioned the M-Life earlier, but having used the Momentum Integrated for some time, I’d actually find it hard to lose the tone controls, because they are possibly more useful than ever. They help tailor the sound of modern recordings, taking some of the edge off bright recordings and a bit of bass boost can help flesh out some of those ‘Mastered for iTunes’ bass-light albums. 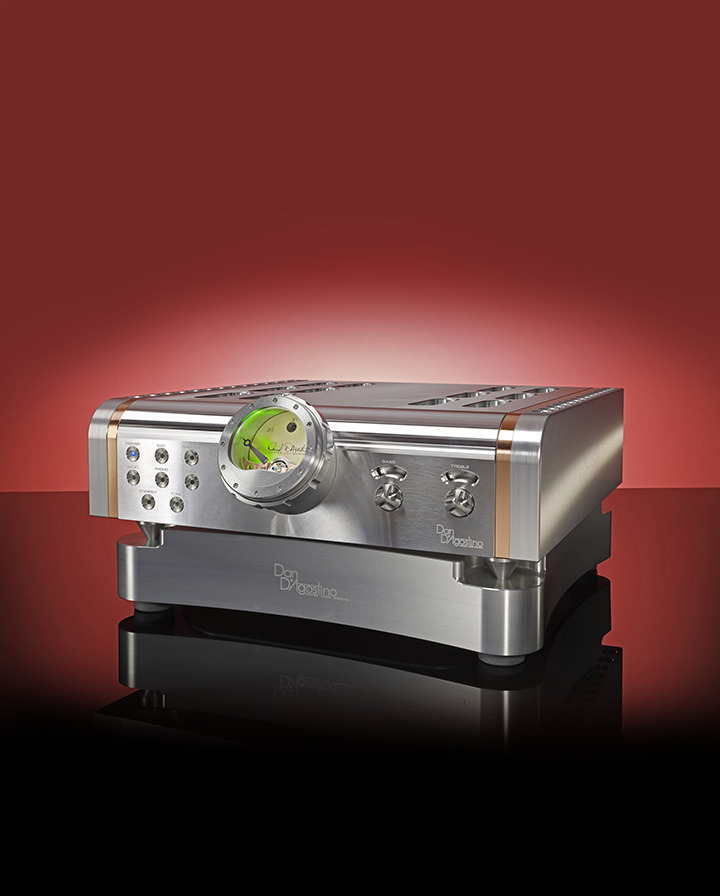 The D’Agostino Momentum Integrated is one of those rare products that stands out even among highly-respected rivals. It’s one of those designs where the only thing better than the Momentum is more Momentum; a move to separate preamp and mono amps – even the pre and stereo amp might be a bit of a sideways move rather than a leap forward. If you are looking for what is quite simply the best integrated amplifier out there – and have the shelves to take it – the Momentum Integrated is the heavyweight champion. Very highly recommended!

Distributed in the UK by: Absolute Sounds