There used to be one inviolate rule in audio; racks – like fine wine – don’t travel. There was good reason for this; they are heavy and tended not to be in the same high-end league as their electronic counterparts in a system. Critical Mass Systems was one of the first companies to tear up that rule book, producing products that retain all the elements of high-end audio in terms of performance-raising abilities, weight and price. The company’s Olympus V-12 and Maxxum systems form the foundation for many of the highest of high-end systems around the world. Meanwhile the QXK system tested here brings many of those high-performance sonic elements down to a more manageable price and physical aspect.

The basic concepts of all three Critical Mass Systems racks (five, if you include the otherwise identical to QXK three-legged PXK and the Sotto Voce rack) is the same throughout and came about as a response to vinyl enthusiasts wanting to divorce their turntables from the environment without hobbling the sound in the process. Each system features a very solid aluminium frame using black tubes as uprights and contrasting clear (or matching black) anodised aluminium platforms, designed to support Critical Mass Systems’ range of damping/filtering shelves. Each shelf features a six-stage, dual-zone damping system with 20 damping layers in its upper sections and 12 damping layers in the shelf’s lower stages. This was developed using a punishing regime of iterative, trial-and-error evaluation until a ‘recipe’ that worked uniformly well was developed and given this is effectively the third iteration of this shelf system, the process of honing the performance is ongoing.

The shelves themselves rest on four ball-bearings to limit the possibility of vibration transmission from stand to platform to shelf but given the amount of filtering inside the shelves themselves, the need for additional vibration control in the rack is almost academic. There are three grades of shelf: Black Sapphire (for products up to 100lbs/45kg), Black Platinum (for products up to 200lbs/90kg) and Black Diamond (as per Black Platinum, but with improved damping and filtration). It’s entirely possible to upgrade as your demands change over time, using Black Sapphire for sources and preamps and Black Platinum for power amps, switching over to Black Diamond when funds permit. Given the price of admission for the support system in even its most basic Black Sapphire guise, I suspect the upgrade path will not be taken too often. Maxxum and Olympus have their own shelf systems that take the Black Diamond concept and run with it.

Assembly of the rack is straightforward but is both time-consuming and should be performed with painstaking precision. Set aside a day for doing it properly. There’s nothing that would challenge your Ikea-Fu (the feet, legs and platform supports all bolt together in a logical manner, but to give the QXK Grandmaster-grade stability requires a lot of bolts). Unlike many stands, it’s possible – advised, even – to build a layer, add the product intended for that layer, then build the next layer. This is a good idea as it limits the possibility of either moving or damaging the filter platforms (damage is unlikely, but as the platforms sit on ball-bearings, accidentally moving them during the installation is not a good idea… just ask any user of a Naim Fraim just how much swearing that produces). Of course, this means optimal tightening of the outer frame from the get-go – by way of contrast, so many stands act like a set of untamed bagpipes until they get the final tighten and levelling process.

The net result is a sound that brings out the best from the equipment that resides upon the QXK rack and its shelves. We want and get detail – but that’s on show in almost every good system – but QXK presents that detail in an ordered, natural and coherent way; the way the equipment should sound.

Without it sounding like it accents the bass or drums, the QXK system makes your system sound like it has a better back section. Equipment on the QXK hang together better in a more rhythmically-coordinated manner. Often, this sense of rhythmic cohesion happens because of an accented leading-edge, which is why ‘PRaT’ (Pace, Rhythm and Timing) is so commonly associated with music in strict 4/4 time. Here, by teasing out the nuances of the rhythm section – through sheer absence of background interference – that rhythmic integrity just seems natural and makes recordings that bit more lifelike. Weirdly, that applies far beyond the 4/4 time signature; try Panufnik’s Sinfonia di Sfere [Tampere Phil, Storgards, Ondine/Naxos] for example; the almost architectural compositional style doesn’t give much rhythm for a system to cling to, but without that rhythmic scaffolding, it can just sound like random orchestral noodling. The QXK system gives the system that scaffolding needed to support the music, and this makes it more comprehensible. 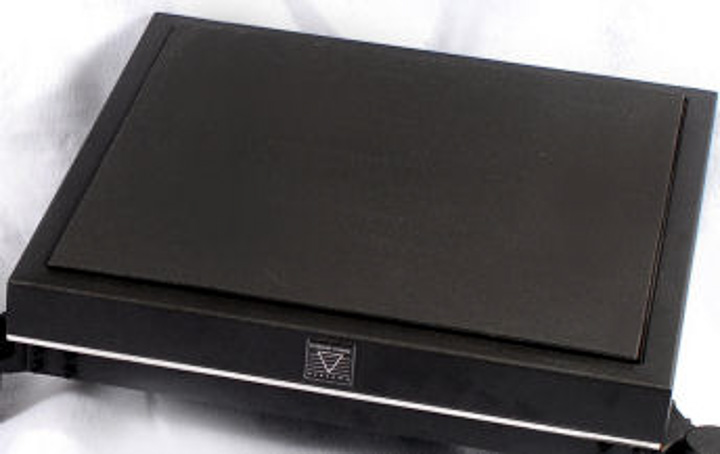 Moving away from more challenging modern classical music, the QXK’s combination of letting the audio electronics do what they are supposed to do with few constraints coupled with a general tying together of the sound makes for a very entertaining experience. In particular, the rack gives the system opportunity to play loud (or very quiet) without being influenced by the surroundings and it makes you want to listen to more music for longer. Not just delicate audiophile-approved jazz; ‘Wiley Flow’ by Stormzy [Heavy Is The Head, Merky/Atlantic] spits along with real power and force.

Despite being two stages down from Critical Mass Systems Olympus V-12 flagship, this is a physically big, tall and heavy rack. Its turntable heritage shines through because the top-most component on the rack with its platforms is at an ideal height for changing a record without crouching. The system exudes Gibraltar-like solidity, and the rack acts like a peacemaker, bringing all that sit on it into musical accord. This is a change to the sound that at once immediately impresses but more importantly has staying power. It’s the rack that keeps on giving. If you have the best and want the best, Critical Mass Systems might just have all the answers.

Steve Dickinson looks at the latest CD player from Accuphase, and realises it had been a while since a CD player has been in his listening space.

Norma deserves more recognition than it gets, says Alan Sircom.

Jason Kennedy realises that Melco have significantly raised the bar with this Network Switch.