Critical Mass Systems is well known for making some of the finest (and largest) high-end audio equipment support systems money can buy. So, it might come as something of a shock to discover that CMS maven Joe Lavrencik’s best-ever product might just be an inconspicuous vibration-control foot called the Center Stage2.

Joe is being perhaps understandably reticent about discussing the inner workings of the Center Stage2. According to the company’s white paper, Center Stage2is made by “choosing and sequencing materials that possess the perfect combination of damping, elastic modulus, and thin rod speed to lock in the desired effect.” That effect is, “a catalyst in a complex energy reaction that occurs between your equipment and its environment.” The idea is that kinetic and vibrational energy act in an unregulated and undamped manner inside a product and Center Stage2can “change the prevailing state of equilibrium in that energy reaction and to permanently hold it in a reduced or damped state.”

According to Lavrencik, “Center Stage2was designed to exacting specifications using material science and First Law of Thermodynamics principles.  It also relies heavily on the Second Law of Thermodynamics to meet its performance objectives. There is no new physics in Center Stage2, we’re simply applying physics in new ways to an audio foot.” Lavrencik focused on three aspects: impedance mismatching to greatly reduce vibration moving upward from the floor, the reduction of the noise inherent to the materials used to fabricate the foot, and a means to transfer entropy out of the component.

What this means in real terms is a black anodised aluminium foot with an almost free-spinning aluminium foot pad on the base, and the top is covered with stiff, black paper-like material. You have three sizes of the foot, dependent on the mass of the device and the size of its own foot. You need four feet per device. They are placed on the underside of the device, not on a screw-head or as a footer under the component’s own feet. It works on practically everything except turntables and loudspeakers (but including turntable power supplies).

Here’s where it gets weird: you stick a quartet of Center Stage2under your source component and… it sounds terrible! Add a set to your preamp, power amp, or integrated amplifier and the sound gets even worse. Your hitherto full, detailed, and dynamic sound is transformed into something thin, muddy, and flat. Next day, it gets a little better, then it gets worse, then better still, then worse again, and so on. Generally, it fills itself in from the bass upwards, with the bottom end being the first to return to prior levels. You’ll get about a week and a bit’s worth of audio mood swings. And it’s at that point the transformation happens and the system blossoms.

You notice this change by a shift in your internal dialogue. “I’d forgotten just how good that really is!” (referring to both record and equipment) seems to be the first sign. About an hour later, you find yourself composing a thank-you email to the designers of the components in your system. Although it’s the bass that first comes back, it’s the midrange that seals the deal; the enhanced clarity, the walk-in detail to the soundstage, which seems to not change a thing, all the while being far more enveloping than before. This is no small change, and as the listening progresses, you begin to find this feeling of being immersed in the music, which truly transforms your listening sessions, and it becomes uppermost in your requirements for a good system. Everything just seems more natural, more real, and more like the recording engineers and the equipment designers had in mind when they got creative. And the Center Stage2is also one for the Pace, Rhythm, and Timing (PRaT) obsessives, in that a device resting on a set of four Center Stage2seems to keep time better than ever. But it’s that envelopment that really captivates you and takes your attention. If you were a PRaT obsessive before you put a set of Center Stage2in situ, you become a sonic envelopment obsessive who likes a bit of rhythm afterwards.

I’ve used all kinds of feet and pods and the like before. The best of them seem to align one product to another harmoniously. Center Stage2is not like that; instead, it erases many of the impediments that hold back a device. In the process, it gives the device resting upon these devices a promotion. Even the best audio devices have hidden strengths the Center Stage2can unveil.

You can even gauge the magnitude of improvement to be had by the level of initial awfulness of the system sound, and this is also a gauge of equipment quality – things that can never blossom will never have much of a shine knocked off their performance at first, but that’s pretty rare. It’s also self-sealing as the kind of product that is unlikely to resolve enough to show what the Center Stage2can do usually cost less than four Center Stages, and I doubt anyone is ever going to put a £500 device on £900 worth of Center Stages. Once you get to £5,000 though… Center Stage2makes a hugely convincing argument.

Unless you are pathologically impatient (or a reviewer/inveterate box-swapper who changes components in a system on an almost hourly basis) there are no downsides. OK, so if the underside of your component is more screw-head than base-plate, then there might be installation issues, and you might find your system might need a spot of speaker repositioning to accommodate the system improvement, but that’s it. 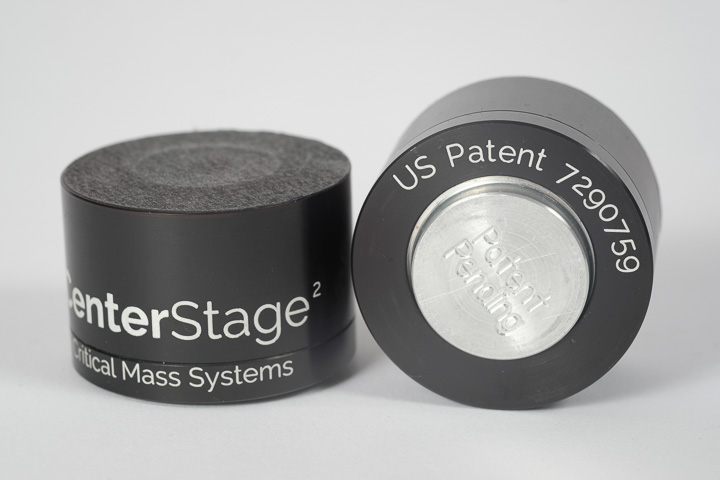 Most audiophiles have a drawer filled with magic cones, domes, pods, and pucks. All of these devices were bought initially claiming a lot, and all tried, praised, used… and removed. The Center Stage2 – I feel – is different. They have staying power. I suspect those who try them will never look back. Instead of being next year’s drawer fodder, the Center Stage2makes you enjoy your system more and does so for longer. Judging by my reluctance to unpack components in a Center Stage’d system (which, to me, means empty pages and ultimately no job) I’d go so far as to say the Center Stage2will make the MTBF (Mean Time Before Futzing round looking for a new audio product) stretch out longer. You only change devices when dissatisfaction strikes, and Center Stage2helps keep that dissatisfaction at bay.

In truth, I’m envious of those who don’t have to put their system into a permanent state of flux because they can gain the most benefit from a set of Critical Mass Systems’ Center Stage2. Let’s not understate their importance… all other things being equal, I’d be happier using a comparatively inexpensive system resting on a quartet of Center Stage2than I would a more esoteric system just sitting on ‘regular’ equipment supports. Although I’m generally a ‘different paths up the same mountain’ kinda guy, I can’t help thinking that this is the best of the best. If you can take the short-term pain, the long-term gain is more than worth it!

Distributed in the UK by: Select Audio