The vanishingly low cabinet coloration not only acts to keep the BC150 fast, it keeps it extremely detailed too. This is a loudspeaker that throws the window wide open on your music. Pick an instrument, preferably a solo instrument on a well-recorded album; that instrument sounds detailed, articulate, and physically ‘there’ in the room, solidly placed within a wide soundstage that projects slightly into the room, but not so much as to be intrusive. It’s detailed and precise enough that colorations are more likely to be to do with the room than the speaker, and many of those are ‘nailed’ thanks to the rear-firing tweeter. The BC150 loudspeaker is an audio reproduction instrument of high-precision, and as such if your room has a bit of a mid-range hump, you’ll notice it more immediately here. Given the BC150 and the company it keeps, that’s no bad thing, as room acoustics should be a strong consideration at this level. But, regardless, listening to something like ‘Love in Vain’, by the Rolling Stones [Stripped, Polydor] and you get to hear Jagger’s voice unsullied by the speaker itself; other speakers seem to play something more like an impression of Mick Jagger by way of comparison.

Then there’s the bass. Lung-emptying, bowel-clearing, demolition-grade bass that you can feel at the back of your eyes. Given some heavy-set amplifiers feeding the BC150, the likelihood is either you or the room give up long before the loudspeakers have hit their end-stops. I routinely use ‘Chameleon’ by Trentemøller [The Last Resort, Poker Flat] because its fast, deep, near-square wave synth bass is a torture test of ported loudspeakers. Here, however, the depth and intensity of that bass is enough to reflect the torture back on the listener… there are big, nasty things lurking in that recording, and the BC150 isn’t afraid of letting them out to play. 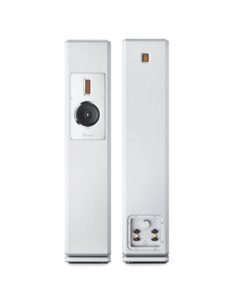 Perhaps most importantly though, that bass is like the rest of the frequency range; very well integrated. Everything hangs together well in the BC150, almost in the way a simple but well-made two-way loudspeaker can. The engineering that makes that effortless integration is extremely hard to do, and even some of the big names in high-end sometimes struggle with a sound that is more individuated ‘bass-midrange-treble’ than an integrated, musical performance.

Interestingly, I found many parallels with the last Burmester loudspeaker I tested, the B38 from Issue 189. That could seem like damning the BC150 with faint praise, but hear me out for a while. This is in fact a wholly good thing. First, it shows great consistency of design; a company that has wild changes in tone and balance between its product lines is doing something very wrong indeed, even if the price differential between the speakers is as profound as the one between the BC150 and B38. But, better still, the BC150 sounds more like a B38 with greater abilities to scale. Or, looking at it from the opposite direction, the B38 has much of what the BC150 offers, but in a smaller size for the more svelte listening room and wallet. Both loudspeakers have an excellent ability to portray a small-scale musical event and a larger orchestral work in their correct sizes, but where the BC150 really shines is that it both has the ability to scale up (to make that large orchestral work have the scale and majesty it deserves) and scale down (so that fey sounding ‘girl with guitar’ recording doesn’t sound like The Attack of the 50’ Woman (incidentally, great title… lousy movie). That kind of true-scale reproduction isn’t impossible to find elsewhere, but in larger full-range designs, it’s usually the preserve of the absolute pinnacle of high-end loudspeaker engineering. The BC150 shows that Burmester should be taken seriously as a loudspeaker brand in its own right. The B38 certainly had the chops, and so does the BC150.

It’s a harder job to get the big ones right in many ways. There’s so much more to go wrong in a larger loudspeaker, and the threshold of expetation is far higher. As a consequence many loudspeakers go for ‘big’ rather than ‘natural’ reproduction. One could even look to some of the earlier Burmester loudspeaker designs from about a dozen years ago and point that finger… but not any more. Yes, the BC150 does ‘big’ in the same way it does ‘deep’. It needs to; no one buys a loudspeaker this ‘physical’ with the expectation of listening to a shrinking violet of a performance, so the BC150 is impressively large sounding and dynamic when it’s called upon to be so and when its called to be more subtle and display a deft touch on the music, it can do that too.