At £3,300 per pair the 702 S2 is a very clever loudspeaker indeed. On the one hand, it replaces the top model from the CM-series. On the other, it trickles down much of technology from the seriously upmarket (£22,500 per pair!) 800 D3. In truth the rather less costly £16,500 per pair 802 D3 are a more realistic inspiration, as they have similar midrange and top end features yet (like the 702 S2) are more compromised at low frequencies. Indeed, the substantially tighter and more open bass was the audible advantage that the 800 D3 had over the 802 D3 when I reviewed the two models back in 2017, and I suspect that a similar degree of compromise will affect this 702 S2.

The new 700 S2-series consists of some six stereo pairs – three stand-mounts and three floorstanders – plus a couple of centre front models and a subwoofer. This 702 S2 is the top model – end of story? (Not quite!) This floorstander shares the ‘tweeter on top’ feature with just the top 705 S2 stand-mount model. Those (such as my son’s better half, I suspect) who find the ‘tweeter on top’ feature aesthetically, er, ‘challenging’ could save substantial sums by opting for the 703 S2 or 704 S2 models. Both feature a very similar tweeter mounted within the box, but also reduce the bass drive significantly: the 703 S2 has just two 165mm bass units; the 704 S2 uses two smaller 130mm bass drivers (perhaps indicating it may be a better match for smaller rooms).

The 702 is a full three-way design, employing a similar ‘surroundless’ (FST) driver as that used in the 800-series, albeit without the latter’s aluminium ‘turbine head’ enclosure. That means of course that the dynamic range will not be as great as that of the 800-series models, but most of the other benefits of an FST driver are fully in evidence. 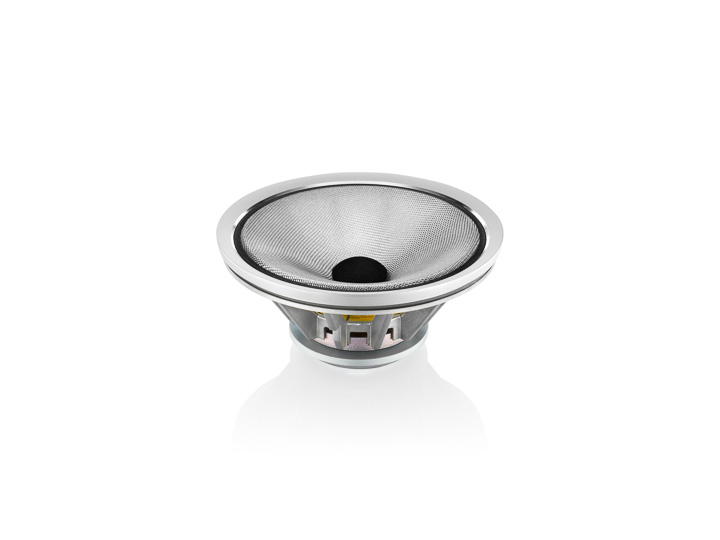 Crucially, this 150mm cone version replaces the original Kevlar cone material – long a staple of B&W engineering – with a softer woven material called Continuum. The sound quality and the in-room far-field measurements both attest to the superiority of the new material, which apparently spent some ten years in development. One advantage of using a woven material is that its stiffness varies according to whether this is measured along the warp and weft or across the diagonals between them. Because of this variation, the outer edge of the cone starts to cancel and the source therefore effectively reduces in diameter as frequency rises, smoothing the breakup and substantially retaining the distribution. Other innovations in the midband include an aluminium chassis that has been optimised through finite element analysis (FEA), a tuned central ‘bung’ to damp any remaining resonances, and a new, more effective and less costly means of decoupling the unit from the box.

The tweeter here is a new development, partly because the diamond dome used in the 800 D series is simply too costly for use in the 700-series. Instead we have a metal dome that has extra reinforcement from a 30µm thick vapour-deposited carbon ‘skin’ on the front, and a 300µm thick carbon ring on the rear. This combination apparently extends the first breakup mode point to 47kHz, which is well short of the 70kHz claimed for the 800 D3’s diamond dome but still comfortably above the 38kHz used by the double aluminium dome in the 600 series, or the widely accepted 20kHz top end of the audio band. A bonus found only in the two ‘tweeter on top’ models is that said tweeter is mounted in a hewn-from-solid aluminium billet that weighs a full 1kg. 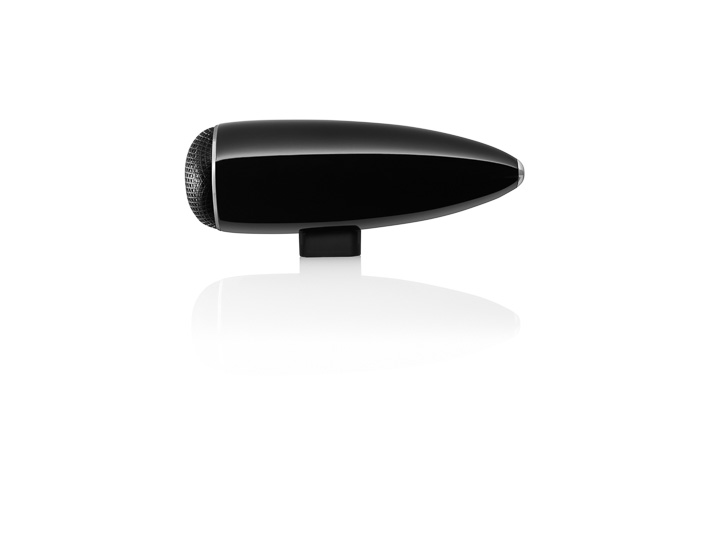 There’s innovation in the (three) bass drivers too, as each of the 165mm units uses an aerofoil-section cone that varies in thickness in order to maintain stiffness with good damping. This is made of paper skins surrounding EPS damping in the case of the 702, saving costs over the carbon-fibre-over-foam used by the current 800-series models. 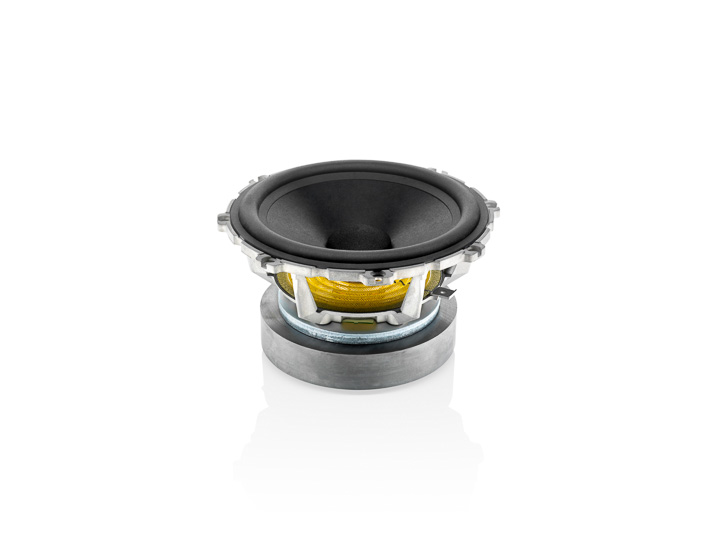 The net result of this rather extensive range of innovations is a loudspeaker that gets remarkably close to an 802 D3 soundwise, yet costs only a fraction of the price. It’s a very impressive allround package considering the reasonable enough price-tag, helped by mass production at a new factory that B&W has built in Zhuhai, China.

Measurements only tend to confirm the impressive performance, with an in-room frequency balance that’s held within tight limits across most of the audio band – roughly ±2.5dB from 60Hz to 15kHz. The Continuum cone shows some reduction in the presence band suckout that Kevlar used to demonstrate. And the top end remains well maintained, even though it appears to lack the smoothness of the diamond dome (dipping a little at around 4kHz). Output is actually a little strong below 60Hz, though it’s also quite even and well extended.

Sensitivity is a generous 91-92dB, though this is rather heavily compromised by an impedance that drops to around 3ohms at around 110Hz. Although the bass end is ported, the port itself is tuned to a very low c.22Hz, so its effect on music is likely to be marginal.

The dimensions part of the specifications refer to plinths that weren’t actually included with our review pair. In fact an earlier B&W model did include just such a plinth, which had been included to satisfy European ‘tilt test’ requirements, and I suspect that it’s unlikely to affect performance in any way. In practice I merely fitted spikes to the 702 S2 in the normal way, and then mounted each on a spring-suspended Townshend platform to decouple the speaker from the suspended wooden floor. This arrangement seemed to work very well.

Soundwise the 702 S2 was thoroughly impressive. Indeed, it was quite difficult to tell the sound quality difference between the 702 S2 and the 802 D3, despite the considerable price differential. Reason does point to the 802 D3 having a wider dynamic range, which is probably true, and a younger pair of ears at the initial listening session did find the top end a little sweeter when the diamond dome tweeter was doing its thing.

However, conversely, in strict comparison terms I actually found the imaging of the 702 S2 marginally superior to the 800 D3, as it seemed to have a slightly tighter midband focus, though both are very good in this regard.

Above all, I simply slotted the 702 S2s into the locations from which I’d removed the 800 D3s, and although the bottom end somewhat lacked the grip and purposefulness of the senior model, its midband seemed very much on a par, and the top end seemed fine (to these ears anyway!).

A major strength of this speaker is undoubtedly its very even overall balance that ensures fine tonal neutrality at all times. There’s no denying that the Continuum FST unit is a worthwhile improvement over its Kevlar predecessor, largely because the lack of presence band aggressiveness has been well controlled alongside a more open sound balance.

During the time I spent listening to the 702 S2, some visitors from Rega came over to install a Naiad turntable. I contemplated changing the speakers as the Naiad costs some ten times that of the 702 S2s, but actually didn’t bother as the speakers seemed perfectly able to distinguish between the turntables and indeed the phono stages we had available. 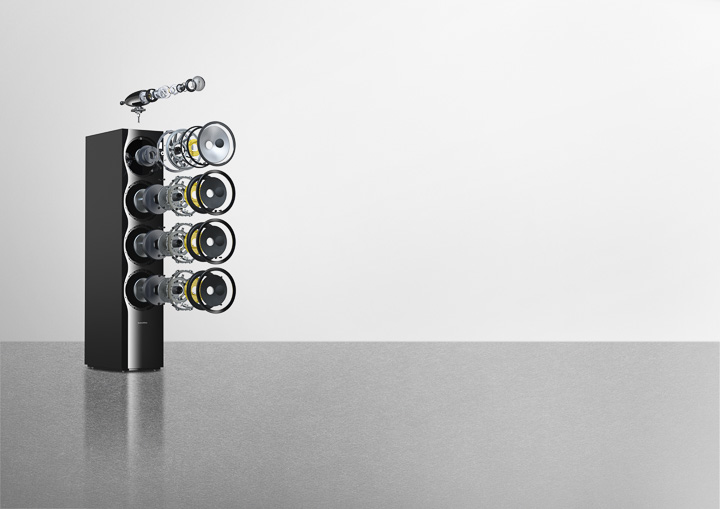 This is a particularly fine loudspeaker, especially considering that it costs so much less than the 800-series models, yet offers a standard of performance that can certainly give the 802 D3 a run for its money. The latter will manage to beat this upstart over the long haul, but the sonic difference between them is nowhere near as large as the pricetag differential might suggest.