It works like this: you get into hi-fi in your teens/twenties, toil away at a decent job for twenty or thirty years, and then realise that life is finite and that if you’re ever going to do what you really want to, now is the time. So you start building audio components and slowly people buy them, and with luck you have a business that is actually satisfying, even if the yacht and the swimming pool are becoming less and less likely to arrive. This may entirely not be the case with Carl and Neil Broomfield who founded CAAS (Class A Audio Systems) in 2006, but I suspect it’s near the truth. These brothers from Yorkshire have useful backgrounds when it comes to audio electronics, as Carl is an engineer specialising in high frequency microwave technology while Neil is a software engineer, and looking at their photos I’d guess they didn’t leave it much more than twenty years before they followed their dream.

CAAS make ‘three/four’ products: the Elysian Pre-amplifier seen here (with a version with built in ladder DAC and network streamer) a standalone DAC/streamer, and the Elysian mono power amplifiers. A fairly typical product range until you realise that pretty much all of it was developed by the company from scratch, which is presumably why it took 10 years to bring the products to the wider market. As the pictures hopefully reveal, build quality is of a very high standard indeed. The machined-from-billet aluminium casework on the Elysian preamp is in the premier league, and this is serious audio engineering even on the outside. Under the skin things get even more extreme; this is a fully balanced line stage with no fewer than 12 discrete regulated power supplies following triple transformer isolation. I was confused by the presence of seven digital power supplies given that this is an analogue preamp, but it turns out that it uses digital control software for the motor drive for the volume pot and resistor relays.

The circuit is DC coupled from input to output. CAAS is keen to point out that there are no capacitors in the signal path, while the buffer stage is a zero feedback, Class A JFET type with DC servo technology to minimise distortion. The volume control is a 128-step relay-based device with fixed resistors for each step, a feature rarely seen in any product with a sub-megabucks asking price. Those 128 steps come in very handy when you want to make small changes to level, both manually and through the remote handset.

Connections are a mix of RCA and XLR sockets, with the latter taking the lion’s share of the inputs. Things are a little cramped on the back panel, but the left/right split makes it fairly easy to connect up. Inputs are numbered to correspond with illuminated dots on the front panel, and you can select between them with a button on the preamp or with the remote control. The handset matches the machined nature of the amplifiers and is a lot more solid than many even at this price; the buttons are rubber and appealingly tactile and you don’t need to be too accurate with your pointing to get the IR signal to its destination. The only foible is that when you press mute there’s no indication of this on the preamp, but it does get very quiet so you can figure it out. 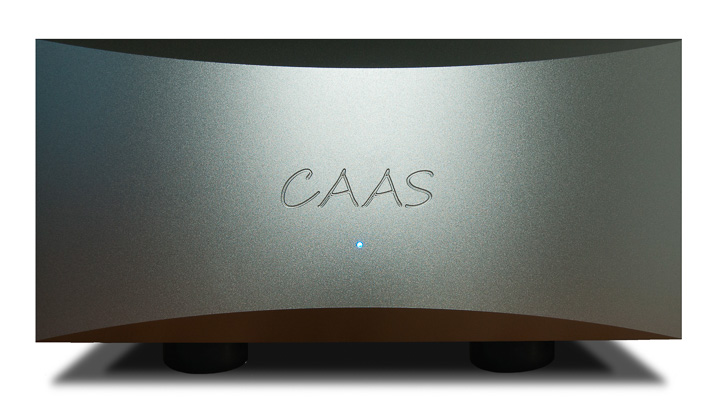 The Elysian mono power amp delivers the first – and most critical – 20 Watts in Class A then switches over to Class A/B up to 100 plus Watts depending on impedance. This output is specified to double into a four Ohm load. Unusually for a powerful amplifier, CAAS does not use feedback, neither locally nor globally, and like the preamp, it is DC coupled throughout and has dual transformer supplies for maximum circuit isolation. There are a lot of other features listed on the site should you need more technical depth, but what really struck me is that the power amps are surprisingly small and easy to manoeuvre for such powerful amplifiers. Connections extend to balanced and single ended inputs with a switch to select either and the usual binding posts for speaker cables. The only other connection is for CAAS’s bus system that allows the preamp to turn the power amps on and off remotely.

I spent quite a while using the Elysian power amps with a Townshend Allegri preamp and have to say that the experience was very gratifying indeed. This is an unusually musical and revealing power amplifier and one which makes you just want to play more music. It has excellent separation of voices and instruments, which makes it easy to hear right into the production, while an apparent absence of overhang or ringing means that timing is nigh on perfect. High frequencies clearly benefit from the Class A aspect, whether it’s cymbals, violins, or soprano voices, there is always lots of clean, open extension with no hint of grain. It’s not easy to produce treble that has both body and ‘air’, but these power amps did so with ease when playing through PMC Fact.8 and B&W 802 D3 speakers, both of which can be very revealing in that region. 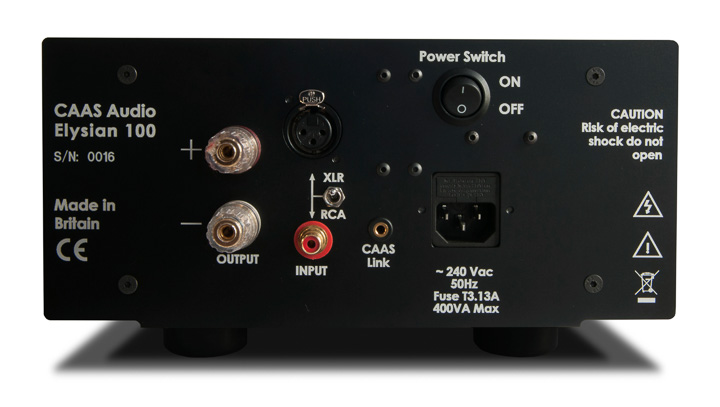 The other end of the spectrum, the bass, is equally impressive. It’s extremely well controlled, but there are no sharp edges where they shouldn’t be, so bass notes start and stop precisely when they should, with no sense of an amplifier exerting control over the process. Some power amps have tremendous grip, which gives very muscular bass, but you can hear the exertion of that grip in a subtle edginess to notes and it gets in the way of the music. These CAAS amps can really punch too, but do so with so little effort that it’s not fatiguing. Instead, the sound is tactile and shapely; acoustic bass notes in particular have a roundness and depth to them that’s beautiful. You can also tell that this is a very quiet amplifier by the degree of resolution they provide for quieter, low level sounds. This is why you can hear so much – it’s not covering up the fine details with the noise floor. What you get is the reverberant and textural detail that is masked with lesser amplifiers. This much was obvious with Charles Mingus’ Newport Rebels [Candid] on vinyl, which, thanks in part to an Audio Technica ART1000 moving coil on the Rega RP10, had a magical realism that was truly transporting and possessed of immaculate imaging solidity. Esperanza Spalding’s ‘Ebony and Ivy’ [Emily’s D+Evolution, Concord] isn’t quite such a good recording, but there was plenty of fine detail revealed by this amplifier – the snare work and the backing vocals both sounded clearer, but remained in proportion to the overall mix. There’s also always lots going on at the periphery of the image, which extends way beyond the outsides of the speakers and helps to form a highly coherent picture of the musical event. Did I mention the bass? Play Deadmau5’s ‘Seeya’ [while(1<2), Astralwerks] and you’ll know what I mean: punch, tiny details and lumps of rock rumbling in the background. This track can be punishing: here it remained musical without any loss of intensity.

Bringing the Elysian preamplifier into the system was initially a bit disappointing. It doesn’t have as much openness as it could and image depth seems curtailed, but further listening made it apparent that the image is projected in front of the speakers to a far higher degree than usual. And, more importantly, once you get used to the presentation it becomes clear that the CAAS trio is one of the most musically engaging and resolving amplification systems around. As a combo, it is unusually even-handed, revealing oodles of detail in a highly coherent fashion. Some will prefer a more overtly ‘open’ presentation, but the CAAS combo makes that approach sound a little exposed, especially at higher volumes. The 802 D3 speakers in particular have rarely sounded better and certainly never timed so well. They are a surprisingly challenging load, so you need power and that usually undermines timing and finesse, but not here. This is a genuine ‘cake and eat it’ amplifier combo of the sort you can forget about and revel in the music without a care. The preamp is relaxed yet focussed, and has bass power that other preamps struggle to match. It is clearly more resolving in real terms than most and reveals detail that only the best alternatives can compete with. I tried it with a different pair of monoblocks, the P6 from Longdog Audio, which produced a lot more ‘air’ but kept the imaging up front at all times. This showed the CAAS to be consistent, and did not undermine the performance of the system, really filling the room with sound in the process.

Carl and Neil are to be congratulated. This pre/mono power combo is not only built to the highest standards, but makes high-resolution music with an effortless musicality that’s very hard to turn off. Audition if you dare.