We’ve blown more than a few column inches on AURALiC’s G2 system, and for good reason; the ARIES G2 Wireless Streaming Transporter, VEGA G2 Streaming DAC and LEO GX Master Reference Clock work together to deliver one of the finest streamed digital sounds you can get, irrespective of price. The system is completed, however, in the AURALiC SIRIUS G2 Universal Upsampling Processor.

The nature of the SIRIUS G2 does create a bit of a conundrum for the reviewer. Do you review it as the last part in the big AURALiC jigsaw, as a standalone upsampler for equally high-grade systems, or both in and out of AURALiC’s matching products? I went predominantly for context rather than comparison, but in reality, what applies in the AURALiC stack holds equally well elsewhere. So, it sits in the now four-tier stack of AURALiC – with the ARIES G2 at the head of the table, the VEGA G2 connecting the whole caboodle to the next device in the chain, and the LEO GX and now the SIRIUS G2 making each component give its best possible performance in that system. 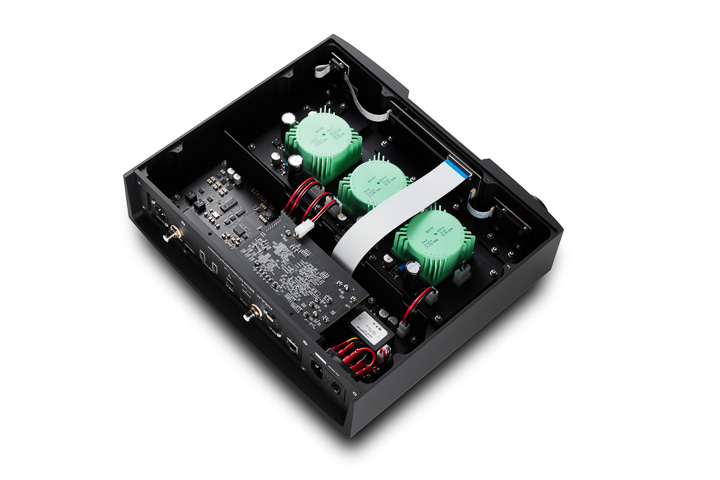 Of course, this means a lot of potential ways to configure the system, as you will be looking at something like an Ethernet connection on every box, and inputs like coax or USB on three out of the four boxes. Which goes where for the best sound? The reality is there is a lot of redundancy or upgradability (depending on viewpoint) here. Taking the slow route to full AURALiCOSITY, you will likely start with the VEGA G2 DAC, amassing all your source components to play them through that device on its own. From here, most will likely go with the ARIES G2. This Streaming Transporter acts as a bridge product, collecting all the digital inputs in one dedicated place and controlled by the Lightning DS app. Just one Lightning Link cable connects all those sources to the DAC, and instead of taking some kind of proprietary route to create this high-speed digital connection, the company uses HDMI connectors (even if the connection itself is not run as part of the HDMI protocols). This makes adding in the additional products a breeze; the next in line is the SIRIUS G2 tested here, which requires a single Lightning DS connection to hook all three devices together, and then the LEO GX requires three cables to link all four devices together.

This relative simplicity of connection between the devices (once explained) not only makes sense but works out cheaper than many of its rivals. A full dCS Vivaldi stack – for example – requires five AES/EBU and five BNC connectors; twice as many connectors and twice as many types of connector. While you can still spend big on cables in the AURALiC stack, the company has taken a shine to AudioQuest’s Diamond HDMI.  Depending on whether you use them for the digital audio pathway only or both digital and clock pathways, that’s anywhere between £2,000-£5,000 on inter-AURALiC cabling, which compares favourably with the £35,000+ worth of Transparent XL cables used in many dCS Vivaldi demonstrations. Granted, the four-box dCS includes a CD/SACD transport, and the comparisons begin to run out of puff when comparing hardware as well as connections, but it is worth noting that the commonly-used connections for the dCS Vivaldi (commonly top-end Nordost and Transparent) routinely cost more than the AURALiC stack and all its own cables!

The SIRIUS G2 itself is substantially built and relies on AURALiC’s digital smarts as well as its best modules to make it a step up on run-of-the-mill devices.

Some of the more outlandish products in this sector act like beachheads; they force you to change direction. You start out with one brand of DAC, but pretty soon the sheer weight of electronics means the DAC you started with gets the boot. The AURALiC concept – although more than good enough to make such changes extremely valid – is different; instead of forcing you to view everything digital through an AURALiC-shaped filter, the SIRIUS G2 simply brings out the best in your existing products. Granted, its abilities gently coax you into exploring more in the AURALiC line, but the idea here is that you already made an informed decision buying that good DAC and streamer and you don’t need to remake that decision in the light of an upsampler, no matter how good. In fairness, I suspect those who have already gone far down one of the many alternate rabbit holes (CH Precision, Chord Electronics, dCS, Esoteric, Wadax, etc) will have a matching upsampling and clock solution, or have one in their sights, but it’s good to keep the options open.