The Reference 10 models – a matching two-box phono stage is also available – stand apart from the rest of the range. They are effectively beyond the flagship of the Audio Research range and move into a new realm; the mainframe preamplifier.

In fact, it’s not a new idea for Audio Research at all, it’s just been lying dormant for a while. Traditionally, the company built its flagship designs in twin chassis – most notably the classic SP10 from the 1980s – but even in that vaunted company, the Reference 10 is big. Power-amp dwarfing big.

One of the two large chassis houses the source connections, display, and logic circuitry; the other is the power supply. They are connected by thick Burndy multi-pin cables of the type used by Naim Audio for its top-end devices. These are thick, inflexible, and designed to carry power from device to device with the maximum amount of internal screening, so there is no possibilty of one power supply feed interacting with the others. 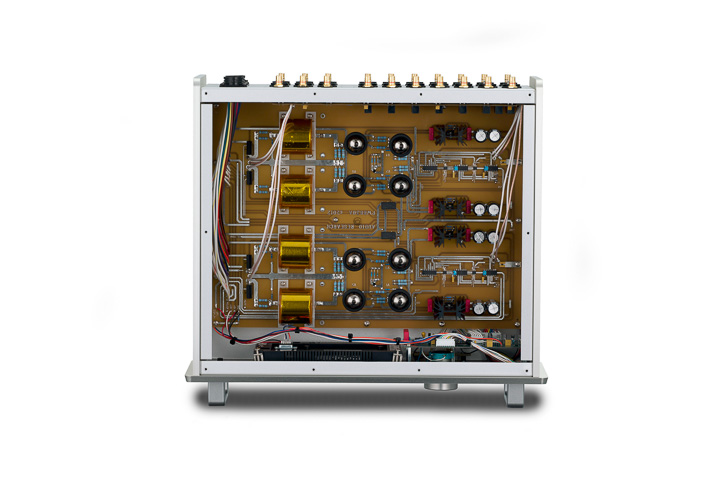 That control box is comprehensively supplied, with seven line inputs (technically six and a processor), all running XLR balanced or RCA single-ended. There are three similarly specified outputs, one of which is also destined for processor use. The Reference 10 is also heavily logic controlled, from the timed 40-second standby in power-up to the assignable input names on the large green front panel touch display, everything is driven by the on-board logic circuits. However, using touch screen control does mean the volume control knob has a genuine 104-step attenuator sitting behind it.

Allocating most of the Reference 10’s control surfaces to a touchscreen does result in a very minimalist front panel, with just the aforementioned volume control, hard buttons for power and mute and an eye for the remote control. However, this positively bristles with more gadgets than a 1960s spy movie compared to the front panel of the power supply box, which has a LED and nothing more. 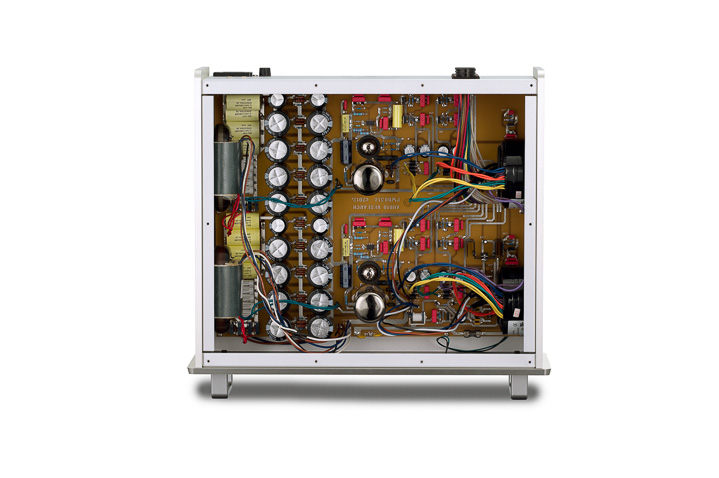 There are a lot of valves in this preamplifier. More than most valve pre-power combinations, in fact. The eight 6H30P double-triode tubes in the line and gain stages are joined by two 6H30P and two 6550C valves in the power supply. That’s more or less like having a small mono power amplifier with valve rectification being used to drive a preamplifier. In preamp terms, that’s overkill’s big brother.

Stylistically, the Reference 10 is in something of an odd place, straddling the product design of ARC preamps of old, without the aesthetic of the latest Foundation and Reference line, and being something of an outlier. Not that anyone who is going to invest in the Reference 10 will care at all; this is all about the sound and the performance, not how it looks on the rack. Given each box is larger and heavier than most preamps, and cost more than twice the price of their Audio Research Reference siblings, the Reference 10 (both line and phono) having their own style is probably no bad thing. 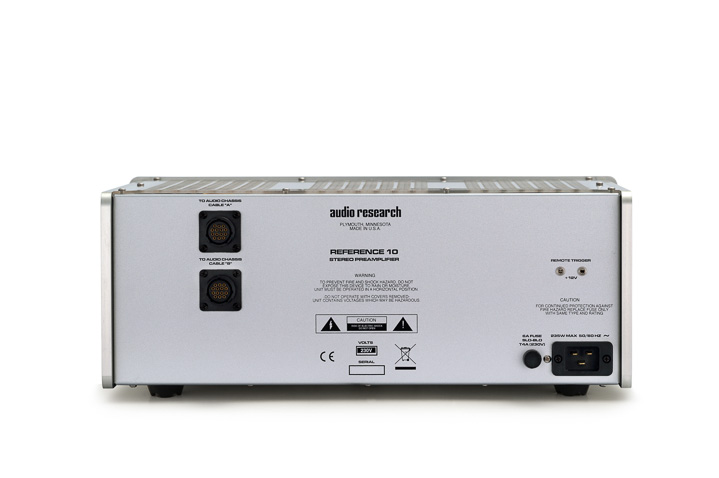 The Reference 10 is not for everyone – the price itself is a self-sealing function of that even before anything else is taken into account. But perhaps even more importantly, the Reference 10 is only really a viable option for those willing to push the limits of what can be resolved in an audio system. As a result, it’s the kind of device that demands an absolutist approach to system design; the phrase ‘we’ll wing it’ is alien and meaningless to the Reference 10. Even shortening the name ‘Reference 10’ to ‘Ref 10’ seems wrong here… it would have been like referring to Gregory Peck as ‘Greg’; it’s just not done. Put a foot wrong anywhere in the system and the Reference 10 will point it out. A track where the recording or mastering engineer didn’t bring their A-game to the party is given the same uncompromising stare. Here’s the degree of observation required; some systems will suit the Reference 10 with power supply below the control box, others will require the two boxes sitting side-by-side… and will demand the same attention to detail in other links in the chain. For my part, separating control and power supply on their own respective ‘brains’ and ‘brawn’ stacks didn’t make as much musical sense as one atop the other on their own shelves. Your mileage may vary. Perhaps that is the reason for the design; if it were Audio Research’s ‘bling’ super preamplifier, there would be those with very deep pockets who would buy it for its looks and status. Consciously and actively making the Reference 10 look so completely businesslike means those drawn to a ‘mug’s eyeful’ will leave the Reference 10 to the enthusiasts. The kind of people who know when to use and not to use balanced. And the Reference 10 is the place for balanced operation.

When placed in as uncompromised a system as you can muster, the Reference 10 opens up a musical world that remains out of reach for most. This is authoritative without being authoritarian, nimble without being lightweight, stentorian without being overblown, dynamic without being intense, detailed without being etched, and so on. Tonally, it just sounds ‘right’. A good preamp (and they are rare) either gets out of the way of the music, or makes a good sound that makes that ‘getting out of the way’ part less important.

This isn’t just about hearing more from your recordings, although that is what first attracts you to the Reference 10’s performance. It’s like a reset button on your music. Tracks you know so well aren’t just replayed as if it were the first time you heard them; they are rebuilt note-by-note in front of you, opening up that music in ways you can’t anticipate until you experience them. Yes this is about detail, space, and dynamic range – Bernard Purdie’s drum pedal on ‘Memphis Soul Stew’ [KIng Curtis Live at Filmore West, ATCO] has a squeak that really high-resolution systems can resolve. Many of those are brutally analytical rendering the track hard to hear because of that ever-present squeak, but the Reference 10 forces you beyond that, to a point where it is just a part of the musical whole again. It’s just this time, there are so many more parts to that whole. Let’s put it this way; anyone who was actually at that concert almost 50 years ago might have heard that squeaky drum pedal, and I guarantee not one person walked out of the concert because of that squeak. That’s how the Reference 10 pushes ahead of the competition. That’s not to say the preamplifier is forgiving, but instead is so informative that detail alone isn’t enough; it’s like you get a new set of ears  with the Reference 10 and they take everything in! Going back to more real world preamps is an exercise in disappointment. 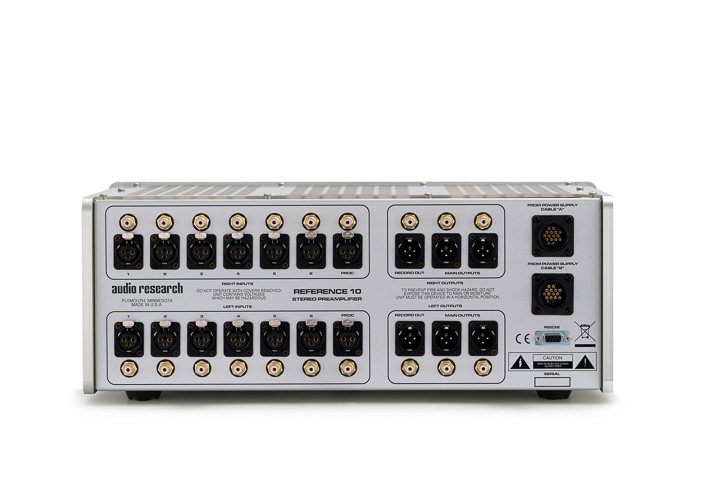 What you learn from the Audio Research Reference 10 preamp is just how deep ‘good enough’ goes, and just how much more you can get from a system if you set ‘good enough’ aside. What you also learn from the preamplifier is that is as much about the listener as it is the system, or even the music played on that system. Many will be content with simply having a system that sounds excellent, but if even that degree of insight is not enough and if you are up for the challenge laid down by the Reference 10 preamplifier, the rewards are remarkable.

Distributed in the UK by: Absolute Sounds