In a way, that notion of audio ‘respecting the old ways’ holds truer in the H-5500 than it does with most ‘hollow-state’ devices; Allnic uses four ‘NOS’ E180CC double-triodes in the circuit. These are valves that show how KS Park is not simply following well-trodden circuit designs from the 1950s and instead has investigated the best devices for the job. The E180CC was developed for post-war, pre-transistor computer circuits back in the day when a country was at the cutting edge if it had more than one computer. Allnic bought thousands of these devices, and while that ties you into having to go to the manufacturer to source new valves should these devices fail, the chance of failure is almost zero (their original intended use meant they were designed with a 10,000 hour heater lifespan, as no computer engineer of the early 1950s wanted to wade through thousands of tubes in hundreds of electronic ‘gates’ to find a blown tube every time that UNIVAC 120 was powered up). Alongside the four E180CC, the H-5500 features a 7233 voltage regulator and 5654 voltage correction tube, all held in clear tubes with aluminium vented tops, which is a neat way of getting around modern safety requirements without ugly cages and the like. 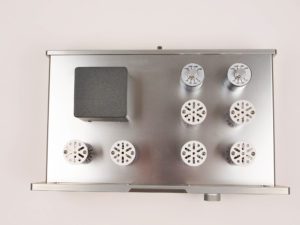 The ‘respecting the old ways’ concept naturally has a safe haven in a vinyl and valve front-end, but the Allnic is unapologetically retro in sound too, and I think that’s a good thing. People have come to love vinyl for its satisfyingly ‘un-digital’ warmth (even, paradoxically, when the LP is cut from a purely digital recording), and the H-5500 brings that warmth out in a charming, truly enjoyable manner. Granted, that probably means those who want that forward, upfront sound found in many modern systems are unlikely to be Allnic customers, but on the other hand, those who find that sound too upfront and shiny will find a heck of a lot to like here.

The first element that hits you with when listening to the Allnic H-5500 (after a good 50+ hour run-in) is the imaging, and especially the image width, depth and the positioning of instruments within that image. This sounds extremely natural, too; even when the soundstage is generated by reverb and pan, it makes a fine approximation of soundstage spacing, and when the stage is generated acoustically – such as with the overture to The Pirates of Penzance [D’Oyly Carte, RPO, Isidore Godfrey, Decca SXL] – the sound is pin-sharp precise, with the sort of ‘walk in and around the soundstage’ holography that is at once hard to find and so enjoyable when you do.

Perhaps more importantly, and again sticking with the same recording, there is so much going on and all of it is portrayed in a real-life way. This is a classic Decca Tree recording, so you are never going to hear the sort of string squeaks that you get from placing a microphone inches from the soundboard of a violin, but instead you get a sense of the instruments reacting to how they are played, with very small changes in level and tonality that show both the quality of the musicianship and the reason why many of these recordings remain the benchmark in recording quality some six and a half decades after production.

Moving around the record collection elicits the same response. The grooves and the tracking of the cartridge give up before the H-5500 runs out of dynamic puff; even notably thin but powerful rock recordings like ‘Prime Mover’ by Zodiac Mindwarp and The Love Reaction [Tattooed Beat Messiah, Vertigo] benefit from the Allnic’s ability to get out of the way of the music, its exceptional detail and its overall warmth and rich sound, and the space it creates around the instruments. This is a typical late-80s Bill Drummond (of the KLF) recording, full of sound and fury and a lot of over-the-top pomp, but it stays distinctly on the right side of listenable even today… and that’s quite a feat.