If you cast your mind back to the early days of Warwick Acoustics, its first product that set the wheels in motion for its high-end and even automotive plans, was the Sonoma M1 electrostatic headphone and amplifier. Although largely eclipsed by the APERIO system, the Sonoma M1 is still on Warwick Acoustics’ books. At least, for now.

The BRAVURA is the result of three years development into Warwick’s unique HPEL (High-Precision Electrostatic Laminate) drive unit, the core of Warwick’s transducer system for its headphones. It’s designed as a direct, drop-in replacement for the Sonoma M1 Headphones, so those with the original matching Sonoma M1 Amp can simply buy a new pair of BRAVURAs. It’s also available as a complete kit, including the Sonoma Amp. The latter is also available in a spiffy new black finish to run alongside the existing deep brushed ‘Silver’ model. This ‘Black Edition’ and the Silver Sonoma amps are available separately, with the idea that owners of the original M1 who fancy a bit of a change to the desktop can buy a new amp/DAC. I think what’s more likely is Sonoma M1 owners will try the BRAVURA with their existing DAC, end up keeping both headphones, and adding a second Sonoma amp/DAC for a second room system at a later date. For reasons that will become clear later, I think the number of people who will try the BRAVURA system and decide the M1 is still for them is likely fairly small. Regardless, it’s good to keep all the options open. 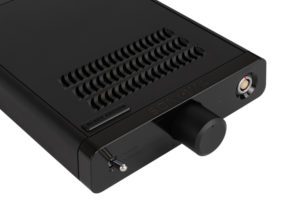 A lot has happened since the original Sonoma M1 launched, and given the similarities – and more importantly – the differences between Sonoma M1 and BRAVURA, it’s worth climbing into the Wayback machine to run through that Sonoma M1.